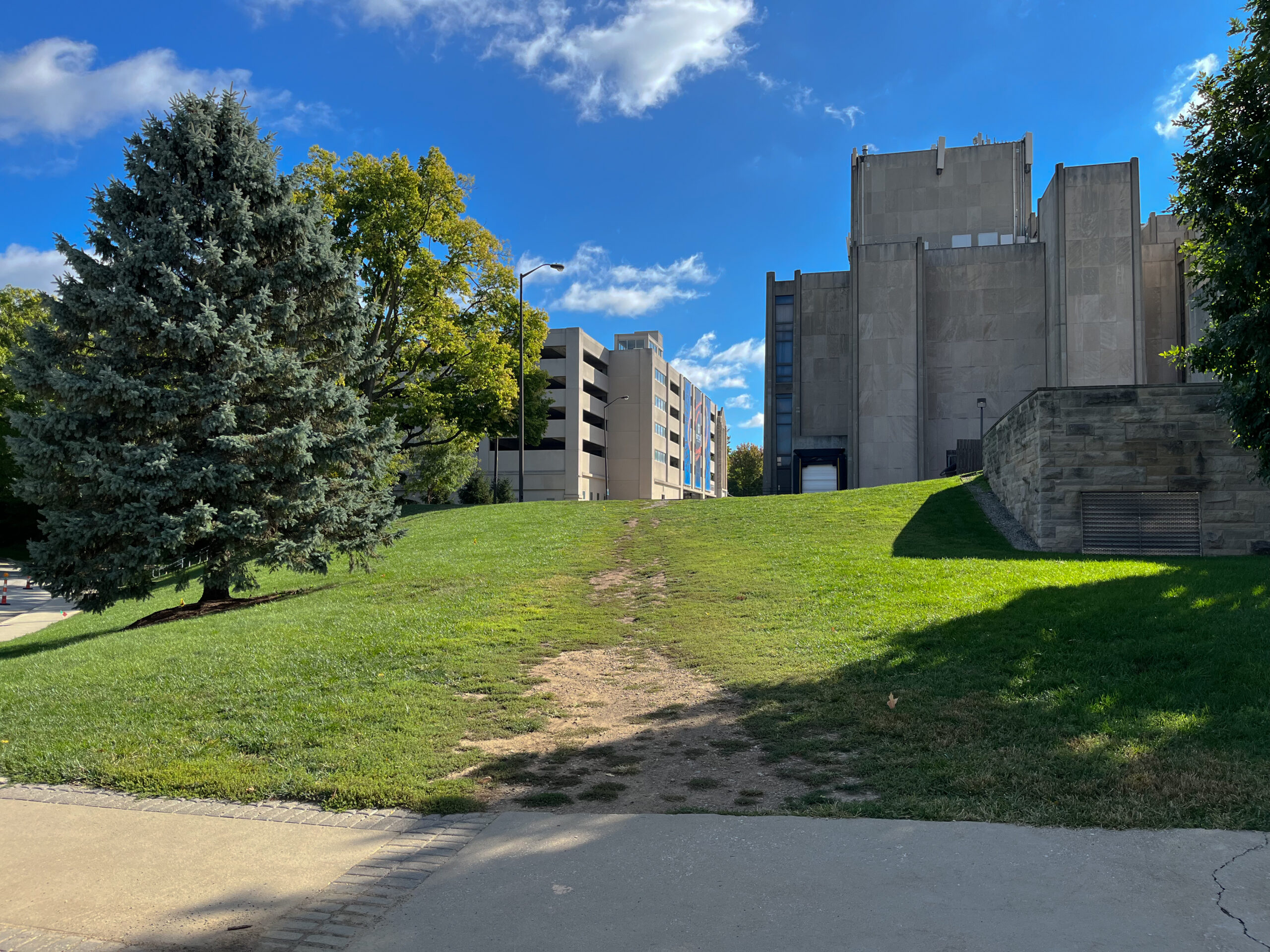 One of the many desire paths that students roam on campus. Photo by Julian Cirnigliaro.

I am a serial shortcutter. If the shortcut through the grass saves me two feet, I’ll take it — there is never a paved path where I need one. Unsurprisingly, this is a sentiment felt by many Butler students, and the evidence is in the paths.

All around campus, there are strips of grass that students have worn down to dirt, mud and rocks. These are called desire paths. It’s the path we want, but not the path we have. In the same way that I lazily cut corners and take shortcuts, many brave off-roaders around campus take the road less traveled.

In case you’re wondering why students create these alternative paths for themselves, Sarah Miller, a sophomore web design and development major, has an answer.

“Lazy” and “efficient” are synonymous in this context. Why work harder or walk further when you could work smarter and walk shorter?

Sophomore biology major Ali Mohamed knows little about desire paths except for the fact that he uses them. Even Mohamed can guess why students prefer off-road trails.

“[The rationale for using desire paths has] got to just be laziness,” Mohamed said. “I think part of it too is that I don’t want to cut through the grass sometimes because I don’t want to ruin my shoes. But if I see [the desire path] is already laid out for me, then I know people did it before, so it’s ok.”

So for those of you who need a shortcut, but also need to keep your shoes clean, pre-made desire paths are your answer. While they aren’t as clean as the sidewalks might be, it’s still a quicker route and will leave your shoes cleaner than the grass.

The Starbucks patio shortcut is easily the most recognizable desire path on campus. The path has many interesting components about it. The bushes have suffered from the development of this desire path; the gap in the bushes creates a more inviting route to and from the Starbucks patio. However, the shortcut is also known for its perilousness. The muddiness and slushiness of the treacherous path after a big rainfall sears this trail into the collective memory of Butler students.

Claire Willis is a junior criminology and psychology major who is very familiar with desire paths. Willis co-runs an Instagram account documenting desire paths with her friends from home on their respective college campuses.

Willis, as a desire path connoisseur, feels that the Starbucks patio path is quite convenient.

“I think it’s one of the best ones on campus,” Wills said. “I like it because you feel a little bit weird walking into the bushes … especially when people are sitting at those tables, … But also, why do I have to go all the way around, and why is there not an easier path to get from the side?”

As Willis mentioned, the Starbucks path is sometimes blocked by an unassuming studier on the Starbucks patio. This is the only con to using this desire path: you never know who will be on the other side of it. This blockage usually ends with the desire pather squeezing by the studier awkwardly. However, if you would rather avoid any chance of these awkward interactions, I have plenty more paths to recommend.

The ivy-covered path by the mall. Photo by Hallie Anderson.

The ivy-covered Atherton path is not as flashy as other desire paths on campus. It is thin and winding, but it is effective, and that’s all that matters.

This path may feel unnecessary as it spans the width of a median surrounded by the paved sidewalk. However, the ivy path is a game-changer for the freshmen trekking from Irvington to Residential College and vice versa. The sidewalk from ResCo runs directly across the mall and into this desire path. Rather than subverting the median, student after student has decided to walk right through it. Now, the ivy bed refuses to cover the path. If you need to kill ivy, this is the way to do it.

The trail is understated, but it is used often. In a metaphorical sense, this path connects friends and lovers across different residence halls. This path carries on its back the weight of every long-distance ResCo-Irv relationship. Not only does this tiny path support every “long-distance” relationship on campus, but it goes above and beyond by doing so with grace and humility.

The peaceful desire path from Jordan to Starbucks. Photo by Hallie Anderson.

Moving away from the mall, there exists a pleasant corner-cutting desire path coming from Jordan Hall toward Starbucks. This path makes sense to me.

Miller believes that people would rather not tire their legs by walking an extra few feet. When it comes to the scenic Jordan path beneath the trees, Miller got straight to the point.

“I’d say [that corner is] very inconvenient, so I like the desire path,” Miller said.

It’s as simple as that. Desire paths are a matter of convenience, and this one fits the bill. The way the path unwinds beneath the trees and fades into grass just before it ends makes the walk quite pleasurable.

When you walk this path at the right time of day, the sun will peak through the leaves overhead and shine over you as the wind blows through the trees. Because the path is also a bit more secluded than the ones around the mall, I feel, for a brief moment, like I’m taking a walk in the woods — but only under two trees. There is truly no better feeling than following this desire path.

The unpaved Jordan Hall desire path is pictured under the snow of Feb 2022. Photo courtesy of @pesiredaths on Instagram.

Finally, there’s the formerly treacherous but newly paved Jordan to B-lot escape. This trail was once comprised of a trench in the barren, hard dirt and fully decorated with pebbles and rocks. The incline of the path made it far more threatening than the average desire path. This path was certainly necessary, and students proved its necessity when they walked the unpaved route despite inclement weather and icy trails.

Butler University must have noticed the desires of desire pathers when they paved the path before this school year. Now, despite the sidewalk, you can still see the remnants of the barren dirt path along the side of the fresh concrete.

The newly paved entrance to Jordan from B lot. Remnants of the previous desire path run along the side of the pavement. Photo by Hallie Anderson.

“It shows the will of the people,” said Mohamed.

This paving represents a victory for desire-pathers everywhere. Our footprints are now covered with concrete, but we must never forget who built this path in the first place — the people.

The walkway is just as much a desire path today as it was pre-pavement because the desires of the people created it. Pavement doesn’t dictate desire paths: desire does.

Most desire paths exist in high-traffic areas on campus, but if it feels like there’s never a path when you most need one, make your own. You’ll see examples of trailblazing students’ pathwork across campus. While the mall paths are the most obvious creations, the subtle, delicate ones are just as effective. So look for desire paths and stomp out some new ones.