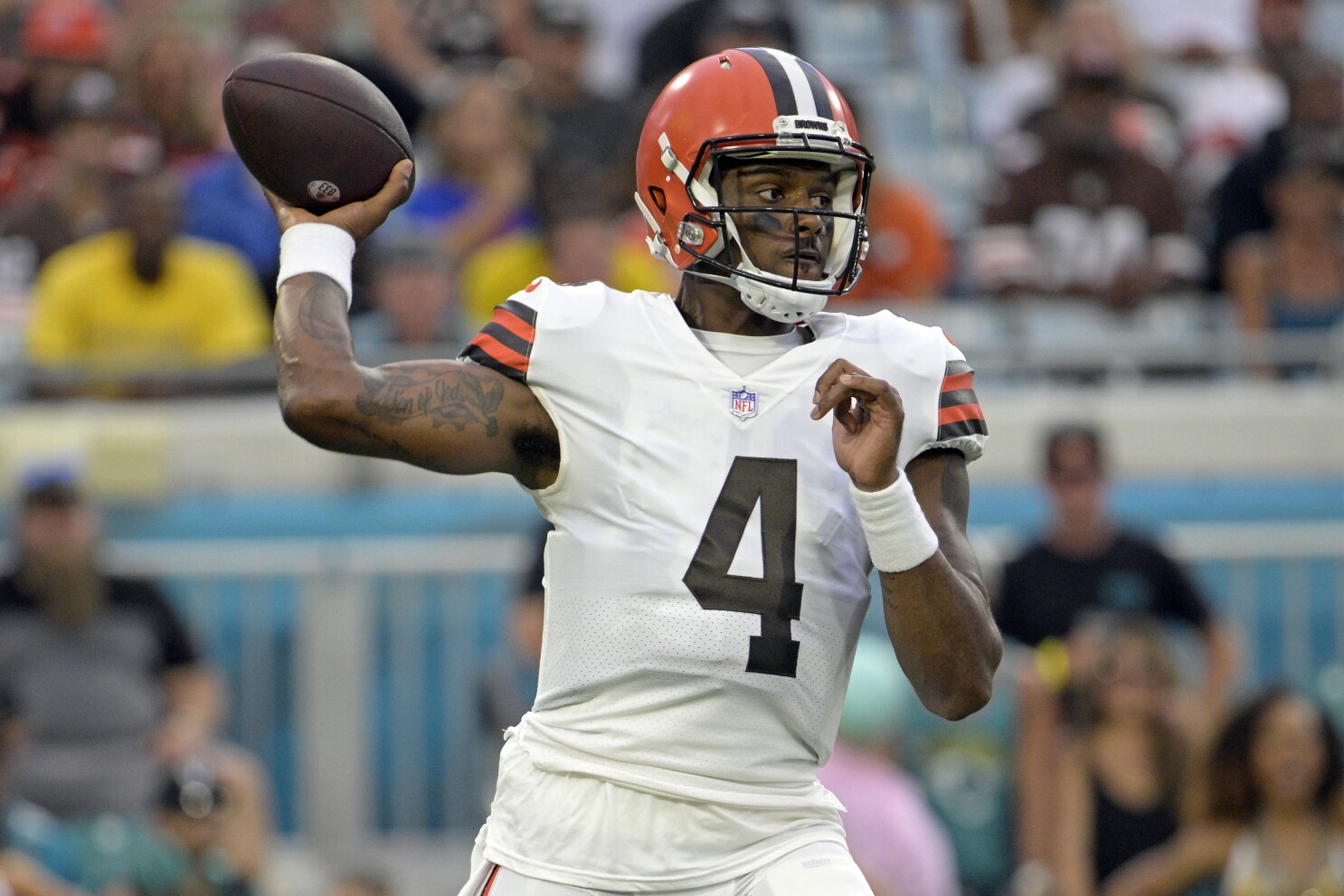 Cleveland Browns Quarterback Deshaun Watson takes the field for the first time since 2020 on Friday Aug. 12 after 24 accusations of sexual misconduct. Photo courtesy of latimes.com.

The Cleveland Browns have been known for their 0-16 record, “The Drive” and “The Fumble,” but never a player accused of 24 sexual misconducts .

On Aug. 18, the NFL and NFL Players Association — NFLPA — officially reached a settlement on the Deshaun Watson disciplinary matter. The settlement agreed that the Cleveland Browns’ quarterback will serve a 11-game suspension with a five million dollar fine.

Watson denied the claims by over two dozen women and settled 23 out of 24 of the lawsuits. Two Texas county grand juries declined to charge him criminally.

A New York Times investigation published in June showed that Watson had booked massage appointments with at least 66 different women from the fall of 2019 to the spring of 2021. The report contains accounts from the therapists that suggest Watson had partaken in “questionable behavior” when seeking the massages. Someone who claimed innocence would not need 66 different women for this job.

Initially, Watson was suspended six games by Judge Sue L. Robinson, the retired U.S. judge appointed by the NFL and NFLPA. The league decided to appeal the decision in hopes of adding on more games. Does the NFL really want to suspend a talented quarterback though, no matter how many women accuse him?

It seems convenient as well that Watson’s debut for the Browns will be against the Texans, his former team, which will make great TV.

The contradictions made between Watson’s recent and previous statements are extremely significant. The quarterback’s claims of innocence began in March when the Browns first wrote him a $230 million guaranteed contract – giving him the highest guaranteed contract in NFL history.

“As I mentioned before, I never assaulted any woman, disrespected any woman,” Watson said at his opening press conference in March.

Now, Watson has apologized for the pain he has caused and the women who have been hurt by the situation.

“I apologize once again for any pain this situation has caused,” Watson said after the suspension announcement. “I take accountability for the decisions I made. My focus going forward is on working to become the best version of myself on and off the field and supporting my teammates however possible while I’m away from the team. I’m excited about what the future holds for me in Cleveland.”

Watson has not played in a regular season NFL game since 2020, when he decided he was done playing for the Texans. He took the field for the first time in two years when he started for the Browns in their preseason game against the Jaguars. Jacksonville fans booed and chanted while the 26-year-old led the offense. Do not expect the hostility towards Watson to disappear after his eleven game suspension.

Some fans, however, have taken full support of the quarterback, holding signs with “Free Watson” or T-shirts with “Give me a massage!” written on them, a classless display of ignorance towards victims of harassment and assault.

The Haslam family, Jimmy and Dee, have owned the Browns since 2012. The family claimed that Watson was remorseful although Judge Robinson, whose decision they reportedly respect, remarked that the quarterback had an extreme lack of remorse about the situation.

“Now that a decision on discipline has been reached, we understand this is a real opportunity to create meaningful change and we are committed to investing in programs in Northeast Ohio that will educate our youth regarding awareness, understanding, and most importantly, prevention of sexual misconduct and the many underlying causes of such behavior,” Haslam said. “Since Deshaun entered our building, he has been an outstanding member of our organization and shown a true dedication to working on himself both on and off the field. We will continue to support him as he focuses on earning the trust of our community.”

Sadly, investing in programs in Ohio regarding sexual misconduct will not take back the actions of their contracted quarterback.

Women have all the reason to be offended by how the NFL and the Browns handled the serious accusations. The lack of remorse and punishment has been a trigger for many women around the world, not just in Cleveland.

Sophomore business major Rowan Dawson, reacted to the NFL’s ruling and the negative effect it has on both the women involved and women around the nation.

“I think that if he has allegations against him and lawsuits, he should not be allowed to play just like how a person of political power should not be able to be in office if they are under investigation,” Dawson said. “I just don’t think it is fair to only see an 11-game suspension when so many women were hurt.”

Before the decision was made, it was reported that 23 of the 24 lawsuits had been settled. Even after the settlements and the suspension decision, Watson still neglected to directly publicly apologize to the women.

People of prominence often get a slap on the wrist regarding major incidents and athletes are no exception. Sadly, this incident is not the first time that the NFL has failed to adequately hold players accountable following cases of violence and harassment involving women. Ben Roethlisberger, former quarterback for the Pittsburgh Steelers, has been accused of rape twice. After these incidents, Roethlisberger was only hit with a six-game suspension.

How can the NFL continue to disrespect women with these slight consequences for serious accusations?

It continues to disrespect women because an institution run by rich and powerful men has nothing to fear and won’t change until new and diverse leadership steps up to fix it.