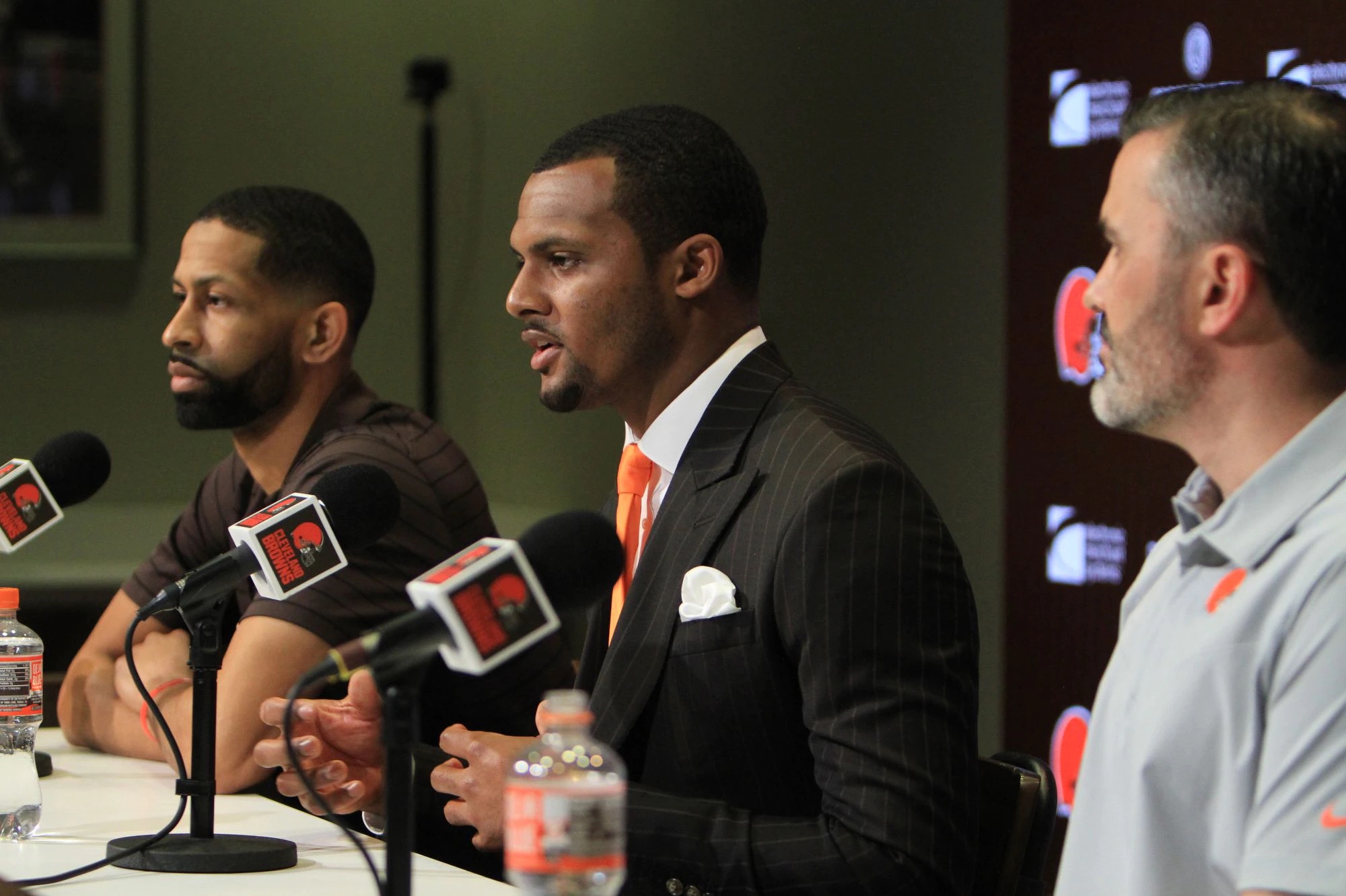 It is a confusing time to be a Cleveland Browns fan, as in the last few weeks the team went from a relatively stable situation with former first-overall pick quarterback Baker Mayfield to a confounding one, Deshaun Watson. As a woman, this controversial trade hits particularly close to home: Watson has been accused by 22 women of various levels of sexual misconduct and assault.

Though they apparently performed an “extensive” investigation into the allegations, the plaintiff’s attorney, Tony Buzbee, told ESPN that the Browns never reached out to him or spoke to any of his clients.

Watson signed a large contract with Houston prior to the 2020 season, but requested a trade before the allegations came to light. He was inactive for all 17 games during the 2021 season.

When the time came for teams to meet with Watson, the Saints, Falcons and Browns were among the top teams considered. The Browns initially were ruled out of the running on Watson, and most reports expected the Falcons to triumph. Watson ultimately chose Cleveland which came as a surprise to most fans.

Trading for the controversial quarterback has undoubtedly divided the Browns fanbase. After many years of losing records, disappointment and chaos, Cleveland fans still were not prepared for this new set of circumstances. Remaining loyal through the 0-16 year almost felt easier than this decision.

In the wake of the trade, some fans have left the Browns fandom completely, assuring they will not support an organization that has made the decision to sign Watson. Others have embraced the talented player on their team now with hopes to possibly win a championship in years to come. The last group of fans are waiting for the NFL and the justice system to hand out their punishments before forming a concrete opinion.

First-year finance major Annie Rose, a Cleveland native, falls under the category of uncertainty surrounding the status of her fandom.

“I think right now, it’s hard to be a fan of Watson,” Rose said. “With the civil suits against him, it’s hard to look past those actions and see him as a good player. I’m hopeful that, if true, the Browns will address his wrongful actions, but if it’s not true, then I think, with Watson, it would be a new era of football in Cleveland. This trade, in my opinion, could be a major high risk, high reward deal.”

Last Friday, Watson made his first appearance in Cleveland and spoke in front of reporters for the first time since being traded. Browns general manager Andrew Berry and head coach Kevin Stefanski sat alongside him.

Watson’s press conference was filled with controversy and difficult questions. Watson affirmed several times that he is innocent, but that he understands how serious the accusations are.

“I understand the situation is very difficult, especially the women’s side of the fans in this community,” Watson said. “I am not naive to that. These allegations are very, very serious. But as I mentioned before, I never assaulted any woman, disrespected any woman. I was raised by a single parent mom who has two aunties as her sisters. I was raised to be genuine. I have always defended that and I will always stand on that. I just have the opportunity to show who I really am in the community.”

Watson reiterated that he does not intend to settle the civil suits and intends to clear his name as much as possible.

Although he is supposed to be Cleveland’s leader as a quarterback, believing a man versus 22 women is very difficult as a female Browns fan. It is complicated to understand why the organization put themselves into this position, but with a decent probability that he will step onto the field this season. The Browns front office decided to put football before their honor.

The Browns owners Jimmy and Dee Haslam who met with Watson in person before trading for him did not attend the press conference, but instead hosted a Zoom meeting later that day for the media to attend.

“In research we did directly, in research third parties did, we got comfortable with the situation,” Jimmy Haslam said. He also added that the idea to acquire Watson originated from the front office, not ownership.

This month, two Texas grand juries declined to file criminal charges against Watson. He remains under investigation by the NFL and will most likely face a suspension by the league.

Those who stand with Watson believe that the grand jury’s decision to not indict him makes him completely innocent. This is false; the courts’ conclusions are yet another example of how sexual assault cases are often declined in court due to a lack of evidence. Many survivors do not feel comfortable speaking out for this very reason, which is why the Browns decision is questionable in many ways.

The future of the Browns remains uncertain, as Mayfield still needs to be traded elsewhere and fans are unsure of where to stand with their team and organization.

On paper, the Browns are a Super Bowl contending team, but what did it cost them to get to this point?