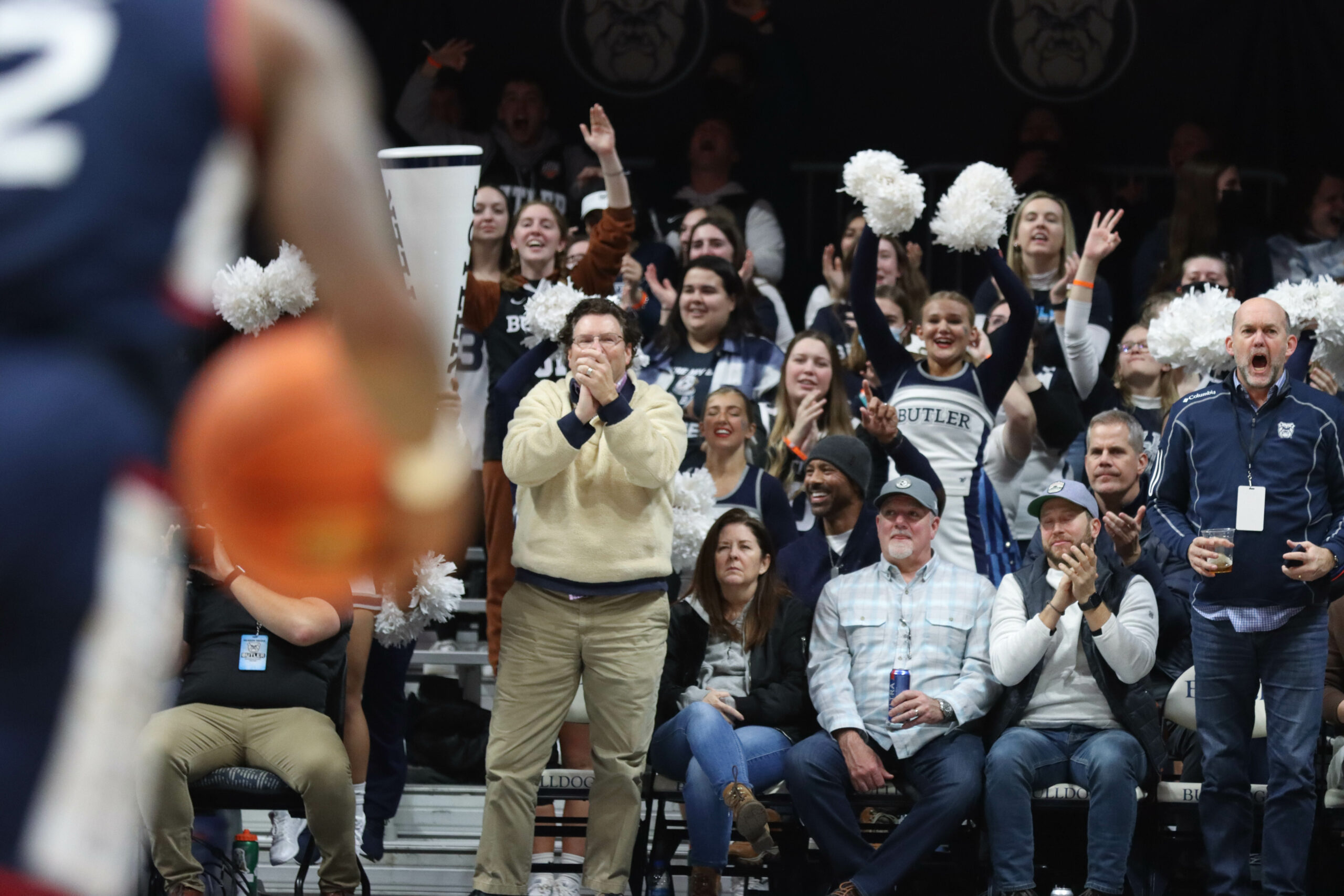 Bulldog fans cheer in Hinkle during a game against UConn on Jan. 20. Photo by Francie Wilson.

What a weekend it was for Butler men’s basketball fans. There were definitely mixed emotions for fans as to what the future held for Butler basketball following the loss to Providence in the second round of the Big East tournament to end of the 2021-22 season.

Some were passengers on the “Fire LaVall” train, which took off while Butler was experiencing tough loss after tough loss in the middle of the season. Others were more patient and believed that despite the team’s woes, Jordan should be given one more season to set things right.

Whether you expected it or not, Jordan was ultimately relieved of his duties on April 1. Butler waited over three weeks after the end of their season to let Jordan go because reportedly there was a clause in his contract stating that his buyout went down on the day he was let go. Less than 48 hours later, Butler found his replacement.

On April 3, it was announced that Butler alum and former head coach Thad Matta — the alleged godfather of “The Butler Way” — would return home to take the open coaching position. It was a somewhat shocking announcement, as Matta has been away from coaching since 2017 due to medical issues. Nevertheless, if Butler wants to see a push in the right direction, Matta is more than capable of being that guy.

For a school that lives and breathes Butler basketball, students most certainly had things to say about all these changes. Avid fans, casual fans, members of the pep band and dance team and a senior basketball team manager all gave their opinions on what these changes mean for the future of the program. Here are their reactions.

What was your opinion of LaVall Jordan during his time at Butler?

Jon Gluth, third-year pharmacy major, trombone player in pep band: “I was really irked when I saw that his buyout went down by a lot on April 1 — and that was the day he was fired. I was in the car on my way to a convention in Cleveland when that came through and I was just like ‘Snake.’ Like LaVall has been everything you could have asked for as an ambassador to the university, I’m not saying coaching-wise. He’s been an amazing guy, he’s an alum, he played here and he deserved way better treatment than that.”

JG: “Players sometimes [care] and they sometimes don’t about the band. We know that they care a lot more about the cheer than they do about us … [Jordan] was always so appreciative of us and on the team plane flying home, he was so cordial with all of us. He was just a great guy and he’s going to be missed in that respect.”

Jenna Moore, senior strategic communications major, member of dance team: “[Jordan] definitely appreciated us more than other people in athletics. After games or whenever we traveled, he would always come to talk to dance, cheer and band and thank us for being there — being kind of their hype crew. That always made us feel special. Because, you know, the head coach of the basketball team doesn’t always do that.”

Were you expecting Jordan to be let go this off-season? What was your reaction when it happened?

Duncan Stone, junior strategic communications major: “Before the season, I would’ve said no … but during the season, I could just notice that I don’t think [Jordan] was working as well with the team. Like I don’t think we grew offensively or even defensively, we just kind of seem stagnant and not the team that we needed to be especially in modern college basketball.”

Kyle Klumpp, junior health sciences major: “I was kind of mixed. I thought during the season that he should be fired. But then after we fired the women’s coach, I didn’t think that we were going to fire him because I didn’t think Butler Athletics would want to pay two buyouts. So when they waited this long to fire him, I was like, ‘Yeah, they’re just gonna have him for one more year and then not re-sign him.’ But then the buyout went down on April 1, and they ended up firing him.”

Kai Bates-Diop, junior psychology major, men’s basketball senior manager: “I don’t know if I was expecting it. But I do know, I’ve been around college basketball a long time … it’s a business that, unfortunately, is defined by wins and losses, even though there is a whole other side of it that matters.”

KBD: “He’s definitely a positive role model and positive influence on players’ lives and managers’ lives. So at the end of the day, losing that level of everyday face-to-face contact with somebody like that is unfortunate.”

Sam Burchett, senior secondary education mathematics major: “I think as a person, coach [Jordan] is great. And he established a really cool culture — he will be sorely missed.”

What did you know about Thad Matta prior to him being hired as Butler’s head coach?

DS: “[Matta] was able to get some pretty outstanding players at Ohio State. I mean, he had [Greg] Oden, he had [Mike] Conley, he had D’Angelo Russell and some other great players.”

KK: “I’m from Columbus, Ohio, so I grew up watching Butler and Ohio State. So for my whole life, I’ve been watching Thad Matta coach.”

KBD: “I actually know him very well. And I know their family very well … he used to coach my brother years ago [and he] played here. So I think it’s good that they’re getting somebody who’s from the Butler community and didn’t do an outside hire, which I respect.”

What do you think Matta can bring to the program?

DS: “I think Butler needs to be able to recruit the right kids. And I think the guy like Thad Matta knows how to get the kids he wants. [They don’t] have to be like the ‘Greg Oden, five-star recruit, becomes number one overall pick,’ we just need guys who are going to stay and play well and grow and develop.”

Alex Olsen, journalism and Spanish double major: “Unity. I’m hoping that [Matta] keeps that established and keeps the team like a family, but also brings in some good recruits that we can get for the upcoming year.”

JM: “I hope that Matta appreciates everybody that goes into game day and not just his team, because it’s really easy to overlook, dance, cheer and band and they add so much to Hinkle magic. And I think [Jordan] did a really good job at appreciating us in a way that made us want to keep people hype.”

What are some changes that you expect to see next season, on and off the court?

SB: I think the biggest position we need is an anchor in the middle … a good [6-foot-11-inch] or 7-footer that can get physical down low.

DS: “We need the coach to be not just focused on the team but everybody. Have the players do their best to be in the community, make a difference and stand for what they believe in.”

Where do you think Matta ranks among the rest of the Big East coaches?

DS: “I say he’s probably top half. I mean, I don’t want to give him top five … he hasn’t been coaching … but I think he’s gonna be a very good coach.”

KK: “I think top to bottom, the Big East might have the best coaches in the country … Thad Matta is very close to the top, if not right behind Jay Wright in my opinion.”

Where do you think we will end the season next year in the Big East?

DS: “I’m gonna set them low … but I’ll say a six or seven seed [in the Big East Tournament], pull out a couple of surprises and maybe have a couple ranked wins.”

KK: “I think it’s really hard to say right now with all the uncertainty … but I think that [Matta] can come in and make an immediate impact. I would be very, very happy if we were like, top five in the Big East next year. That’d be like a very lofty goal.”