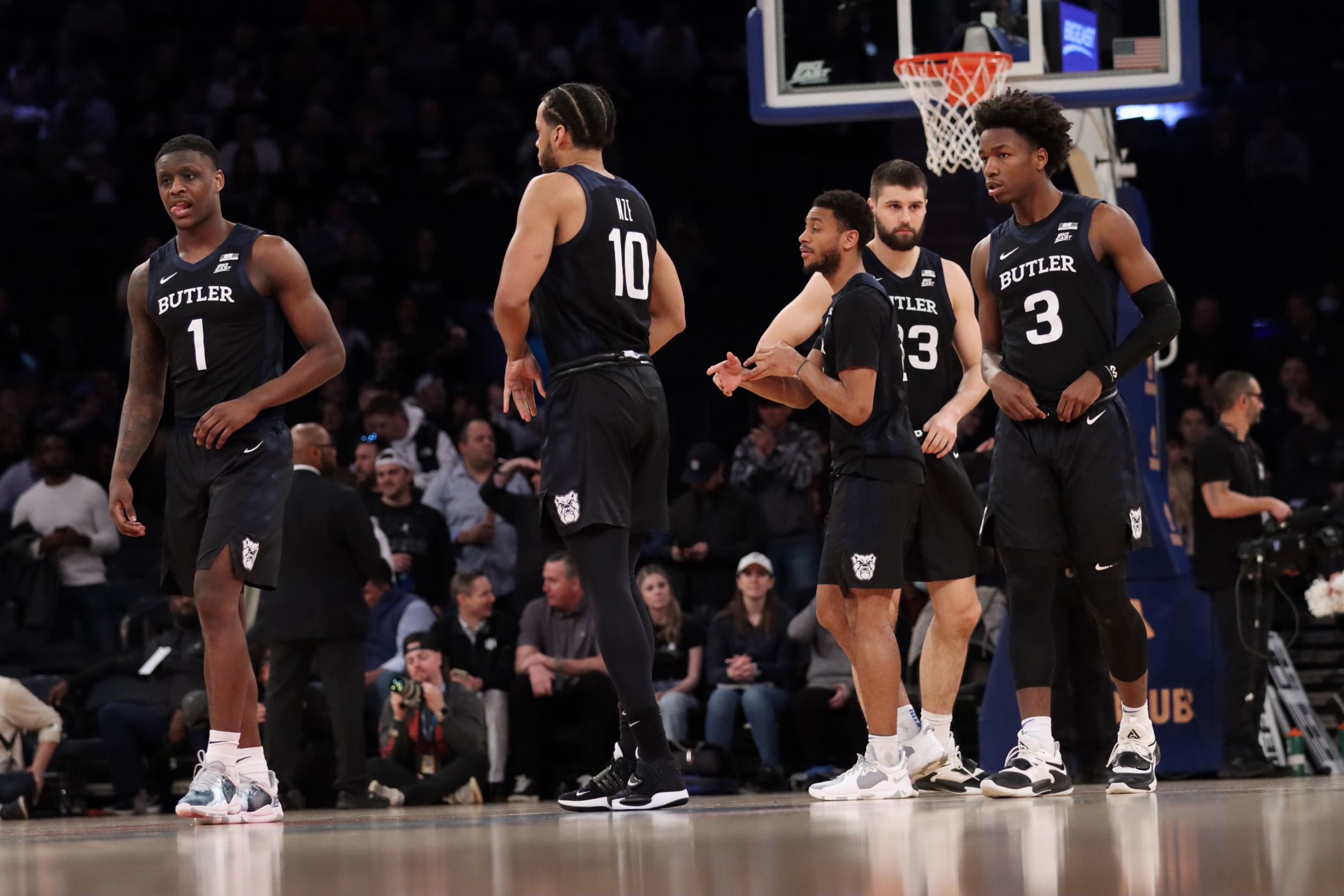 From left to right, Butler’s starters Bo Hodges, Bryce Nze, Aaron Thompson, Bryce Golden and Chuck Harris stand on the floor at Madison Square Garden ahead of their matchup with Providence on March 10. Butler lost the game 65-61 as their 2021-22 season came to a close. Photo by Francie Wilson.

The Butler men’s basketball team lost to No. 11 Providence 65-61 and were eliminated in the quarterfinals of the Big East Tournament. The Bulldogs end the season with a 14-19 record, the second straight season finishing five games under .500. Providence, the conference’s No. 1 seed, will play Creighton tomorrow evening for a place in the final.

Nate Watson led the way for the Friars, scoring 26 points and grabbing seven rebounds. Chuck Harris had 14 points for Butler, Bryce Golden added 13 and Bo Hodges had 10 points and a career-high 15 rebounds. This was the final collegiate game for seven Bulldogs — Hodges, Aaron Thompson, Bryce Nze and Ty Groce, as well as Christian David, Jair Bolden and Mike Parker who did not play today.

In many ways, this was a heartbreaking loss for the Bulldogs. Butler led for over half the game and held a 59-56 lead with a minute and a half to play. But that is when Providence took over.

With 80 seconds remaining, Watson forced his way into the paint and scored a floater through a foul, but missed his free throw which let Butler hold onto a one-point lead. On the ensuing possession, Justin Minaya blocked a Harris layup that would have brought the lead back up to three, and Aljami Durham hit a 3-pointer on the other end to give Providence a two-point lead with 41 seconds left, their first lead since the 13-minute mark.

After a timeout, Simas Lukosius had his layup blocked — again by Minaya — but Hodges secured an offensive rebound. Hodges reset the offense and then drove to the lane and attempted a layup of his own, but it did not fall. Jared Bynum secured the rebound and hit two clutch free throws. Immediately, Hodges pushed the ball up the court and scored a layup, making it a 63-61 game with seven seconds left. The ball came loose on the in-bounds play and Butler got out of position trying to jump on the ball. Bynum came up with it and threw it across the court and Durham dunked the ball as time expired.

It was a game that Butler could have won, but that fact alone is a testament to the team’s character. On paper, Butler had no business competing with the 11th-best team in the country on 18 hours of rest, but the Bulldogs made the game uber competitive despite everything going against them.

The first half was not dominated by either Providence or Butler, it was dominated by the referees. It was not a one-sided affair with only one team getting calls, but the refs called nearly anything resembling a foul in the first half. A total of 26 fouls were called in the first 20 minutes, with 15 on Butler and 11 on Providence. The game became a free throw shooting contest, which played into the Friars’ favor. Providence hit 13-18 attempts from the line in the first half, while Butler struggled, shooting just 9-17.

The number of calls led both teams into serious foul trouble. At half, Bo Hodges, Jayden Taylor and Jared Bynum each had three fouls and an additional seven players had two. Aaron Thompson only played eight minutes in the first half because of two early fouls, and the aggressive defense he employs would have very likely resulted in a third if he continued to play his normal minutes.

While this style of game the referees called hurt the Bulldogs in some respects — foul trouble and the team’s season-long struggles at the free throw line — it helped Butler in some ways too. The sheer number of fouls slowed the game down significantly and forced both teams into a solely half-court game. This style played right into Butler’s play-style on both sides of the ball, and hurt Providence who is not as comfortable breaking down a half-court defense.

Thankfully, this first half officiating did not end up playing as big of a role as it seemed it would. The first half ended with the teams tied at 31 and not a single player fouled out, which feels like a miracle with the direction the game was going. The refs were much less whistle-happy in the second half and both coaches likely made adjustments after realizing how the game was being officiated.

It would not be fair to blame the refs for Butler losing, because ultimately the Bulldogs had opportunities to win the game and were unable to deliver. Butler shot just 36% from the field and had their second-worst 3-point shooting performance of the season, hitting just 3-19 attempts from deep. The Bulldogs also missed nine of 23 free throws, which is simply too many points to leave on the board against a team like Providence.

Butler’s defense held Providence to similar percentages across the board and outrebounded the much bigger Friars. The Bulldogs’ defense did their part, but as has been the case so many times this season, the offense was unable to deliver when it mattered most.

The end of an era

As seven seniors and super seniors move on from the program, the Butler men’s basketball team will look much different next season. Three perennial starters — Thompson, Hodges and Nze — will all be gone, in addition to key role players like Bolden, Groce and David. Golden has already stated he is coming back for one more season, but at this point he is the only guarantee.

With the transfer portal being more utilized than ever and Butler seemingly in a transition period, Harris, Lukosius, Tate and Taylor all will have bidders looking to pluck them out of Indianapolis. There have been no indications that any would leave Butler, but there is always the chance they could move on.

Butler themselves will need to dip into the transfer portal. Butler currently only has one high school commit — 6-foot-10-inch Connor Turnbull out of Missouri — but still has six other roster spots that need filled. More high school commits will likely come, but Butler will need to look to other colleges to fill the shoes of the seven seniors leaving the program.

The big question remaining though is the fate of head coach LaVall Jordan. After back-to-back losing seasons, some fans have called for the program to move on from the Butler alum. With one year remaining on his contract, it seems unlikely that Jordan will be fired, but it is a possibility.

After the game, five-year starter Aaron Thompson reflected on his time at Butler and explained where he sees the program going in the future.

“This place is special to me,” Thompson said. “It’s a place I can call home. I just remember all my teammates, everybody that’s helped me while I’ve been here. And I can’t, I can’t thank all those people enough that have helped me throughout my process at Butler … And for the future of the Bulldogs, this place is special. It’s been special. It will always be special. That won’t change no matter what’s going on, win, lose, it’s always going to be special … The players here are always going to have a fight to them. They’re going to come back and get up off the mat, win, lose, or draw.”