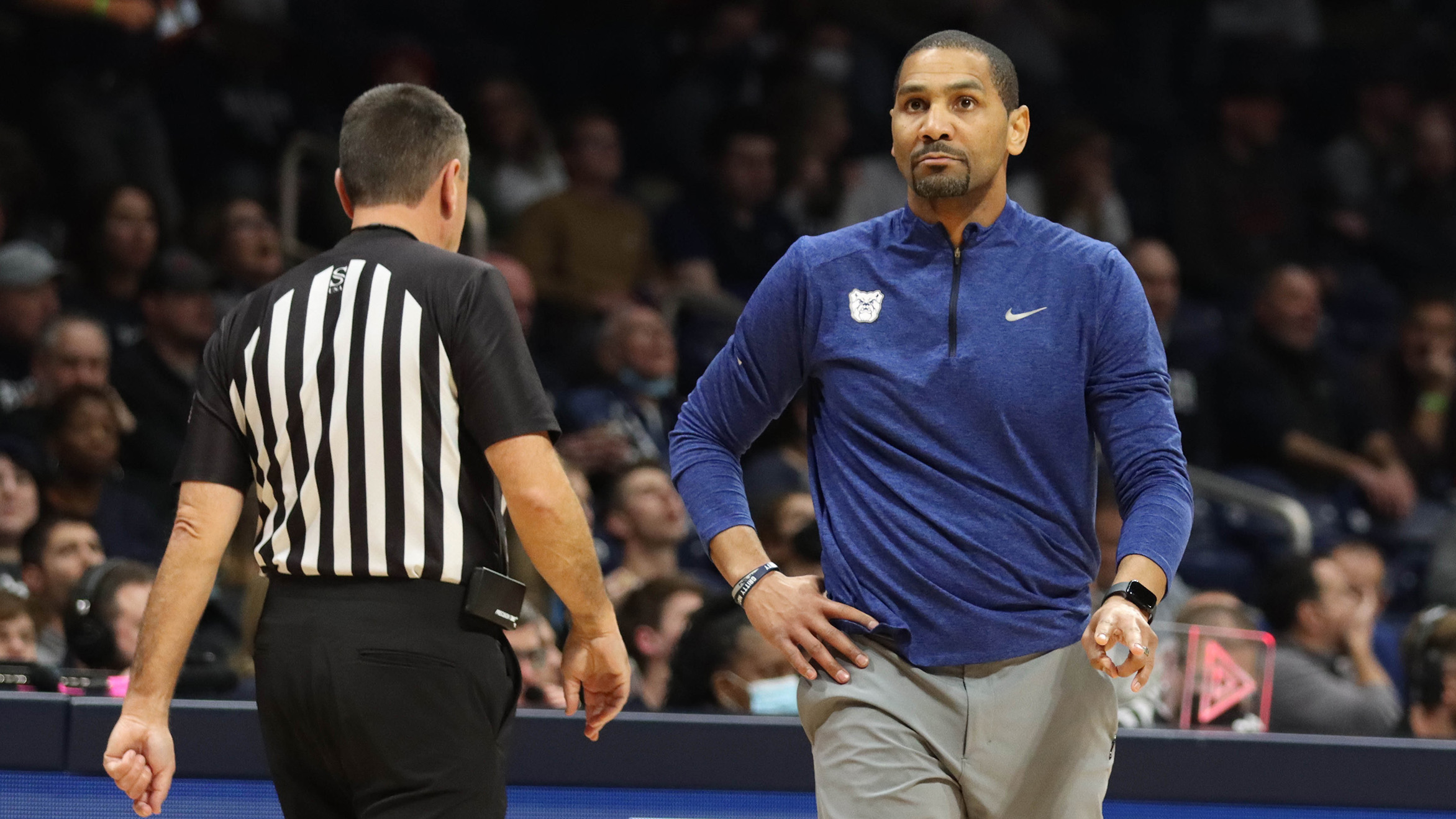 Former Butler head coach LaVall Jordan walks past a referee in Butler’s game versus UConn on Jan. 20. Jordan and the university have “parted ways” after a 14-19 finish in the 2021-22 season. Photo by Francie Wilson.

After five years at the helm of the Butler men’s basketball program, head coach LaVall Jordan and the university have “parted ways,” effective immediately. The announcement was made in a release from Associate Athletics Director/Communications John Dedman. According to the email, the search for a new head coach will begin immediately.

Jordan joined the program – his alma mater – in June 2017, becoming the first Black coach in the history of Butler men’s basketball. Jordan was the highest paid Butler employee, earning $1,553,419 in 2019.

Jordan had a successful start in his first season, leading the Bulldogs to a 21-14 overall record and a 2018 NCAA Tournament berth – the only appearance during his tenure.

The 2018-19 season was a down year for Butler standards, but the 2019-20 season was the best year under Jordan. Led by Kamar Baldwin and Sean McDermott, the Bulldogs went 22-9 in the regular season and were ranked as high as fifth in the AP poll – the highest a Butler team has ever been ranked during the regular season. However, the season was cut short due to the COVID-19 pandemic, and that Butler team never got the chance to play in the Big East Tournament or the NCAA Tournament.

This did Jordan no favors, as a deep tournament run could have built him up enough credibility to sustain his job through a few down seasons. Those down seasons did indeed come – 10-15 in the 2020-21 season and 14-19 in the 2021-22 season – and now Jordan is without a job.

In the release, Butler Vice President/Director of Athletics Barry Collier said that it was a difficult situation to part ways with Jordan.

“These decisions are never easy, but are incredibly more difficult when it impacts a high-character Bulldog who has represented our university so well for many years,” Collier said. “I want to thank LaVall for his dedication to our program, and we wish him and his family all the best moving forward.”

Butler waited much longer in this process than rival schools did. Xavier fired former head coach Travis Steele on March 16, just a week after the Musketeers loss to Butler in the Big East Tournament. Former Seton Hall head coach Kevin Willard resigned from his position on March 21 to take the lead job at Maryland. Both Seton Hall and Xavier have already replaced their departed coaches with high profile names.

Waiting, like Butler has done, puts the program out of the running for many good coaches that have already been hired, and hampers the next coach’s ability to make impact moves in the transfer portal, which Butler desperately needs. After Simas Lukosius joined Bryce Golden and Mike Parker in the transfer portal, Butler only has eight players for next season, including their lone high school recruit, Connor Turnbull.

For the Bulldogs to be competitive at all next season, the program must secure multiple impact players from the transfer portal. Waiting so long on the head coaching decision hinders the ability to do that. A possible reason for waiting until today is rumors that the language in Jordan’s buyout clause causes the money owed to Jordan to decrease significantly if fired after April 1.

Rumors of who Butler will hire to be the next head coach have already been swirling. Thad Matta, who played and coached at Butler before his success at Ohio State has been mentioned. Current Ohio University head coach Jeff Boals, a former assistant coach to Matta, has also been rumored. Pacers assistant coach and former Butler player Ronald Nored has been talked about as well.

Regardless of who the next coach is, this decision to part ways with Jordan will greatly affect the future of the Butler men’s basketball program. Chuck Harris, who shortly after the season ended tweeted out his intention to return to Butler, and Jayden Taylor do not appear to be happy about the decision from the Athletic Department.

The Butler Collegian will continue to report on the fallout from the decision to part ways with LaVall Jordan and the search for a new head coach.

This story was updated on April 1 at 1:52 p.m. after Jonathan Givony of Draft Express announced Simas Lukosius is entering the transfer portal.