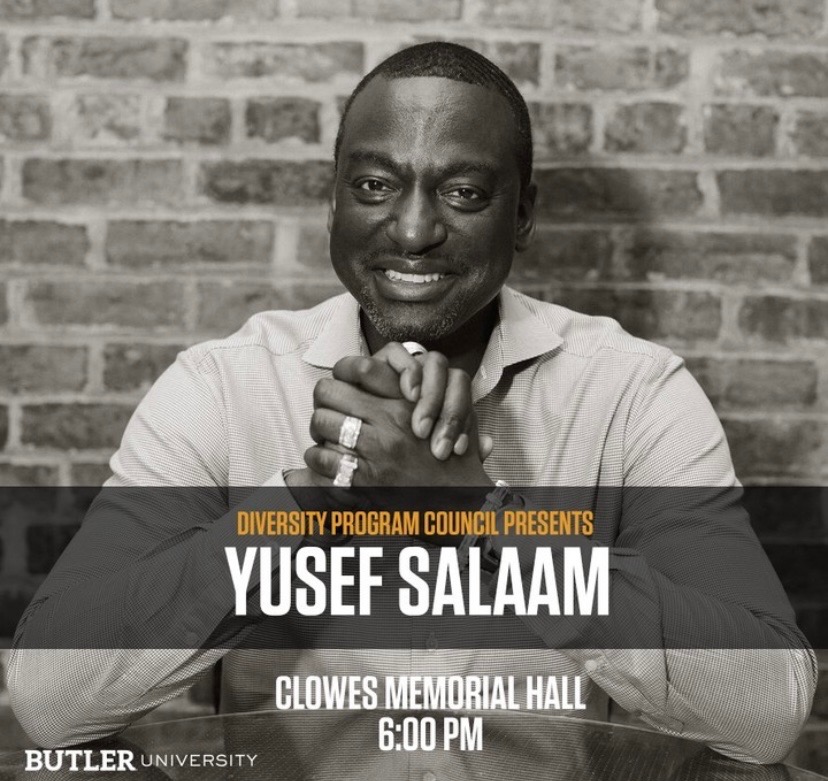 On Thursday, March 24, Butler’s Diversity Program Council sponsored an event with a member of the Central Park Five. Photo courtesy of @butlerartseventscenter on Instagram.

Yusef Salaam, an exonerated member of the Central Park Five, spoke at Clowes Hall Thursday, March 24 about his experience fighting for racial justice and the hope he has for the future. The event was sponsored by Butler’s Diversity Program Council.

Annie Ventura, a senior international studies major and president of the Diversity Program Council, said she had been planning the event since the fall semester. Ventura said she believed Butler students could benefit from hearing from someone who had experienced racial discrimination in the justice system at such a young age.

Acting as moderator, Ventura said during her interview with Salaam, she was struck by how much hope he has, despite the trauma he has gone through.

“He called what happened to him a ‘love story,’ and I was just really taken aback when he said that during the interview,” Ventura said. “I was like, this was such a horrible thing that happened, but when he framed it in that way, I thought it was interesting because … it’s a case that turned the system upside down. It helped us recognize some of the really bad issues with the justice system.”

In April 1989, when Salaam was 14, he and four other Black and Hispanic teenagers were arrested after a female jogger was found unconscious after being raped and beaten in Central Park. Although there was no physical evidence against them and their DNA did not match samples taken from the scene, later that year, the teenagers were charged with rape. Salaam spent nearly seven years in prison despite never having confessed to the crime.

When Sadia Khatri, a first-year healthcare and business major, saw that Salaam would be speaking on campus on Instagram, she was eager to attend.

“Hearing that Yusef Salaam was coming was very exciting considering he’s such a big figure for civil rights activism in the modern age,” Khatri said. “Knowing that one of the exonerated members of Central Park Five was going to be here was super exciting, because he’s someone I really look up to, and the work that he’s done has been so valuable in society. So to hear from him was amazing.”

Since his release in 1997, Salaam has become a motivational speaker and advocate for criminal justice reform. His story was featured alongside the other members of the Central Park Five in Ava Duvernay’s award winning show When They See Us. Salaam has also written a number of books about his experience. He signed copies of his latest book, Better, Not Bitter: Living on Purpose in the Pursuit of Racial Justice, after the event.

First-year entrepreneurship and innovation major Alexis Crawford was not familiar with Salaam’s story before seeing him speak.

“I didn’t know anything about his story really, so I feel like I learned a lot,” Crawford said. “The whole thing is really messed up, and it’s crazy to see that he’s still so grateful and hopeful about it.”

Khatri also said Salaam’s outlook on his experience was encouraging.

“I was so inspired, I was in awe,” Khatri said. “Hearing someone that eloquent and powerful speak was just like, I have a lack of words.”