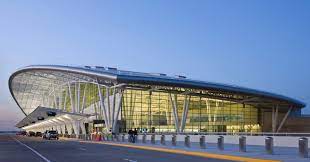 Students returning home from spring break were unable to use SGA Uber funds to travel from the Indianapolis airport back to Butler’s campus due to exceeding a spending cap. Photo courtesy of hok.com.

Butler’s first normal spring break in two years brought an influx of students traveling to and from the Indianapolis International airport. Many of those students utilized the Student Government Association’s partnership with Uber to pay for their ride. However, due to a reached spending cap established by the Uber company, some students were surprised when they found they could not charge their ride back to SGA and instead had to cover the cost themselves.

Will Gigerich, a senior criminology major and SGA president, said SGA received a message on Sunday, March 13 from a student informing them there was an issue. Brooke Hazel, a senior strategic communication major and director of public relations for SGA, said the issue occurred on Uber’s end.

“Uber has a set amount of money that the partnership allows to be paid in one day,” Hazel said. “Uber’s own limitations and the credit card it uses caused this problem to occur.”

Gigerich said the volume of students traveling over spring break caused the spending threshold to be reached. This is why students received an error message when they tried to charge the ride to the SGA business account.

An announcement was then made on SGA’s Instagram story Sunday stating the Uber program was not working and informing students how they could receive a reimbursement.

“We chose to release information about the Uber program on our Instagram account because it was the most timely method through which to communicate with students,” Gigerich said. “Due to limitations in Outlook, we cannot send a mass email without individually adding student email addresses.”

Gigerich said $45,000 has been allotted for student transportation services, which as of now is only used by the Uber partnership. He said Uber sets a spending cap for their partners that only allows them to carry a balance of $15,000.

SGA was aware of the spending cap prior to this problem occurring, however, Gigerich said there was not a concern as SGA never came close to reaching this cap.

Senior dance pedagogy major Sarah Stahovich said SGA’s Uber service worked smoothly leaving for spring break but trying to get back to campus was a problem.

“I tried to order an Uber to Butler and the app gave me a message saying that the Butler SGA payment option could not go through,” Stahovich said. “I was confused as to why this payment option was not available to me as I have never had a problem with this service before.”

Unable to utilize SGA’s program, Stahovich had to order and pay for an Uber through her personal account. She emailed SGA about the problem, and they quickly responded apologizing for the inconvenience and told her how she could get reimbursed for her trip.

Stahovich said despite the problem over the weekend, booking an Uber and charging it to SGA is usually very easy and it’s a service she has appreciated being able to use.

Students who were not able to charge their ride to SGA on March 13 can bring their receipt to the Office of Student Activities in Atherton Union, Room 101 to request a reimbursement for their ride.

If students experience an issue in the future, they can email SGA at sga@butler.edu.