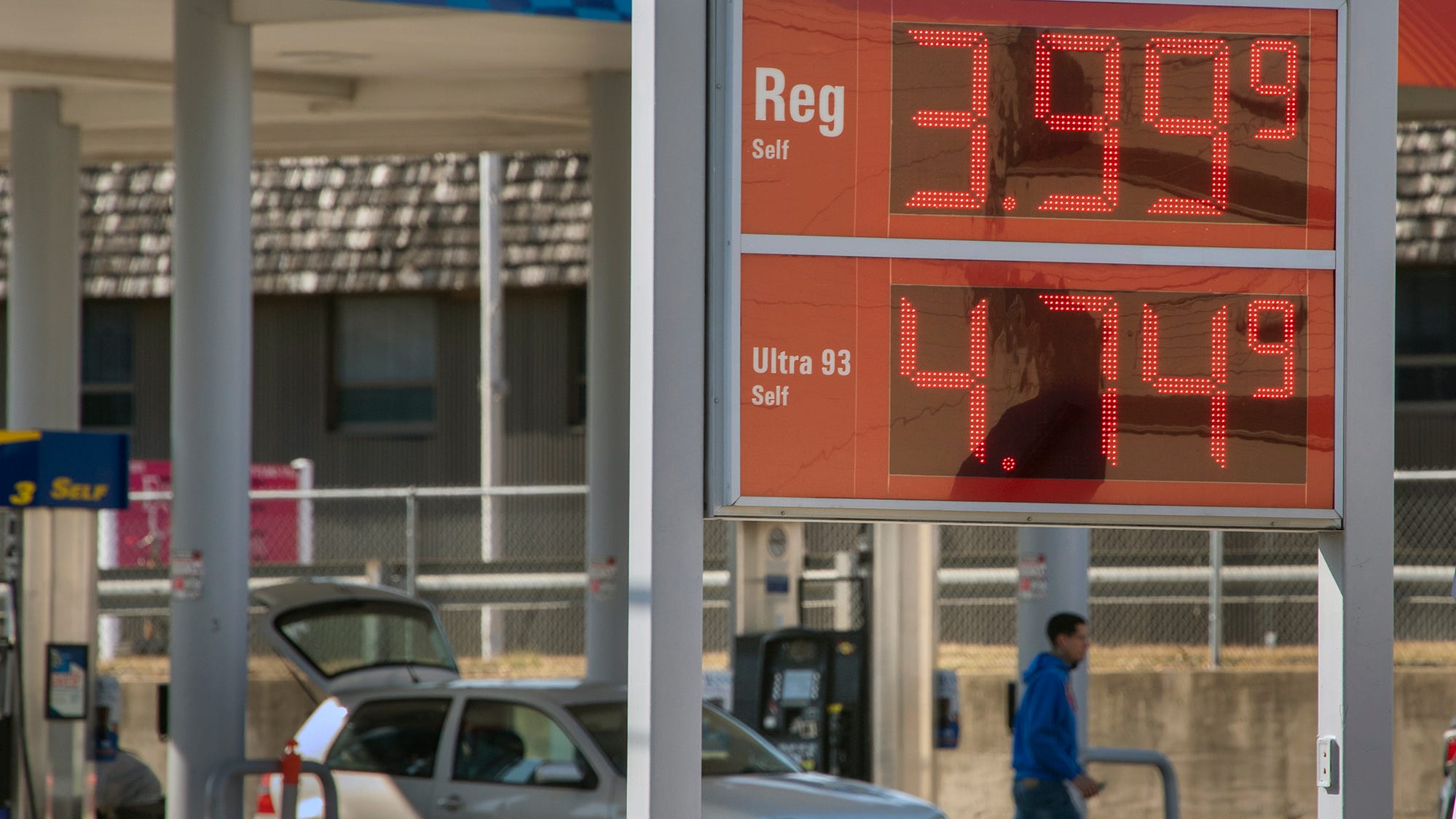 It’s beginning to feel like COVID-19 is trending downward, and the world is slowly opening back up. Since people first started receiving vaccinations in January 2021, the United States has been recovering and inching towards life as we knew it before the pandemic. Though different variants of the virus have hindered this process, we’ve still been able to lift many of the mask mandates across the country and at Butler University.

For about six months in 2020, during the first COVID-19 lockdown, those who were able remained in their houses for their own safety and for that of others. During this time, the popularity of online shopping grew exponentially. This was the safest and most convenient way for people to purchase the food they needed or the clothing they desired. Given that most people were not leaving the comfort of their homes, gasoline was in very low demand and prices quickly began to fall. Empty roads and very little gas usage lowered the average price per gallon to $1.94 in April, the lowest since 2008.

Since then, gas prices have steadily been on the rise, as each month more and more people are leaving their houses and starting to travel more. Gas consumption in the United States is beginning to increase again following the pandemic. 2021 saw slightly less gasoline consumption than 2018, a year in which the record was set for the highest amount purchased by citizens in a year.

Gas prices have recently risen uncontrollably and out of proportion with the steady trend they were on. What is really behind these record-setting numbers at gas stations across the country? Is there a fix in the near future? It’s a little complicated, but I’ll do my best to explain.

Over the past month or so, many Americans have been in disbelief at the amount they spend to fill up their cars. Watching the price steadily climb as gas flows into our cars is a gut-wrenching experience for most people on a college budget.

Cooper Roth, a first-year business exploratory major, offered some insight on his personal experiences filling up his car with gas in March 2022.

“It’s just kind of frustrating to see the number go up,” Roth said. “Last summer I could fill up my tank for about 30 [dollars] and now it’s 50 or more. It’s definitely annoying.”

Roth, like many others, cited the war in Ukraine as a main reason for gas prices being so high.

“I assume that a big part of it is the Ukraine and Russian war,” Roth said. “Russia supplies a lot of our oil and gas and so now that we aren’t getting that from them, it’s causing issues.”

This theory does explain a portion of why gas prices have risen lately. President Biden recently banned all imports of gasoline and oil from Russia, causing a temporary shortage in US supply. However, they only provided us with 21% of our total supply of gas, and oil is even lower at 5%. Most of our oil comes from our neighboring countries of Canada and Mexico, and gasoline from countries overseas. So yes, while this war does indeed have a large effect on our gas prices, it seems like there may be more to it, and it’s difficult to pinpoint exactly how the Russian invasion of Ukraine — as well as COVID-19 — play a role in the increasing gas prices.

Molly Morrissey, a first-year Chinese major, is another frustrated U.S. gasoline customer who  explained how she feels about this tough situation. As an out-of-state student, Morrissey was especially impacted by expensive gasoline on her nine-hour drive back to Nebraska.

“It’s really just disappointing,” Morrissey said. “On my drive back to Nebraska for [spring] break it was like $4 and usually it’s $3. It’s just annoying to see.”

Last August, when Morrissey first drove from Nebraska to Indianapolis, the U.S. average price per gallon of gas was about $3.23. Last week, it was recorded at $4.23, exactly a dollar more. Morrissey drives a 2013 Toyota Corolla that gets about 30 miles per gallon. Last August, she would have paid about $43 each time she filled up her tank, compared to about $56 last week. If she were to fuel up four times — twice each way — she is spending $52 more in total than she would have last fall on a round-trip. This extra money could have bought her a whole tank of gas and a handful of snacks from the convenience store back in August. Morrissey took a different perspective from Roth when analyzing the root cause of the current high prices.

“It’s definitely COVID-19,” Morrisey said. “It kind of reminds me of the toilet paper situation when everyone thought toilet paper was going to run out. So I guess people are thinking that with the war right now, the oil supply will decrease so it’s in high demand right now.”

I personally would attribute this situation to a combination of these two things: the war in Ukraine and the decreasing effects of COVID-19. The bottom line is that with people beginning to drive more frequently, gasoline is currently in much higher demand. Additionally, the war in Ukraine and the subsequent ban of Russian gas and oil has put the supply and demand out of balance. Ideally, we want to be as close as possible to the perfect supply of gasoline to meet the national demand.

While gas prices are draining wallets across the country, there might be a brighter, more eco-friendly solution: electric vehicles. If more people were to make this change, our carbon emissions would decrease and the environment would benefit. While buying an electric car would not be any kind of immediate fix, enduring the fluctuating gas prices now may encourage Americans to buy electric in the future to reduce this volatility.

Duane Leatherman, an associate professor of mathematics at Butler University, explained what he feels the future of electric cars will look like.

“I think the electric car is already here and becoming more and more popular,” Leatherman said. “This will just speed it up.”

Many Americans’ concern with purchasing an electric car is the price, so we must also look at both sides of the situation.

“The price of an electric car is still quite high,” Leatherman said. “But I think people may weigh the difference between what they’re putting in in gas against the cost of that electric car. So I think it’s gonna be a boom for the electric car [industry].”

Leatherman acknowledges that driving an electric car is not always the more affordable option. Calculations show that while it is cheaper in the short term to charge a small electric vehicle, the depreciation rate on these EV’s is much quicker than their gas-powered counterparts.

However, despite the initial financial burden, the global effect of an electric future is something that can not be overlooked. While many people may have initially rejected this idea, it may seem that transitioning to electric power is in our best interest as a society, particularly for those who are financially capable of a rather expensive change.

The story behind the numbers we see at the gas pump goes well beyond just one reason or one person. It is a global affair that likely will not be resolved for several months or possibly even years. The war in Ukraine and COVID-19 are world-wide issues that have a large effect on our daily lives. What began as a combination of NATO disagreements and oil feuds has caused a global ripple effect that has ultimately led to large numbers on our gas pumps.

For now, let’s first hope for an end to the Ukrainian war and a continued decline of COVID-19. I truly believe, however, that there are better days ahead with lower gas prices and likely more electric vehicles.

Especially as the weather is getting nicer, walking or biking as much as possible are free, easy and enjoyable ways to keep our air cleaner while also getting some exercise. We can also save some of our own money and reduce our carbon footprint by taking public transport when we are able. Though these things may not directly affect gas prices, they’re small environmental contributions we can make as a substitute for driving and spending more money.

As much as I wish I had the answers, there is no telling when the gas prices will fall or when these issues will be resolved. For now all we can do is make the changes we can to our daily transportation habits. Beyond that, we might just have to wait it out.