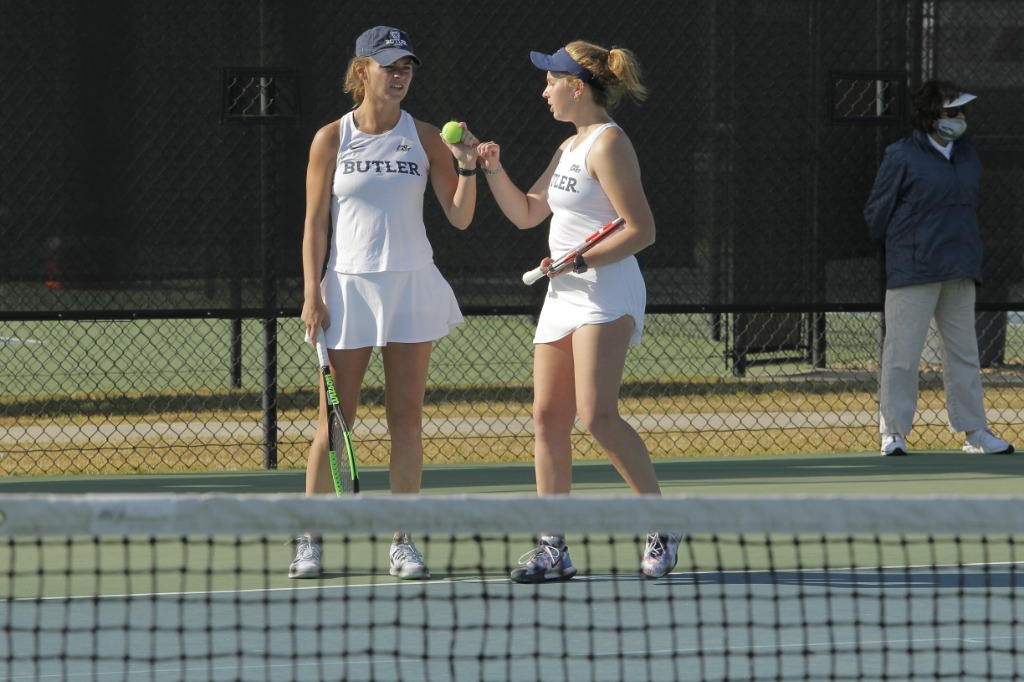 Sophomore Veronika Bruetting and graduate student Lauryn Padgett celebrate after scoring a point during one of their doubles matches last season. Photo courtesy of butlersports.com.

Despite the massive growth in popularity of female athletes and women’s athletics in recent years, the policing of women’s bodies in sports still exists. One of the ways that women’s sports have been oversexualized is through uniform requirements that are both outdated and gendered.

The history of unwanted uniforms for females athletes begins in the 19th century, when there were more opportunities for upper-middle class white women to engage in sports related activities —  such as lawn tennis — and their attire was ‘feminine,’ modest and designed to possibly attract a potential husband. They were dressed in rough corsets and full-length dresses — which surely constricted their physical abilities rather than enhanced them.

Last year, during the 2021 Summer Olympics in Tokyo, the Norwegian women’s beach handball team battled with the sport’s governing bodies to wear less-revealing uniforms. The team’s repeated complaints about their required elastic bikini bottom attire were ignored. To combat this, the players wore shorts during a game in protest — and were fined 150 euros per player.

According to the 2014-2021 International Handball Federation regulations, the required bottoms should be “a close fit and cut on an upward angle toward the top of the leg” and have a maximum side width of 10 centimeters.

Meanwhile, the men’s beach handball teams have always been permitted to wear shorts. Since the top jobs in sports are still dominated by men, many of the rules in place were created by men. However, women should be the ones setting the rules and designing uniforms in the sports they compete in.

After the protests of the Norwegian team, the IHF changed the rule book saying female beach handball players can now wear “body fit” tank tops and “short tight pants” as opposed to crop tops and bikini bottoms. The change was much needed and a relatively small but symbolic step for what the rest of the sporting world can do.

Here at Butler, the outdated uniforms of female athletes remain present in lacrosse, tennis and dance.

In women’s lacrosse, athletes are required to wear a skirt along with their jerseys in games. Although the skirt has spandex attached inside, there is still the chance of exposing more skin than many athletes would prefer.

Freshman lacrosse attacker Kayleigh Collerary has played lacrosse since she was 14 years old, and she has experienced moments of discomfort during games involving her uniform.

“There’s been photos of me taken by professional photographers, during sporting events where all you can see is my spandex and it is not very comfortable to look at,” Collerary said. “I also find myself [while] playing trying to adjust my uniform to cover my spandex.”

Similar to lacrosse, tennis also shares a similar uniform dress code that differs between the sexes. Tennis has a long history of fashion involved with the making of its uniform. The look was inspired by lawn dresses that were often worn to garden parties and many outdoor activities.

Studies have shown that during tennis tournaments, such as Wimbledon, women’s clothing is far more likely to become a topic of debate, but male clothing had not been brought up once.

In 2019, 23-time Grand Slam Title winner Serena Williams, received backlash from French officials when she chose to wear a short black bodysuit instead of a skirt.

At Butler, female tennis players’ uniforms consist of skirts and dresses, while the men’s team wears shorts just above their knees to their matches. While matches require a strict dress code for the women’s team, sophomore Veronika Bruetting often practices in shorts and a t-shirt. Bruetting believes that athletes should be provided a choice in what they wear during competitions.

“I think they could offer multiple options, especially to people who are non-bianary,” Bruetting said. “I know people in sports who struggle with that and would prefer to wear shorts and a t-shirt instead of tank tops and a skirt that are normally seen in tennis. I think schools and coaches should be more proactive about upgrading more options.”

In addition to lacrosse and tennis, there is much discussion about the uniforms for dancers as well.

Dance has a long history of sexualization through uniforms and competitions — especially with young girls. Sophomore dancer Ailayna Gaffney has participated in dance since she was 12 and she believes Butler’s dancers need more of a voice in the options.

“I think we would know first-hand what we would want to see changed and what we feel needs to be changed,” Gaffney said. “Making sure the options attend to each dancer’s individual needs as well as their body types.”

Although women’s sports will most likely continue to be sexualized, many female athletes are becoming more vocal about their opinions on what they should wear and how they presents their bodies.

Sporting officials are now also making an effort against sexualized or stereotypical representations of female athletes by updating their guidelines. The International Olympic Committee instructs broadcasters not to focus on make-up, hair, clothing or intimate body parts.

With less uniform regulations, maybe the media and audiences can focus on the athleticism of these female athletes instead. The sooner the women are deciding what makes them comfortable with their individual body type, the closer we will be to equality in the sporting world.