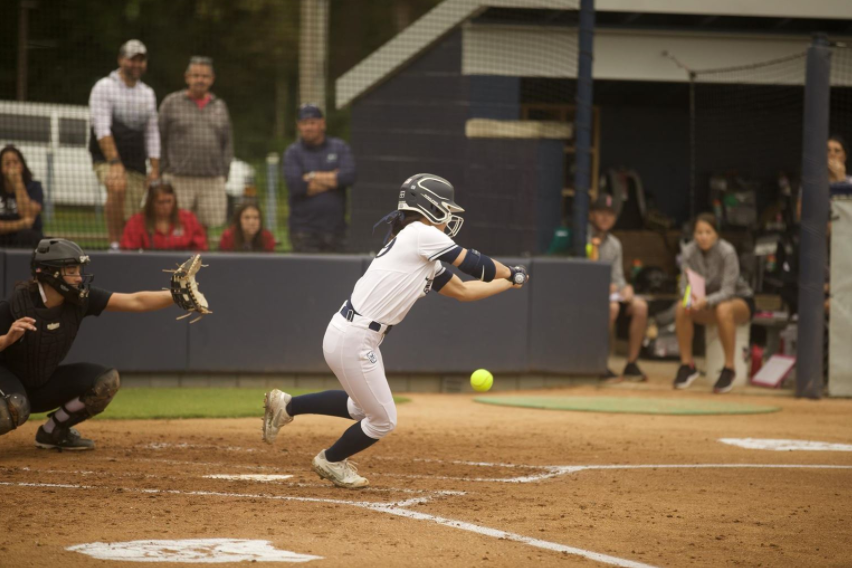 Freshman Ellie Boyer lays down the winning bunt for Butler against Seton Hall on March 25. Photo courtesy of Butlersports.com.

The Butler softball team took on the Seton Hall Pirates during the weekend, going 2-1 in those games.

Senior Karli Ricketts started the first game for the Bulldogs and took the loss. She allowed five hits and five runs along with two walks. She also struck out seven batters.

Seton Hall scored two in the first and two in the third to get off to an early 4-0 lead going into the fourth. In the fourth inning, sophomore Monique Hoosen scored the Bulldogs’ first run on a past ball, but the Pirates would then add three more in the fifth. In the bottom half of the fifth, graduate student Maddie Moore singled to allow freshman Ella White to cross the plate. The Bulldogs eventually lost 8-5.

In the second game of the day, Butler fell behind 0-1 in the first inning again, but scored two in the bottom half of the inning when White launched a home run and knocked in senior Lauren Fey as well. In the sixth inning, senior Gracie Voulgaris hit a solo home run to tie the score at three. In the bottom of the seventh, senior Bri Avery singled on a bunt and stole second. After advancing to third on a sacrifice bunt by Fey, Avery scored on a bunt from Boyer for the winning run.

Junior Mackenzie Griman started in the circle for the Bulldogs. She pitched four complete innings and was relieved by graduate student Alyssa Graves who picked up the win.

In the final match of the three-game series, Butler picked up the 4-1 victory over Seton Hall.

In the bottom of the first, the Bulldogs took a one-run lead when White hit a sacrifice fly to left field, which allowed Boyer to cross the plate. In the fourth, Boyer took a bases-loaded walk, which allowed Moore in for the second run. In the next inning, Hoosen hit a two-run home run that put the Bulldogs up 4-0.

Graves started for Butler and picked up her seventh win of the season. She pitched for 5.1 innings and allowed only two hits while striking out nine batters.

Butler will face off against the Dayton Flyers at home for a single game series on Wednesday, March 30 at 3 p.m.