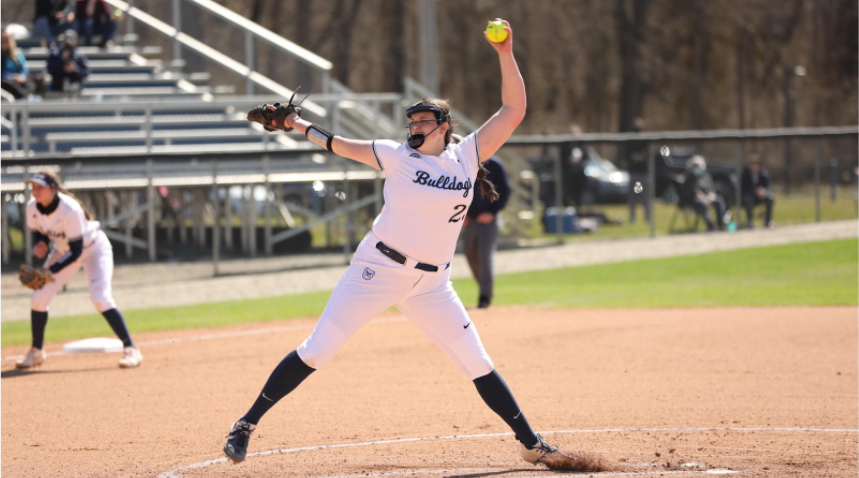 Graduate student Alyssa Graves winds up in the pitcher’s circle against Chattanooga on Feb. 26, 2022. Photo courtesy of butlersports.com.

The Butler softball team won its first two Big East games of the season over the weekend to make their current record 14-7. The team traveled to Villanova for a three-game series against the Wildcats.

Senior Karli Ricketts started the first game for the Bulldogs and earned the complete-game victory. She went for seven innings, allowed two hits, one run and one walk. She struck out eight batters and is now 8-1 on the season.

An error on Villanova’s side allowed sophomore Teagan O’Rilley to cross the plate in the third inning. The next batter, graduate student Maddie Moore, singled in Monique Hoosen to put Butler up 2-0. In the fifth inning, O’Rilley singled to knock in freshman Ella White, making the score 3-1. Senior Lauren Fey also added a pair of singles and a stolen base for the Bulldogs as they would go on to win the game 3-1.

In the second game of the day, Butler put up six runs and held Villanova scoreless. Graduate student Alyssa Graves threw a complete-game shutout and evened her record at 3-3. She allowed four hits and no walks while striking out six in seven innings.

In the top of the first inning, Fey singled and advanced to second. Junior Mackenzie Griman then singled to right field, allowing Fey to score on a play at the plate. With two outs in the fifth inning, Hoosen hit a double to knock Griman in to put the Bulldogs up 2-0. In the top of the sixth, freshman Ellie Boyer scorched a two-run single with the bases loaded and one out. Redshirt freshman Kaylee Gross and senior Bri Avery crossed the plate. White then hit a two-run double, knocking in Fey and Boyer. The four-run inning put Butler up 6-0, and the Dawgs would keep the six-run lead for the remainder of the game.

The third game of the series was canceled due to rainfall and cold weather.

The team will travel to Chicago on March 18 for another three-game series, this time against the DePaul Blue Demons.