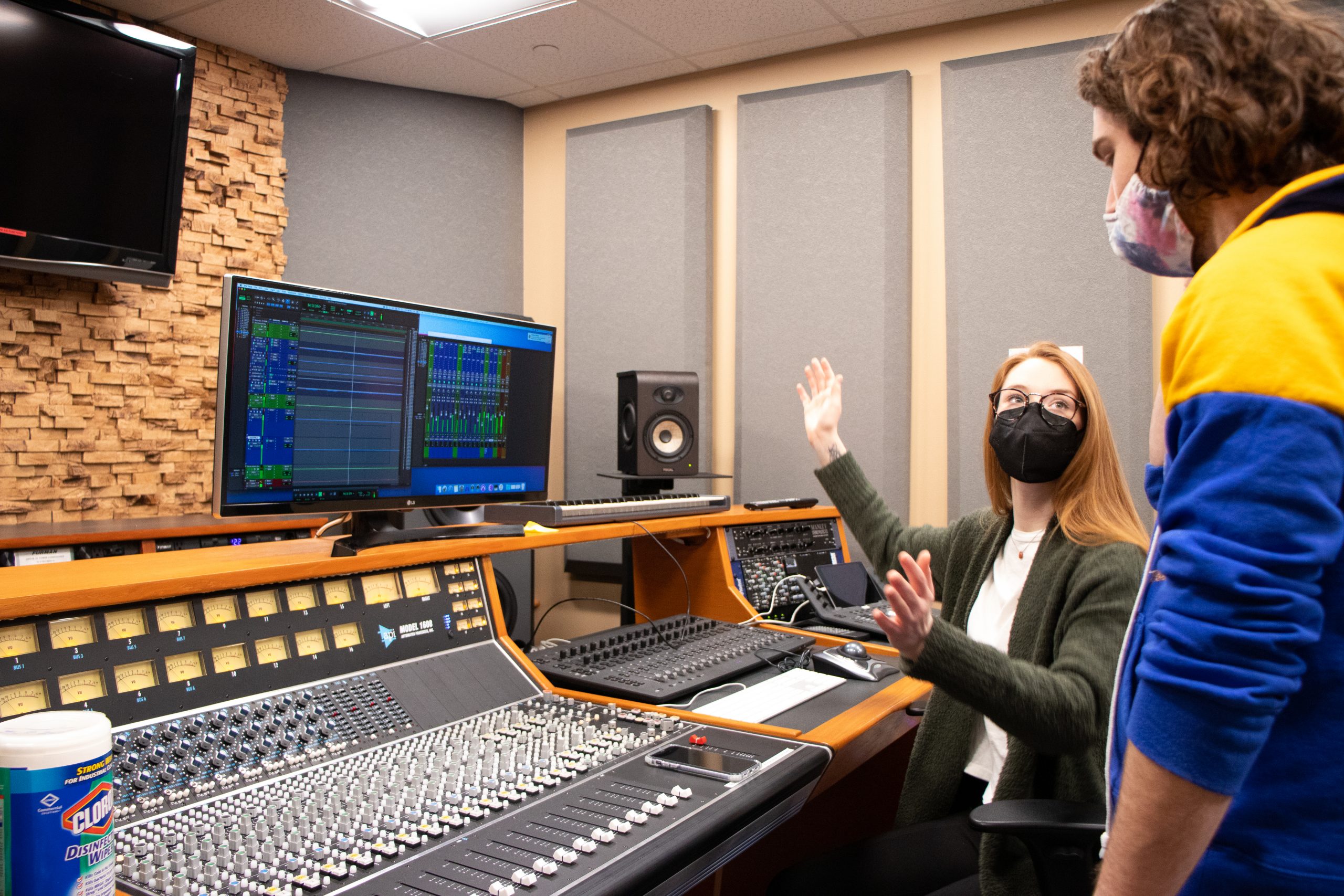 Student Emily Schaller shows off the sound board to another student. All of the equipment is used by Butler University’s record label Indy Blue Entertainment. Photo by Ben Caylor.

Disclaimer: Emily Schaller and Haley Morkert are Collegian staff members and therefore could not be interviewed as a conflict of interest.

Think of your favorite song. Consider, for a moment, all the work that went into its creation: the countless hours of writing, recording, producing and mixing. Would you believe that a group of students is professionally making and releasing music in this way right here on Butler’s campus?

Indy Blue Entertainment is Butler University’s very own record label and music publishing company. This past semester, student musicians and artists from the Indianapolis community used the recording studio in the basement of Fairbanks Center to create music to eventually be published under the Indy Blue label.

Cutler Armstrong, lecturer for the Eugene S. Pulliam School of Journalism and Creative Media, along with other faculty members, began Indy Blue around a decade ago as a way for students in the music industry studies program to release their recordings under Butler branding.

The label was used for different projects over the years but briefly fell dormant around 2017, before a group of students decided they wanted to revive it last year. Langford Lessenberry, a senior digital media production and music double major, discussed the thought process behind reviving the label.

“Emily Schaller, Haley Morkert and I were on the Butler in L.A. trip talking to another school that had their own record label, and we were a little jealous of that opportunity,” Lessenberry said. “We talked to [Armstrong], and he said we should get [Indy Blue] back up and running, so we got Griffin McPhail on board and the four of us kind of woke it up.”

The group took some time to get more people involved and designate tasks while Armstrong applied for and received a grant through the Music and Entertainment Industry Educators Association. Then, they got to work.

Schaller served as the sort of “CEO” of the label, making sure all the books were in order, while McPhail, a fifth-year music education major, coordinated with local artists. Lessenberry and Morkert served as the mixing engineer and recording engineer, respectively, and McPhail and Lessenberry also contributed their own performances. The group received help from many other students and faculty members in a number of capacities, including miking and general studio setup.

“I learned a lot more about what it takes to record high quality music,” McPhail said. “The Butler facilities are really high quality, and being able to work with that caliber of equipment was really great.”

The fruits of their collective labor is an upcoming sampler, which will feature four songs by four different artists and will be released officially via Indy Blue Entertainment. The Sunset Stilley’s, a local band featuring Butler student Garrett Phillips, contributed a song to the sampler, as did Butler graduates Kealy Welage and Gavin Zawacki. The track recorded by McPhail lands on the sampler as well, along with Lessenberry’s song that was recorded with collaborator Matthew Polson.

The songs were fully recorded and mixed here at Butler but will be sent off for mastering by Andy VanDette, a professional audio engineer whose credits include David Bowie and Whitney Houston, using the aforementioned grant money. Once mastering is complete, the sampler will be released digitally via streaming platforms. Additionally, the tracks will be sent off to Little Elephant Custom Vinyl in Toledo, Ohio — owned by Butler alum Rob Courtney — where physical records will be pressed as keepsakes for those involved in the recording process.

While this process may seem too daunting for someone who has never been in a studio, those involved said an abundance of experience or knowledge is not necessary to get involved with Indy Blue.

“I pretty much started mixing from the ground up,” Lessenberry said. “I was familiar with the ideas but not actually how to do it, and that was really the case for a lot of us. We just figured it out.”

Students interested in helping with Indy Blue can simply volunteer any sort of performance skills to a project, or they can sign up for a class called MI 357 Experiential Application. The class is a repeatable, pass-fail, three credit hour class that provides beneficial real-world experience.

Students do not need any advanced skills to enroll in MI 357, but those in the class who have no prior studio experience will need to take time to learn the ropes from older students before beginning their own work. Armstrong touts the course as a way for students to express their creativity and collaborate with like-minded peers while still getting upper-level university credit.

Besides the obvious technical skills learned from working in a professional studio, students said that their experience with Indy Blue has taught them many valuable lessons.

“Even if you’re not going to go into audio, it’s all interchangeable,” Lessenberry said. “Once you spend time with people who know what they’re doing, you’ll be better off for it, no matter what the discipline is.”

McPhail echoed this sentiment, adding that the hands-on aspect of the program was one of the most rewarding parts.

“I’m a music education major, and working with children is a different world entirely,” McPhail said. “It was just good to get hands-on experience with something that I wasn’t really familiar with.”

Although those most heavily involved with reviving Indy Blue will be graduating this year, they hope to keep the project going in the future via the mentoring of younger students. This semester, the group is bringing back those who helped during the recording sessions last semester and starting a sort of training program so that they’re able to take over next year.

Students like Lessenberry and McPhail are excited by this idea of keeping the label alive, even after their graduation. They appreciate the unique potential for continuous learning and innovation brought about by working closely with other dedicated students.

Armstrong would also love to see the release of new music under the Indy Blue label become a campus tradition that benefits the whole Butler community.

“I see lots of traditions at Butler that have been going on for 80 or 100 years,” Armstrong said. “It’d be great to see enough passion in students so that they continue this, and there becomes an expectation and excitement, like ‘Oh, there’s going to be some new stuff that we get to listen to.’ That’d be great.”

You can follow Indy Blue Entertainment on Instagram @indyblue.ent, and keep an ear open for the release of the label’s four-track sampler coming soon.