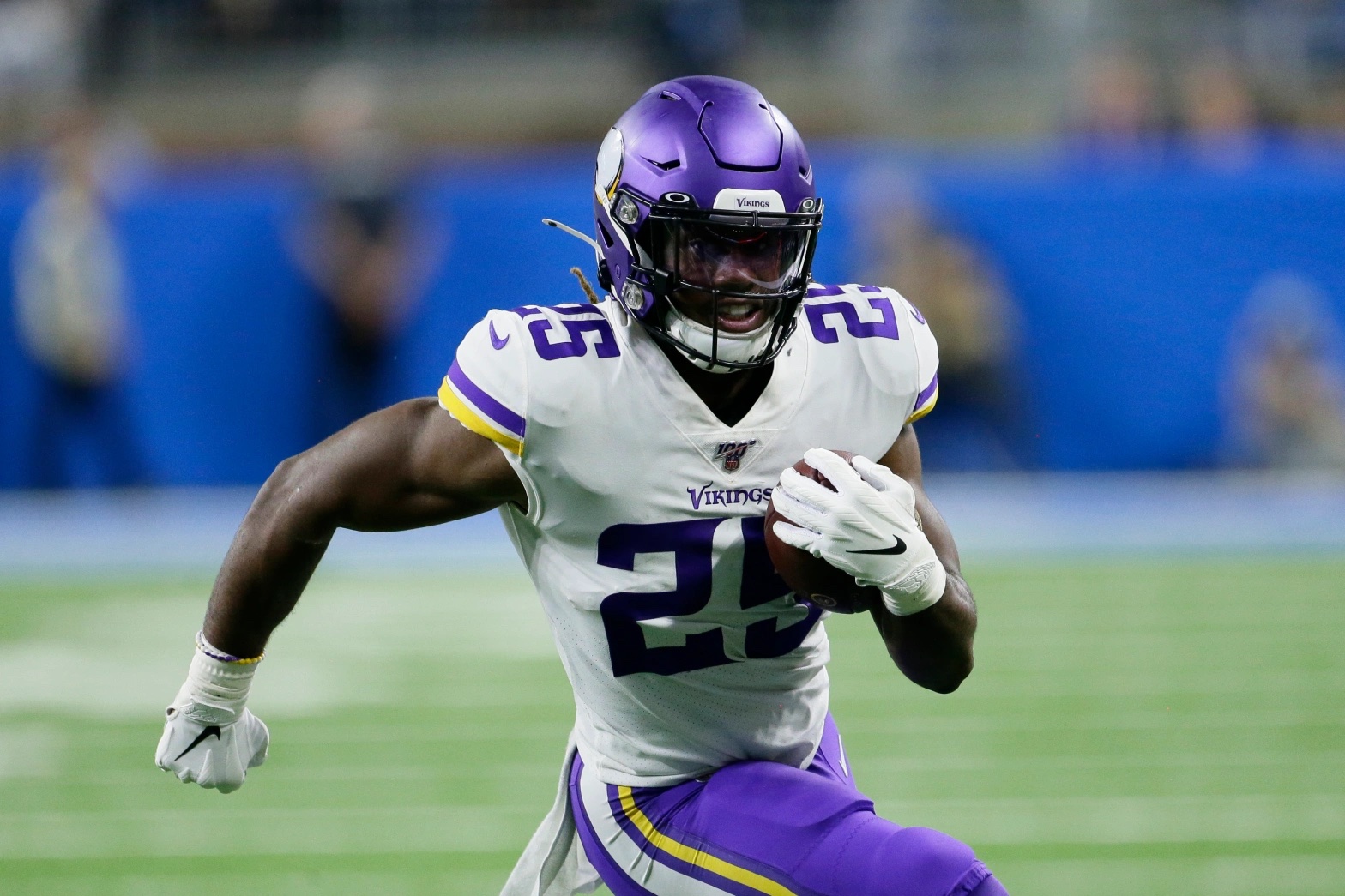 Minnesota Vikings running back Alexander Mattison rushes during the first half of an NFL football game against the Detroit Lions, on Oct. 20, 2019. Photo courtesy of Duane Burleson.

Someone needs to call the fire department because the NFL playoff race is heating up. With only six weeks left in the season, every game here on out is going to count. These crucial games can be for better in the Houston Texans’ case or for worse in the Cleveland Browns’ case.

For the majority of fantasy football leagues, the fantasy matchups are getting more intense with only two weeks away from the beginning of the playoffs. Finding last minute streaming options is a necessity as there are still some teams grasping at the hope of sneaking into the last spot.

Here are the key players to start and sit for Week 13 of the NFL season.

Matthew Stafford, Los Angeles Rams. When the Rams had a worse record than the Detroit Lions in the month of November, the red flag should begin to fly. Since the Rams acquired Von Miller to add to their arsenal on defense, the NFL thought this team would be unstoppable — yet they are now on a three game losing streak. However, Stafford and the Rams will have a shot to get back on track against lousy Jacksonville Jaguars defense. For fantasy managers holding out hope for Stafford, they should be able to take a breath of relief this week in a favorable matchup.

Joe Burrow, Cincinnati Bengals. Joey Franchise is the king of the Queen City. After tearing his ACL in his rookie season, Burrow has returned with a vengeance, leading the Bengal to a record of 7-4 in a stacked AFC North conference. Burrow even helped drop 41 points last week on their division rival Pittsburgh Steelers. Unfortunately, the Bengals will face one of the tougher defenses this week in the Los Angeles Chargers — who rank second in least passing yards allowed per game. Burrow’s got a bright future, but fantasy managers should be cautious for a surprise bust.

Alexander Mattison, Minnesota Vikings. The top waiver wire pick up goes to Minnesota, the new face of the backfield in Mattison. After star running back Dalvin Cook left last week’s game with a dislocated shoulder, the Vikings will be forced to turn to Mattison to fill the void. The Vikings running back should not be taken for granted as in two of his last three games he was listed as the starter, Mattison went for over 100 yards. This week, he will have the chance to feast on a Detroit Lions rushing defense that has allowed the fourth most rushing yards per game in the league. Mattison needs to be in the starting lineup of every fantasy football league across the nation.

Alex Collins, Seattle Seahawks. On the other hand, Collins has been very underwhelming for the Seahawks. Since stepping in to replace Chris Carson — who suffered another setback in his return to the field — Collins has struggled to get anything going. In his last six appearances, Collins has only surpassed the 100 rushing yard mark once. As someone who isn’t involved in the pass game, Collins is forced to rely solely on the ground game. The Seahawks are already in a dark hole and will have a tougher time getting out of it against a San Francisco 49ers defense that just held the Vikings running back duo to just 60 total rushing yards. Until the Seahawks figure out their offensive woes, Collins is not worth a spot on the starting lineup.

Marquise Brown, Baltimore Ravens. What a disaster of a game! The Ravens quarterback Lamar Jackson was the first quarterback to throw four interceptions in a game and still win since 2013. Brown still found a way to stay involved in the offense, leading the team in receptions with eight for 51 yards. Despite the dud on offense, the Ravens should be able to refocus in an favorable matchup against the Pittsburgh Steelers defense that just got torched by the Bengals. Brown is a reliable option at the wide receiver position in another important week of fantasy football.

Jakobi Meyers, New England Patriots. It only took three years, but Meyers finally recorded his first career receiving touchdown. This is just another accomplishment to add to Bill Belichick’s amazing season so far especially since the Patriots are still the hottest team in football. They currently hold a six game winning streak and will be hungry for more this week. However, they will have to get through the Buffalo Bills defense that has allowed second least points per game in the league. In the battle for the top of the AFC East, Meyers and the Patriots might have a harder time moving the ball downfield in front of the mighty Bills Mafia.

Foster Moreau, Las Vegas Raiders. You can never count out “Da Raiders”. Las Vegas traveled to Dallas last week and pulled off another huge upset to keep their season alive. In such a tight race for the top spot in the AFC West where every team holds a winning record, the Raiders still have their eyes on the prize. They will be without star tight end Darren Waller, leading to Moreau having to step it up big time. However, he shouldn’t have to worry as they will be facing the Washington Football Team’s secondary that has allowed the third most receiving yards in the league. Moreau is a solid streaming option for fantasy managers looking for an emergency replacement.

Zach Ertz, Arizona Cardinals. Since being freed from the confines of Philadelphia, Ertz has excelled with the Cardinals offense. In his last game against the Seahawks, Ertz caught a season-high eight receptions for 88 yards and two touchdowns. Fresh off a bye week, most would believe the expectations for Ertz would be the same, except the Cardinals will be forced to travel to the Windy City to play the Chicago Bears. Be careful with starting Ertz as he is likely to fail to produce the same stat line he did two weeks ago.

Harrison Butker, Kansas City Chiefs. It is safe to say that this season has not gone according to the Chiefs plan. Still, they find themselves atop a crowded AFC West division with the rest of the teams waiting to snatch the division leading crown. The destiny is left to their own devices as the Chiefs will look to continue to hold their position this week against the Denver Broncos. While the Broncos have allowed the third least points per game in the league, Kansas City is coming off a one-week break. The offense has had plenty of time to rest leading to Butker finding a chance at more opportunities to score big this week.

Ka’imi Fairbairn, Houston Texans. Congratulations to the Texans on winning the 2021 “Tank Bowl”. In a crucial game against the New York Jets, the Texans were destroying the Jets in every aspect until they realized the draft pick was more important. The Texans would go on to let the Jets come back and score 18 points unanswered. The problem with Houston looking to lose games is that the offense will continue to drop in production. Since the Texans care more about preserving the high draft pick, Fairbairn will begin being used less and less as they look to “unintentionally” lose games.

Miami Dolphins Defense. The revival of the 2020 no-name Dolphins Defense is back in South Beach. After losing seven straight games, the Dolphins defense has suddenly started clicking. Last week, the Fins forced three interceptions, blocked a punt for a touchdown and held Cam Newton to a 5.8 quarterback rating. This week, Miami will be blessed with another favorable matchup against the New York Giants, who will be starting Mike Glennon at quarterback due to an injury to Daniel Jones. Everything points in the direction of the Dolphins defense feasting against a weak Giants offense once again.

New York Jets Defense. No matter what week it is, you can always count on the Jets to single handedly make their fans suffer. The Gang Green have found a way to win another meaningless game late in the season to screw their draft pick. Who is to blame for this unacceptable performance? The Jets defense. While it is great to see the Jets defense making strides, it is far too late in the season to help them in any way. This week, the Jets will face the Philadelphia Eagles, who they have never beaten once in their entire franchise’s history. Will this be the year the Jets pull it off? The odds will be against them, and will be even more against any desperate fantasy football managers willing to take a chance on them.