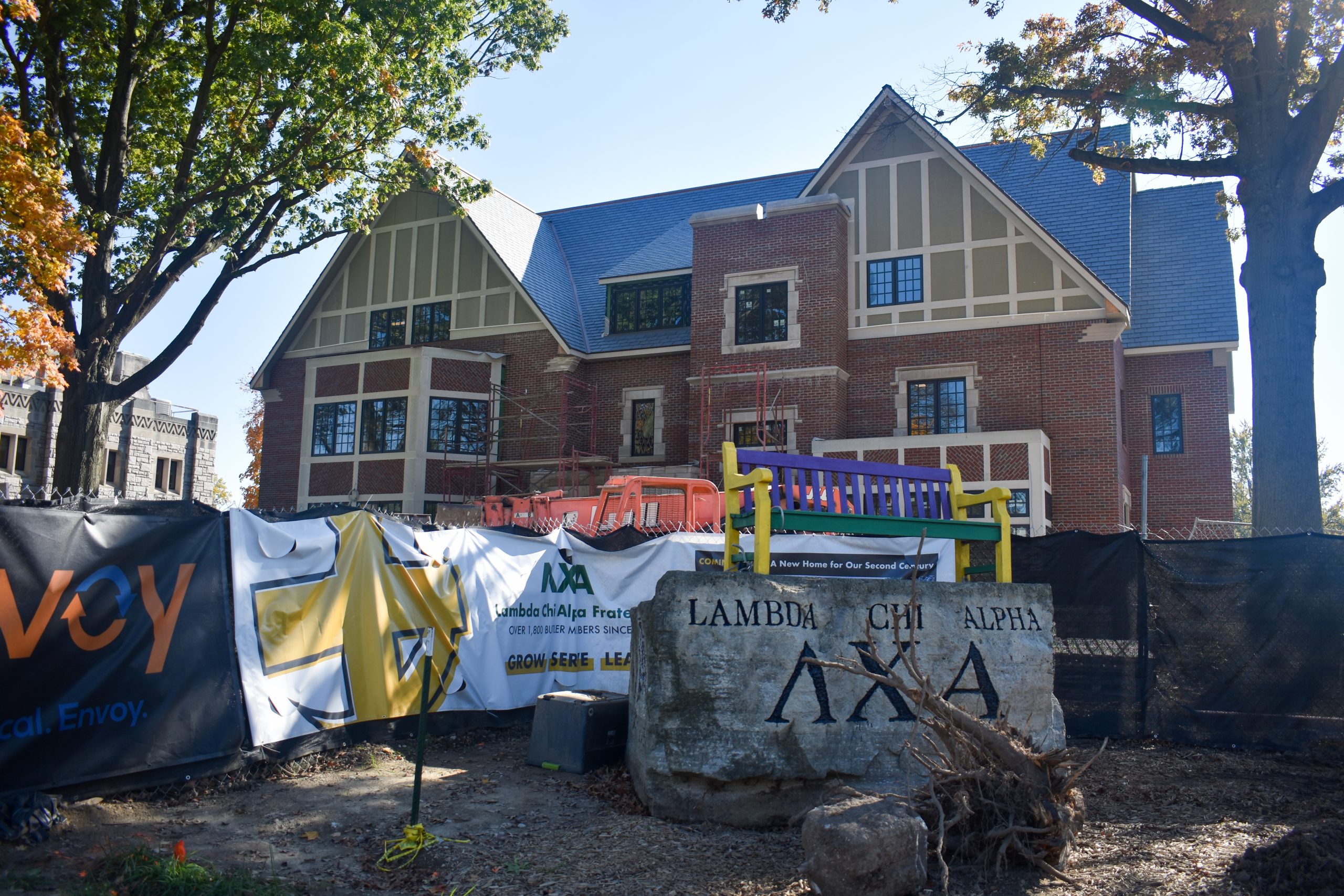 Pictured is the Lambda Chi Alpha fraternity house. The house has been under construction since early 2020. Photo by Lauren Jindrich.

Construction and renovation projects on campus continue as the end of the 2021 fall semester nears. The renovations on Gallahue Hall and the Holcomb Building remain on schedule while construction of Lambda Chi Alpha’s new fraternity house on Greek row is almost complete.

Meagan Burton-Krieger, the science complex project’s lead development officer, said the renovation project is still on schedule, with all construction to be completed in December of 2022, and a full opening of the project for the 2023 spring semester.

After opening the newly updated and furnished Holcomb Building prior to the fall semester, construction on Gallahue Hall is nearing its halfway point. Burton-Krieger said the Gallahue Hall renovation is being done in two sections. First they are remodeling the north end of the building and then working on the south end.

Luanne McNulty, an associate dean of the college of liberal arts and sciences, is the academic liaison for construction on the science project. She said right now, the construction crew is putting in drywall and painting on all three floors as well as placing windows in the new atrium, which is one of the last steps in the north section’s construction process.

Burton-Krieger said the north section of Gallahue Hall is almost complete and will be open for use after spring break 2022. At the same time, the construction crew will begin work on the south side of the building.

McNulty said the construction will also have a continued, but lessened, impact on students and educators after this stage is completed. While all of Gallahue Hall’s current classrooms are located in the south end and will be shut down, they will be able to relocate into the Holcomb Building easily.

“All of the classrooms that they will use will be over here, so they’ll be pretty isolated from the construction,” McNulty said. “Likewise, because Jordan is not directly connected, they should be not as impacted by construction as well.”

Burton-Krieger added to this statement, saying that it will be nice to get students away from the noise.

“The construction will be farther away from the active learning than it has been this semester,” Burton-Krieger said.

The entire science complex project is going to cost Butler $100 million, and Burton-Krieger said $30 million has been raised towards their goal of $42 million.

The science complex project is the largest renovation in Butler history which Burton-Krieger is excited about.

The construction of the new Lambda Chi Alpha is nearly completed, and the finishing touches on the newest building on Greek row will be coming by the end of the semester, said Lambda Chi alumni chairman and senior finance and healthcare management major Malcolm Sullivan.

He said most members of Lambda Chi will move out of University Terrace and into the new house on Greek row for the start of the spring semester. Sullivan also said that the interior is nearly finished, and he has gotten a sneak peak of what the end product will look like.

“It’s gonna look beautiful,” Sullivan said. “And we’re really excited to have the chance to live in there and have some very good memories as well.”

He said that currently the construction crew is tiling the floors and finishing up details on both the interior and exterior of the house. Sullivan also said that to get to this point in the process, the fraternity had to overcome some obstacles.

The project was originally intended to be finished before the fall semester, but due to COVID-19-related setbacks it has been pushed back until the spring. He said the biggest problem has been the rise in cost of raw materials during the pandemic, causing the project to cost $2 million more than was originally planned.

After the work that went into the project, Sullivan said the fraternity is excited to get the chance to move into their new home.

“Although I’ll really only get to have one semester in that house,” Sullivan said. “It’ll still just be absolutely spectacular.”

Both of these projects will add to an updated look on campus in the coming years.