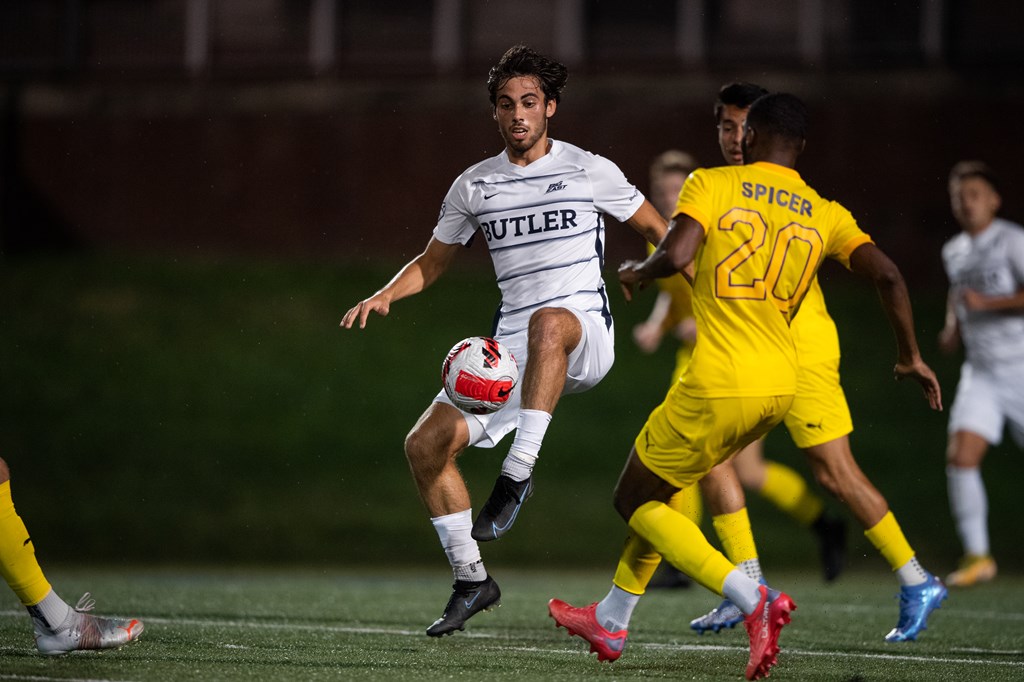 Everyone dealt with the lockdown in different ways: some spent time watching TV, some read books, others ate a lot and some even spent the time exercising. For Quint Breitkreuz, a freshman midfielder on the men’s soccer team, a strict lockdown in Germany meant time to consider his future.

Breitkreuz had heard from his friends about the possibility of playing college soccer in the U.S., so he began to do his own research. The midfielder had been playing professionally for Teutonia 05 — his hometown team — in the German fourth division, which meant he had a good chance to receive a full scholarship at a high-level division one school.

Butler head coach Paul Snape was the second coach to call, but he wasn’t initially looking for German players. Snape called a friend of his who had a recruiting company in Brazil to ask about players. After finding no luck in Brazil, Snape’s friend suggested that he look at a player from Germany, Quint Breitkreuz. After watching a few games and highlights Snape knew he had a talented player on his hands.

“You could tell immediately that he possesses a ton of ability,” Snape said. “I’m like ‘wow, and he’s available’.”

Despite Breitkreuz having relatively good English, a translator assisted with initial conversations. Breitkreuz loved Snape’s vision for his future and the program he had built over his 11 seasons.

“The first talk we had I really enjoyed,” Breitkreuz said. “I enjoyed the talk as well as what [Snape] wanted to achieve with the team.”

The 19-year-old may not have the stats to show it, but he has been a crucial piece to the Bulldogs midfield this season, logging big minutes in every game. Breitkreuz displayed his full potential against Marquette earlier in the season, assisting on a goal and scoring the game-winner in overtime. The performance against Marquette helped Breitkreuz earn Big East Freshman of the Week Honors.

Although Breitkreuz’s impressive career in Germany has prepared him to shine, college soccer took some time to adjust to. Not only are there weird lines all over the field — football lines — but you can substitute players in and out freely, something Breitkreuz had not played with before. The speed at which college soccer is played was also a surprise for Breitkreuz.

Moving across the world isn’t easy, and Breitkreuz was well aware of the challenges that came along with it. However, to Breitkreuz, Butler offered what many other colleges didn’t — a support system. This system included mentors that had also personally moved from another country to be a part of the men’s soccer program — including Snape himself — who grew up in England.

“We have some Europeans here and [Snape] is also from England, so it was a good connection,” Breitkreuz said.

One of the other Europeans on the team is Breitkreuz’s roommate and fellow teammate freshman midfielder, Philip Halvorsen. Halvorsen made a similar move to the U.S. from Norway, and the two have benefited from being in similar situations.

“We have had a lot of the same needs since coming here, and we have figured it out together,” Halvorsen said. “We respect that we both want to call home, and we give each other space for it. This is something we value highly.”

Breitkreuz isn’t just a talented player on the field, in fact, the most impressive aspect about him is his character. Known for bringing a smile to every occasion, Breitkreuz is a team favorite. When he’s not lifting spirits, Breitkreuz is caring for his teammates on and off the field.

“He cares a lot about the people closest to him,” Halvorsen said. “I have noticed that he wants the best for me, especially on the field where we sometimes play in the same position and therefore one of us has to go in for the other.”

The future is certainly bright for Breitkreuz — who has the talent and character to be a centerpiece for the men’s soccer program for the next three years. For Breitkreuz, though, the future is the future and staying in love with the game in the present is always the end goal.

“I just enjoy playing soccer,” Breitkreuz said. “Of course I want to win, but having a good time with the team is important as well.”

Quint and the Bulldogs are in action this Thursday against 16th ranked Providence for the Big East semifinal game held in Washington, D.C.