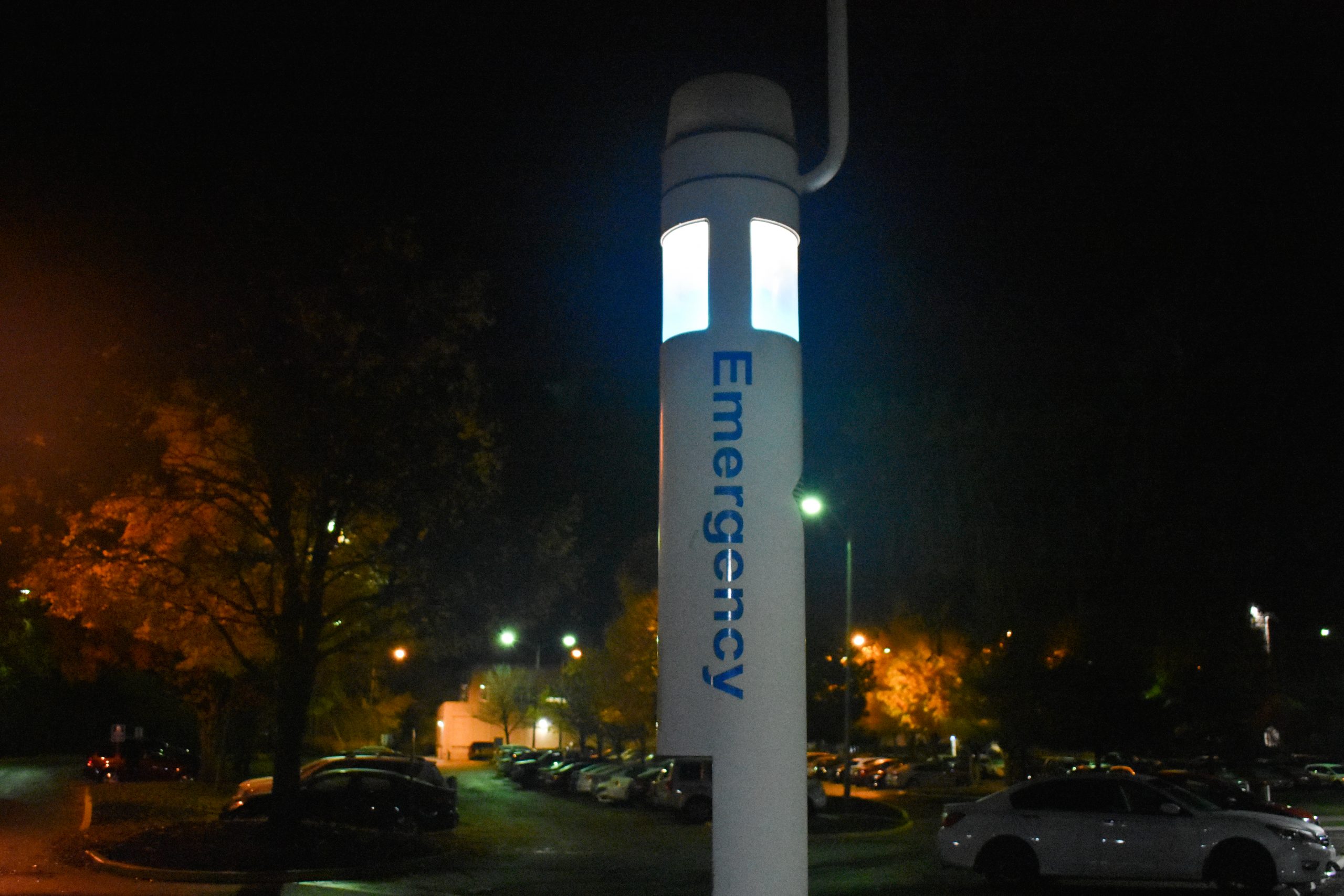 Pictured is a blue light. They are part of the university’s efforts to promote safety on campus. Photo by Lauren Jindrich.

Students’ worries about safety on campus have been amplified following an armed robbery that occurred near campus Nov. 7.

The robbery took place shortly before midnight and, according to the timely warning report sent out by Butler University’s Police Department on Monday, Nov. 8, the assailant was wearing a Halloween mask and robbed the victim at gunpoint.

Roy Betz, sergeant of emergency preparedness and training for BUPD, could not comment directly about the ongoing investigation into the robbery, but he did say that students’ need to be vigilant about their personal safety.

“If you’re walking alone across campus, especially at night, travel in well-lit areas if you can,” Betz said. “Make sure that you’re looking around, you’re watching your surroundings, you don’t [want to] get yourself buried in your phone. It’s kind of easy to have your cell phone right in front of you and that takes your attention away from what’s happening in front of you.”

The proximity of the robbery to campus caused some students, like Hayley Howard, a first-year health sciences major, to worry about their own safety.

“I wasn’t really surprised, but I was kind of in shock because it was so close,” Howard said. “[Crime has] always kind of been a little bit further away, but then it felt a lot closer than it has been.”

According to the annual security and fire safety report — which reports for the full calendar year — released by BUPD earlier this year, in 2020, there was one robbery within the jurisdiction of Butler University Police Department. In Indianapolis, in the past week alone, there have been more than 30 reported robberies, according to CityProtect, a website where residents can see reported crimes in their areas.

Despite the lessened number of crimes on Butler’s campus relative to Indianapolis, Betz recommends that every student look at the BUPD personal safety website for tips to keep themselves safe.

Some of the tips offered for walking alone include walking a well-traveled route, walking in well-lit areas and having your keys ready to use when you reach your destination.

Betz said BUPD also has cameras in place throughout campus, as well as on some of the Code Blue Poles.

Betz assures students that as a student presses the button on a blue light pole, they will almost immediately be put into contact with a BUPD dispatcher who can send officers to help.

Senior accounting major, Olivia Beeman, lives off-campus and thinks about her safety when she’s walking alone at night. She walks well-lit paths, tells her friends when she’s leaving and where she’s going, and she carries pepper spray with her.

Beeman said that people should take some precautions to protect themselves, such as paying attention to their surroundings when walking.

“I think people need to be aware of their surroundings, and as much as we are in our Butler bubble, things like this can still happen,” Beeman said.

Despite her precautions to protect herself, she also said that she has never had an experience when she felt specifically unsafe.

“I think Butler’s a very safe campus, as much as this event might have scared younger students, this is something that doesn’t happen as often on campus,” Beeman said. “As much as we are near a city, it is a safe campus, and I have rarely felt unsafe.”

Along with discussing personal safety to prevent crimes, Betz emphasized that if a student does become the victim of a crime, they should immediately call the police.

Students have both emergency and non-emergency numbers on the back of their Butler IDs that can be used to contact the police.