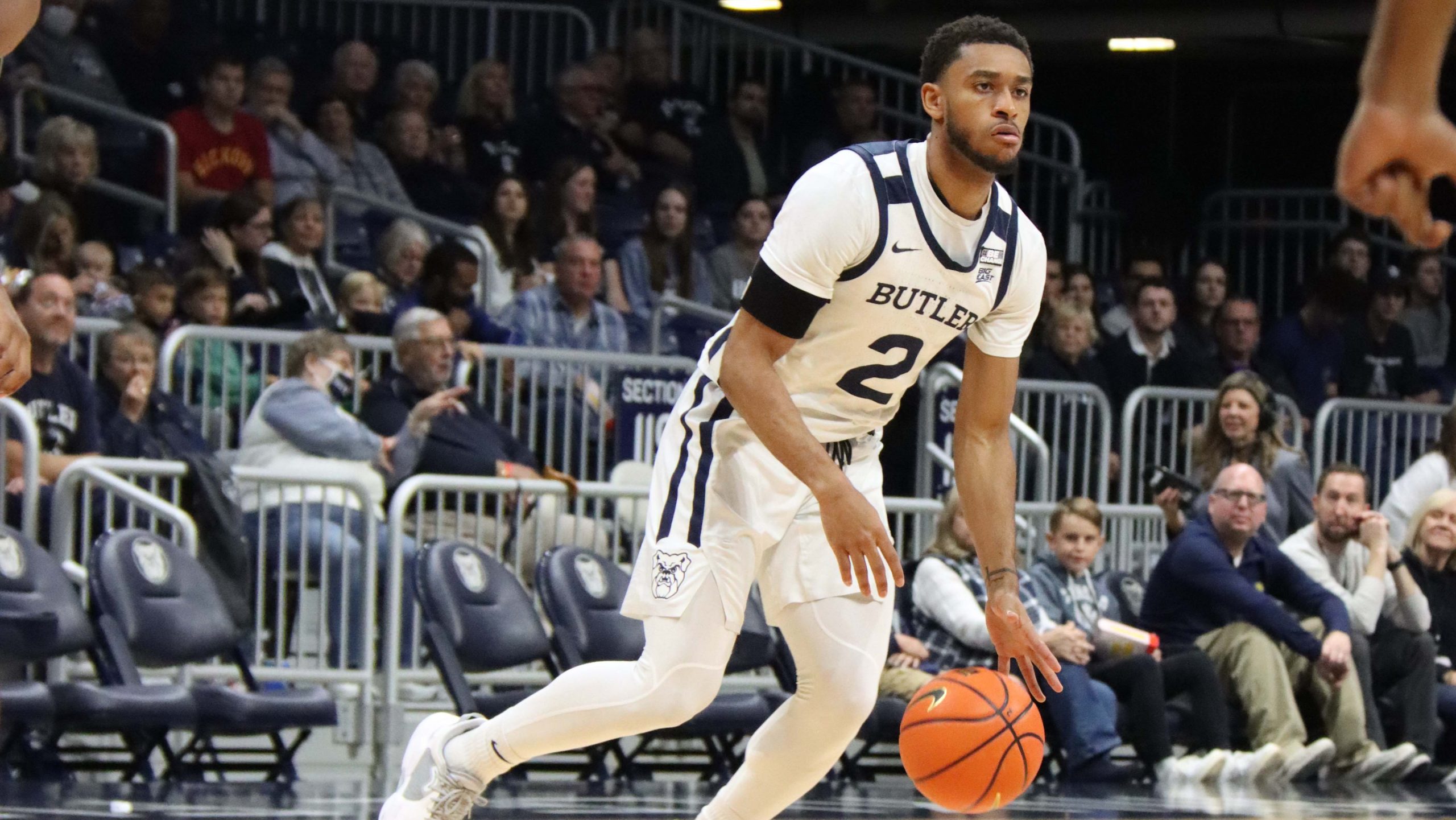 Graduate Student Aaron Thompson dribbles the ball in a matchup against the Tiffin University Dragons on Oct. 30. The Bulldogs went on to win 94-84. Photo by Francie Wilson.

Butler put up an encouraging performance against Tiffin winning 94-84 to open their season on Oct. 30. Freshman Jayden Taylor led the scoring with 25 points and Bryce Nze added 23 points. This weekend brings another important exhibition match as the Bulldogs take on the University of Indianapolis to prepare for the regular season.

Here are some things to look out for ahead of this week’s matchup:

Who: Butler vs. University of Indianapolis

While key players Chuck Harris, Bo Hodges, Myles Tate, and Ty Groce sat out last week — there were some unexpected performances that may influence head coach Lavall Jordan to rethink his normal rotation. Due to injuries, Jayden Taylor was given the nod to start and it paid off as he was unstoppable, shooting 5 of 6 from behind the arc. His fellow freshman and former European pro Simas Lukosius also contributed, scoring eight points off the bench. Together, the freshman combined for a total of 50 minutes played against the Dragons.

After their successful performances, it wouldn’t be a surprise to see them be granted the same amount of game time this Saturday and have a similar impact. Although Harris will return to the starting lineup after sitting out the first exhibition game, Taylor will most likely serve as the sixth man and provide a flashy scoring option off the bench. Lukosius adds flexibility because of his size as a wing with the handles and shooting skillset of a guard. The remaining freshmen — DJ Hughes and Pierce Thomas — will hopefully see more of the floor during the game as well.

In the Great Lakes Valley Conference, UIndy is ranked fourth in the GLVC preseason poll. UIndy averaged 68.3 points per game last season, and have the ability to score consistently with a field goal percentage of 44%. The Hounds were effective last year in drawing fouls and getting to the line, attempting 13.5 free throws per game during the 2020-21 season. They also held a strong defensive scheme, averaging 6.3 steals per game and converted it into points with 14.5 points per game off turnovers. After committing 11 turnovers against Tiffin, the Bulldogs will need to protect the ball better this weekend if they’re looking to dominate against UIndy.

Butler has cultivated a deep and versatile backcourt this year that will take command of this weekend’s fixture. With the senior leadership and elite play of Aaron Thompson and Jair Bolden — the younger guards have a reliable safety net to fall back on. Jayden Taylor has arrived, hoping to prove he deserves substantial minutes. Harris returns this weekend and will undoubtedly be motivated to start the season on a good note.

On the other hand, Bo Hodges will miss the beginning of the season following a tibial plateau fracture in his left knee that he suffered in late August. Myles Tate continues to recover from an ACL injury and will miss this matchup and likely the beginning of the season. However despite these injuries, this game should reflect the kind of depth there is at the position.