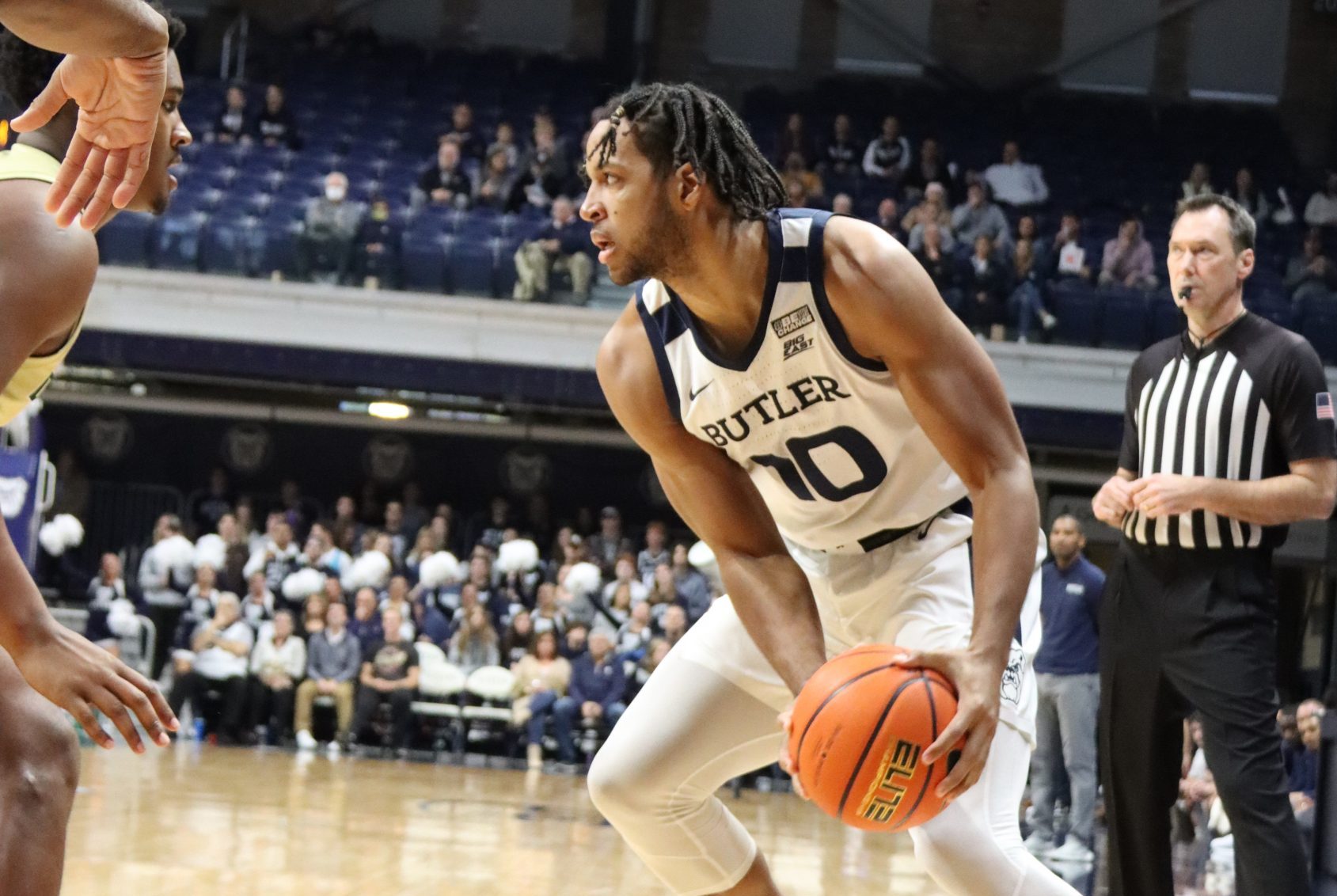 Graduate student Bryce Nze looks to drive in Butler’s 94-84 win over Tiffin on Oct. 30. Nze finished the game with 23 points and 10 rebounds. Photo by Francie Wilson.

Chuck Harris did not participate in the game due to a violation of team rules according to head coach LaVall Jordan, but he will be back on Friday for the second and final exhibition game versus UIndy. Graduate transfer Ty Groce also did not participate, although he is not injured nor did he violate team rules.

The Bulldogs’ offense looked in midseason form, shooting 58% from the field and 40% from beyond the arc. The team also racked up 20 assists and 37 field goals, 10 of which came from point guard Aaron Thompson.

After Butler’s first game action in over seven months, let’s go beyond the box score to see what can be gathered from the first preseason game.

Nze and Thompson both played big minutes, which is no surprise given their experience and value to this team. The pair clearly have excellent chemistry with each other, as Thompson continued to find Nze open in the paint versus smaller defenders. After the game, Nze talked about his connection with Thompson.

“I’ve played with Aaron for a while now, so we know how to feed off of each other very well,” Nze said. “I know what spots he likes to get to and he knows where I like to get to to put each other in good situations.”

Taylor played the third most minutes for the Bulldogs, wiping away all questions of whether or not he will crack the deep, experienced rotation. With Bo Hodges and Myles Tate out for at least the beginning of the season, Taylor may even find himself in the starting lineup, especially if he continues to shoot the ball lights out like he did today,

Golden played nearly 25 minutes, and was able to bully the smaller Tiffin lineup in the paint. He finished with 10 points and nine rebounds, eight of which came in the second half.

Butler only played the two backup big men, Myles Wilmoth and John-Michael Mulloy, a total of 15 minutes. Jordan elected to stagger minutes between Golden and Nze so that one would be on the court for the majority of the game.

Bolden retained his spot in the starting lineup from last season for this game, scoring 13 points and hitting three of seven 3-pointers. With Harris almost guaranteed to start, Bolden or Taylor will be the odd man out of the starting lineup, and Groce’s return could mean both will come off the bench. Whether they are starters or not, it’s clear both will be a significant part of the rotation.

Lukosius played the fifth most minutes on the team and was not used as much as a primary ball-handler because he was paired with Thompson for much of the game. Lukosius is unlikely to start, but his 22 minutes are an indication that he will be a part of Jordan’s rotation.

Finally, freshman guard Pierce Thomas and redshirt senior forward Christian David played 10 minutes each. At the moment, it does not seem they will play significant minutes, especially with Harris and Groce in the lineup. Freshman forward D.J. Hughes and redshirt junior forward Mike Parker dressed but did not see any game action.

First Look at the Freshman Class

All eyes were on Jayden Taylor tonight, and for good reason. In his first collegiate game, he scored 25 points on just 11 shots, hitting four of six from three and five of six from the free throw line. He proved he is more than just a great perimeter shooter by driving to the basket, drawing fouls and playing solid defense on the other end of the floor.

After the game, Taylor was happy with his performance, but not satisfied.

“Defensively I feel like there is stuff I need to work on and offensively there’s things I feel like I can be better at,” Taylor said. “Obviously shots were going in today and that was good, but it’s not gonna be like that all the time. But I can rely on my defense all the time, so just tightening up my defense and I feel like I’ll be good.”

Lukosius had a solid performance in his first collegiate game. Although he played off the ball for much of the game, he showed flashes of excellent passing and an ability to use his size and handles to get to the rim and draw fouls. He was a perfect 3-3 from the free throw line, a promising sign for a team that struggled from the charity stripe last season. He looked a step slow on defense at times and had moments where he wasn’t sure where to be on the floor, but that can be chalked up to only being with the program for two months.

In Thomas’ 10 minutes of action he showed his incredible jumping ability and speed. He did not make a shot on three attempts, but it appears that the tools are present for him to be a good role player on the current team and looks to have a promising future with Butler.

After the game, Jordan seemed pleased with the performance of the three freshmen, but emphasized that they all need to continue improving.

“Obviously all those young guys are learning, I thought they all showed flashes and had good moments,” Jordan said. “And then they also looked like first-year guys at other times…That’s part of the process, you’re gonna have some moments, just keep yourself with a growth mindset and get better every day.”

While Butler’s offense looked great, the defense had trouble with the pace and shooting of Tiffin. The Dragons shot 15-29 from three, with Tanner Johnson and Tylin Lockett-Fuller shooting a combined 11-13 from deep. Johnson made seven 3-pointers in a row before missing his first midway through the second half.

Tiffin was scorching hot from three throughout the whole game, but the Bulldogs perimeter defense was allowing a lot of open looks and let Tiffin’s shooters get into their groove. Jordan said there were some miscommunications on switches that left shooters open, and emphasized the need for more pressure on the ball.

The interior defense didn’t play particularly well either, especially given the size difference between the two teams. Tiffin scored 28 points in the paint, many of which came on wide open looks from either a man getting beat or miscommunication on the inside. Some of this can be attributed to Jordan trying out different lineups with guys that may not be used to playing with each other, but the interior defense will need to improve when Butler plays opponents with more size.

All in all, the Bulldogs can take a lot of positives from this game and evaluate what needs to be improved. Butler’s second and final exhibition game is on Friday, Nov. 5 versus the University of Indianapolis. With Harris and possibly Groce in action, that game will give Butler fans an even better sense of what the team will look like heading into the regular season opener on Nov. 9 against IUPUI.