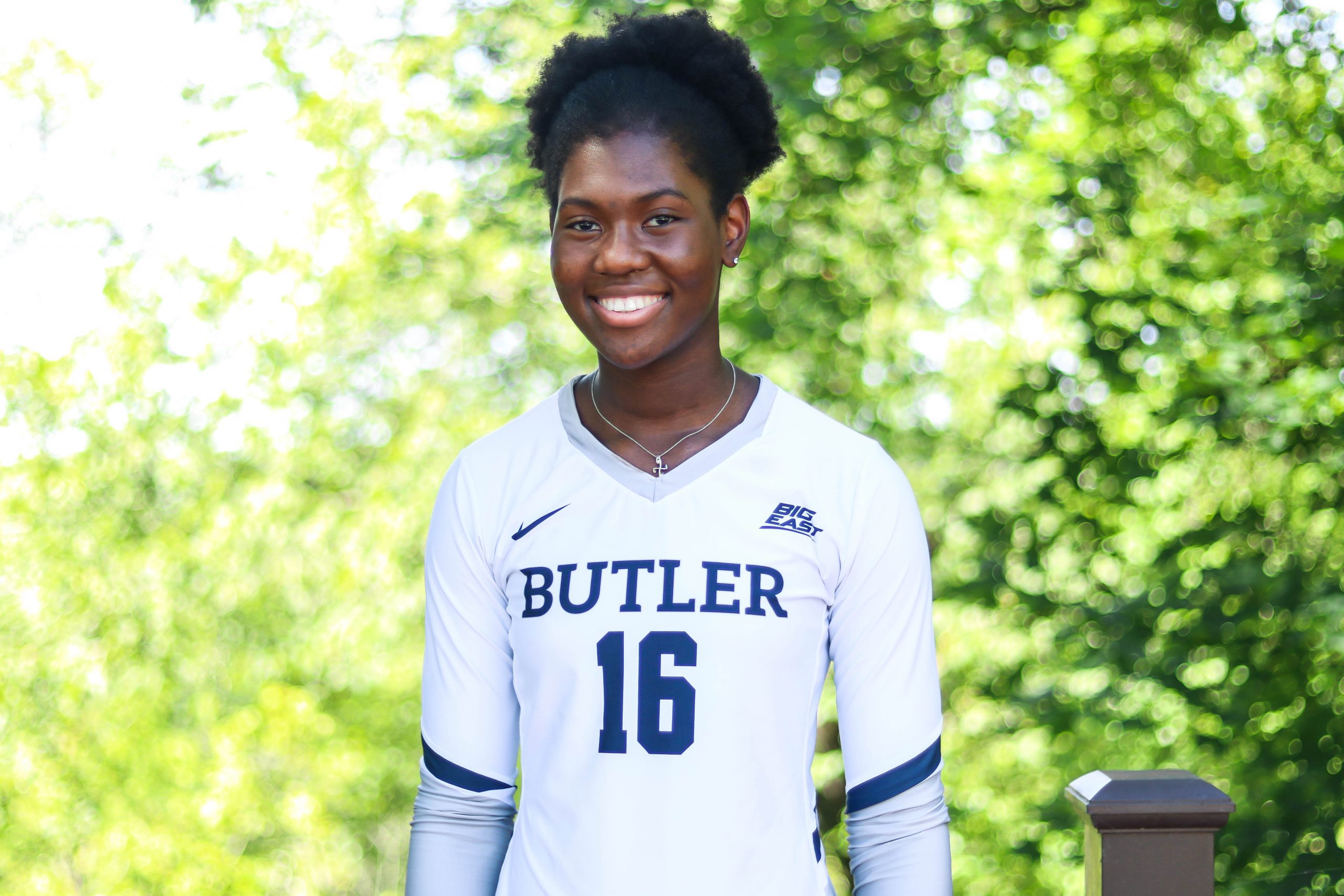 Melody Davidson, senior and number 16 for Butler’s Women’s Volleyball, poses for a picture. Davidson with the rest of the team will face off against Depaul and Marquette this weekend. Photo by Ben Caylor.

Melody Davidson first picked up a volleyball in sixth grade and played for a coach who had to Google the rules of the game. Now, Davidson averages 3.51 kills and 1.20 blocks per set — leading the Butler volleyball team in both areas.

At Liberty Christian High School in Anderson, Indiana, Davidson played both basketball and volleyball. In volleyball, she played a total of 149 sets and contributed 413 kills and 281 total blocks. However, even with her impressive stat line, she truly focused on basketball, playing AAU ball instead of club volleyball her first three years of high school.

It was at a volleyball tournament during her senior year when Davidson’s recruitment began. A Butler softball coach was there to see his daughter play when he saw Davidson play. He told head volleyball coach, Sharon Clark, he believed Davidson would be a great fit for the Butler team.

“We did not see Melody play in high school until her senior year, so it was very late,” Clark said. “Right away I saw that she was just an amazing athlete, she jumped out of the gym. She was already very strong and muscular, so very developed.”

Melody began her freshman year at Butler with occasional ups and downs. She was redshirted her first year so she could have time to grow, develop and catch up to her teammates who had played for longer.

“During that time I was sitting out a lot during practice and I got to travel with the team, but I wasn’t playing in any games,” Davidson said. “So, it was kind of tough in the beginning. After a while, I had to step back and see how I could grow as a player and be a better teammate and just be more encouraging on the sidelines and cheer on the team and have fun with it.”

During her sophomore year, she had 92 kills and 93 block assists. The next season she jumped to 215 kills, 19 solo blocks and 115 block assists.

“She by far has grown and developed more than any player that we’ve had,” Clark said. “The player she is today, you can’t even imagine or recognize what the player was when she came in as a freshman. A lot of that is just an attribute to her hard work and self-determination.”

Davidson credits much of her success to her parents, George and Dorothy Davidson, who have supported her from her days on the bench to leading her team today.

“My parents really motivated me to just work hard and just keep my head up even when things weren’t going my way,” Davidson said. “Just keeping me positive throughout that time and not always just focusing on myself, cause when you are not playing it can be hard to be a good teammate to everyone around you.”

Today, she prides herself on getting close to her teammates and forming relationships. Working with new teammates during lifts and practice has given Davidson a chance to strengthen those new bonds. She emphasized how teamwork is such a significant piece to her position as a middle blocker.

“I mean my team really encourages me a lot and gives me energy to go and block more,” Davidson said. “It’s really a team effort because I have to go and close the pin blockers. They set up the block for me, I get there, and we go up together. As much as I get the awards, they help and are a big part of that. The energy that they give me helps to keep pushing towards that.”

She received Defensive Player of the Week for the Big East after her 11 block game against St. John’s and also earned the Big East Weekly Honor Roll as she continues to dominate on the court.

On Sept. 15, she tied a 30-year old record for Butler with 24 kills in a three-set match against Eastern Kentucky.

Freshman teammate Mariah Grunze has had a lot of success as an outside hitter so far this year. She is at the net often with Davidson as she sets up the block on the left side. Through the time Grunze has spent with Davidson this season, she has learned from her leadership.

“[Melody] is a sweet and caring person that leads with action on the court,” Grunze said. “She is a role model and very humble even though everyone looks up to her.”

Grunze is not the only person who recognizes Davidson’s leadership. Clark speaks highly of her skill and more importantly her leadership skills.

“She is more of a lead-by-example type player,” Clark said. “She most definitely just gets in, gets on and does her job and her expectation is that others do that as well and they kind of follow her.”

Davidson finished her undergraduate at Butler in May of 2021 with a major in finance and minor in Spanish. After the season, she will be looking for a full-time job and completing her masters in risk management and insurance. Davidson reflected on her multitude of lessons learned at Butler which she will take with her past graduation.

“I’d say the biggest one would probably just be to enjoy the people around you,” Davidson said. “Because it’s hard to find a lot of those relationships when you leave and go into the workforce.”