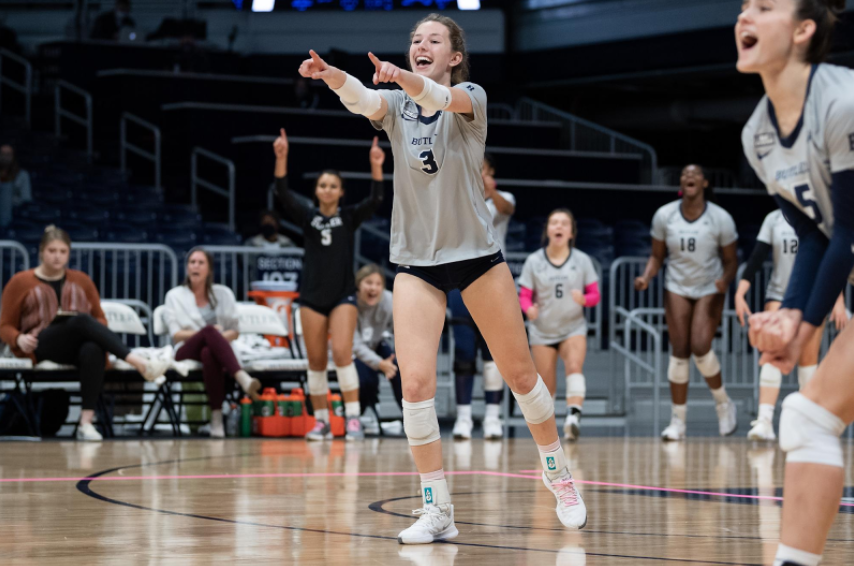 The Butler Volleyball team beat Xavier in four sets at Hinkle to win their final match of the season and send their seniors out victorious.

The first set began with an early 9-4 Butler lead with kills by sophomore Megan Sheridan and sophomore Amina Shackelford and an ace from sophomore Madison Friebel. A 3-0 run later with a kill and ace from freshman Mariah Grunze gave the Bulldogs a 17-12 lead. Later, Butler would make the score 24-14 with two kills from senior Brittany Robinson and a Friebel ace. The Bulldogs closed out the set at 25-16.

Butler began with a slower start to the second set as they found themselves down 5-8 early on. The Bulldogs then went on a 5-0 scoring run with a kill from Grunze and a service ace by freshman Marissa McKelvey. Three straight kills from Sheridan put Butler up 19-13. Friebel continued her strong serving as she provided a 4-0 run for the Bulldogs along with two service aces. Shackelford closed out the set with a kill to make the score 25-19.

Butler began down 3-9 in the third set, but rallied to make the score 8-10 with kills from Robinson and Shackelford and two service aces from senior Jillian Ziemba. The Bulldogs then went on a 6-0 run with kills from redshirt senior Melody Davidson and Shackelford to gain the lead at 14-11. Xavier rallied back with a 4-0 run to regain the lead. Later on Ziemba went on another service run which included a service ace to give Butler the lead at 23-22. The Bulldogs fought off four Xavier set points, but eventually the Musketeers took the set victory with a score of 28-30.

The fourth set was tied at 10 until Butler went on a 5-0 run sparked by a Shackelford kill to gain the lead at 15-10. A 4-0 run at the end of the set that included kills by Grunze and Davidson and a service ace from Robinson gave Butler the set and match victory with the final score of 25-15.

It was an all-around effort for the team’s victory against Xavier. Junior Jaymeson Kinley produced 23 digs which set a new Butler volleyball record for digs in a season at 595 digs. Davidson put up 13 kills, two solo blocks and two block assists on her senior day. Ziemba tied a season best with three service aces and added 11 digs. Both Grunze and McKelvey posted double-doubles — Grunze with 11 kills and 19 kills and McKelvey with 26 assists and 12 digs. Robinson provided eight kills, two blocks and an ace. Friebel contributed 19 assists, six digs and four aces.

Seniors Davidson, Robinson and Ziemba completed their Butler volleyball careers on a strong note. The Bulldogs finished the season with a 16-15 record overall and 10-8 in the Big East.