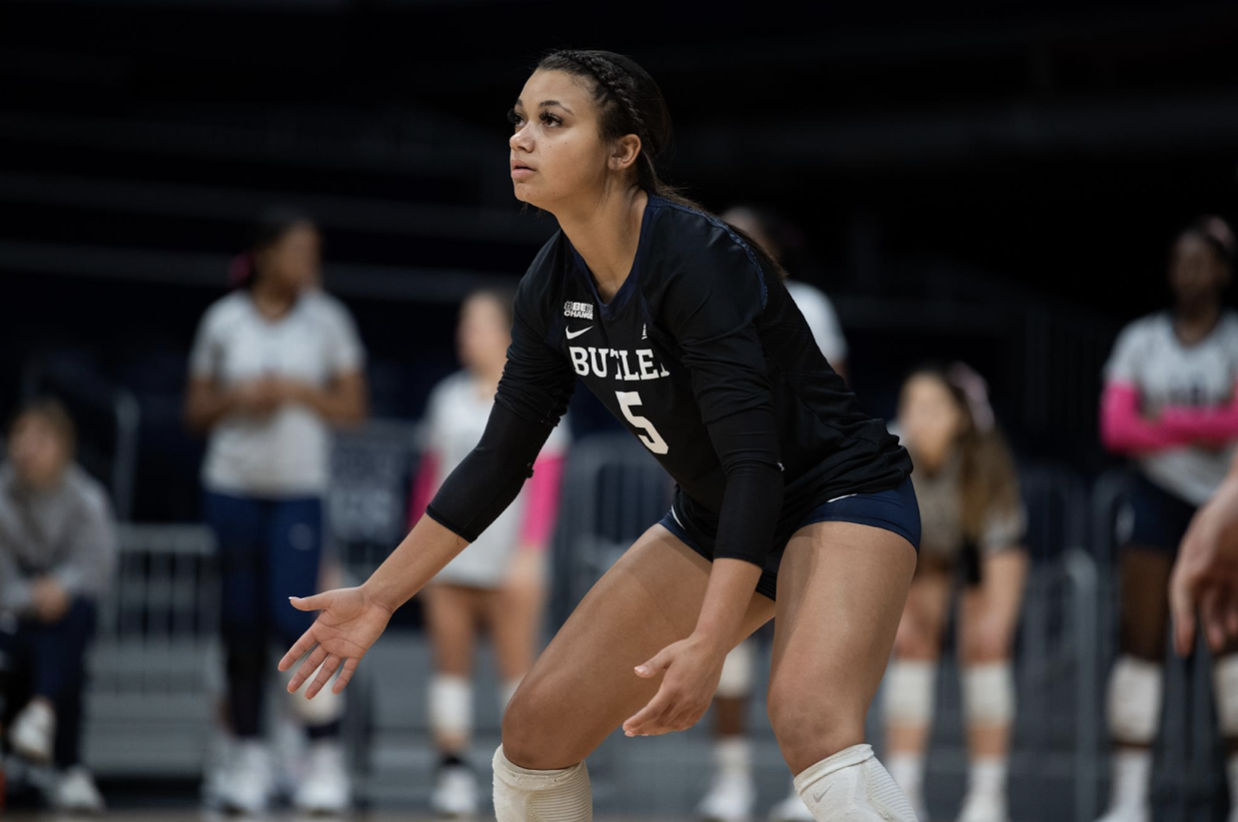 Junior Jaymeson Kinley prepares to receive a serve against Providence on Sept. 25, 2021. Photo courtesy of butlersports.com.

Butler volleyball fell to both Depaul and Marquette on Nov. 12 and Nov. 14, respectively.

The Blue Demons began with a 2-7 lead versus the Bulldogs. Butler climbed back to tie the set at 12 with help from sophomore Megan Sheridan who produced three kills. The Bulldogs then went on a 4-0 run to take their first lead at 19-17. Redshirt junior Brittany Robinson had three kills to help their run while junior Jaymeson Kinley was behind the service line. Depaul later went on a 4-0 run to finish the set at 22-25.

The third set began with a 4-0 lead for the Bulldogs including a kill by freshman Destiny Cherry. A kill by Sheridan gave Butler a 21-18 lead and then they would finish the set on a kill from redshirt senior, Melody Davidson. Davidson also put up four blocks at the net and Sheridan had four kills.

Depaul got off to an early 8-5 lead and kept it to win the match. Sheridan led with 14 kills and Davidson followed with 11 and four blocks. Sophomore Madison Friebel dished out 24 assists and freshman Marissa McKelvey added 21 assists.

On Sunday, Nov. 14, Butler fell to Marquette in three sets.

Marquette began the second set with a large lead at 7-17. They closed out the set at 12-25. For the Bulldogs, Kinley had six digs and Grunze four to help out with the defense.

Butler went on an early 5-0 run to make the score 9-7 during the third set. Davidson had four kills and a solo block during the service run. Marquette came back to take 14 of the next 18 points to take a 13-21 advantage over the Bulldogs. The Golden Eagles went on to win the set and match 17-25.

The Bulldogs will travel to UConn for a match on Thursday, Nov. 18 at 1 p.m.