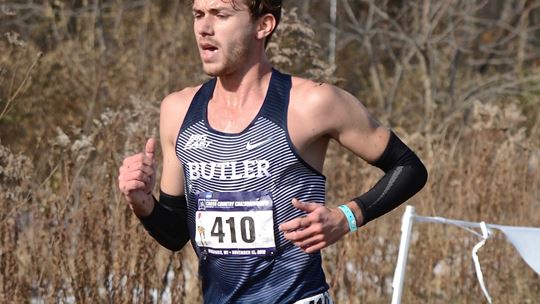 Graduate student Simon Bedard led the men’s team placing 62nd with a time of 24:10.5 at the Nuttycombe Invitational on Oct.15. Photo courtesy of Butler Athletics.

On Oct. 15, the Butler cross country team competed at the 10th annual Nuttycombe Wisconsin Invitational against a majority of the nation’s elite programs. The women finished 14th as a team while the men took 22nd, respectively.

The Bulldog women battled against 36 teams in the loaded “A” race field on the Thomas Zimmer Championship cross country course in Verona, Wisconsin.

Redshirt senior Angelina Ellis was the first Bulldog woman across the line in the 6K race at 43rd place with a time of 20:48.9. Finishing in second for Butler was graduate student Kami Hankins in 67th place at 21:05.5.

As a team, the Butler women placed ahead of top-programs in No. 7 Washington and No. 9 Stanford. Only two teams in the top-25 in the nation according to the USTFCCCA finished in front of Butler.

The No. 16-ranked Butler men’s team fought hard in a stacked field with 10 of the top 16 teams in this week’s national coaches’ poll including No. 3 Stanford and No. 6 Iowa State.

Rounding out the top five scorers were graduate student Pierre-Louis Detourbe and redshirt sophomore Jack McMahon at 111th and 173rd with times of 24:35.2 and 25:08.6.

The Bulldog men finished in 22nd with a team score of 478.

Butler will host the Stan Lyons Bulldog Invitational next week on Oct. 22 at the Northview Church Course in Carmel, Indiana as they prepare for the Big East Championships on the same course in two weeks.