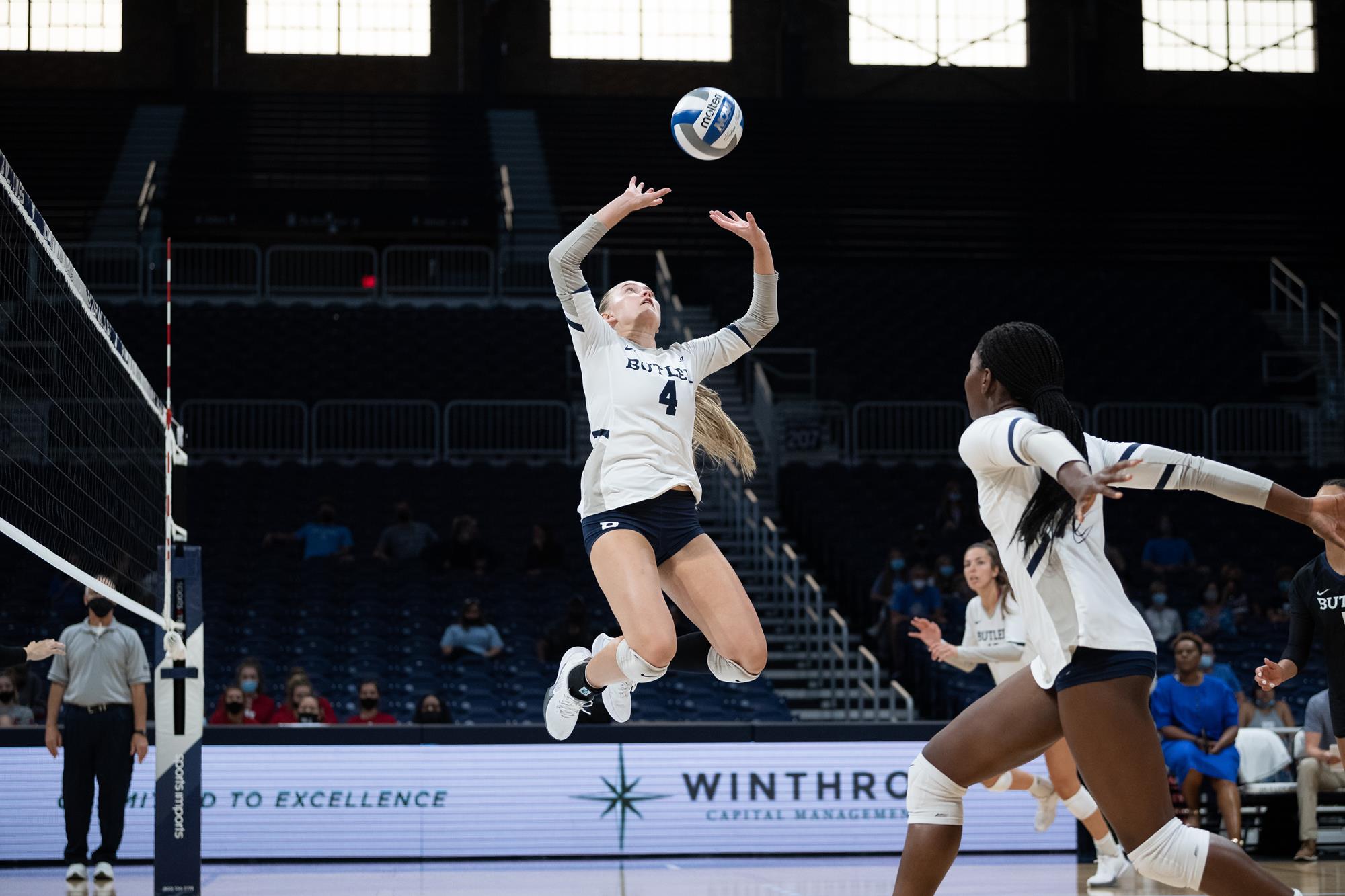 Sophomore Madison Fribel jump sets the ball to the offense against UIC on Aug. 28. Photo courtesy of butlersports.com.

Butler volleyball returned home to face off against St. John’s on Friday, Oct. 8. The Bulldogs completed a three set sweep to move their record to 9-9 and 3-2 in the Big East.

Butler began the first set with an early 7-0 lead with three kills from redshirt Junior Brittany Robinson and a serving ace from Sophomore Madison Friebel. Sideouts were traded back and forth but the Bulldogs maintained their lead with two kills from both Redshirt Senior Melody Davidson and Freshman Mariah Grunze to make the score 14-7. Grunze continued to succeed with a four serve run to build a ten point lead at 20-10 which included two serving aces. The set concluded with a kill from Grunze with Butler winning with a score of 25-15.

The Bulldogs started the second set slowly with a 0-5 deficit to St. John’s. The team fought back to make the score 9-10 with kills by Freshman Grace Boggess, Davidson and Grunze. Sophomore Caroline Cleveland also contributed with a serving ace. After winning a side out while beingdown 9-13, Friebel contributed a nine point serving run. Friebel recorded three serving aces while also registering two assists during the sequence. Although St. John’s went on a 4-0 run late to put the score at 24-21, Butler concluded the set with a kill by Davidson.

Butler began the third set down 1-3 but had a huge block by Sophomore Amina Shackledord and Boggess to give the Bulldogs the ball. Cleveland had the serve at 7-7 and provided two service aces along with a kill from Davidson to give Butler the lead at 9-7. Butler never gave up the lead although St. John’s tied the set at 18. The final score was 25-23 with the last point ending on a stuff block by Shackelford and Robinson.

The offense was very spread out throughout the game as Davidson, Grunze and Robinson—all recorded eight kills. Shackelford led with five blocks and Robinson behind her with four. Friebel contributed 22 assists and six digs. Junior Jaymeson Kinley led the defense with 19 kills and added a service ace.