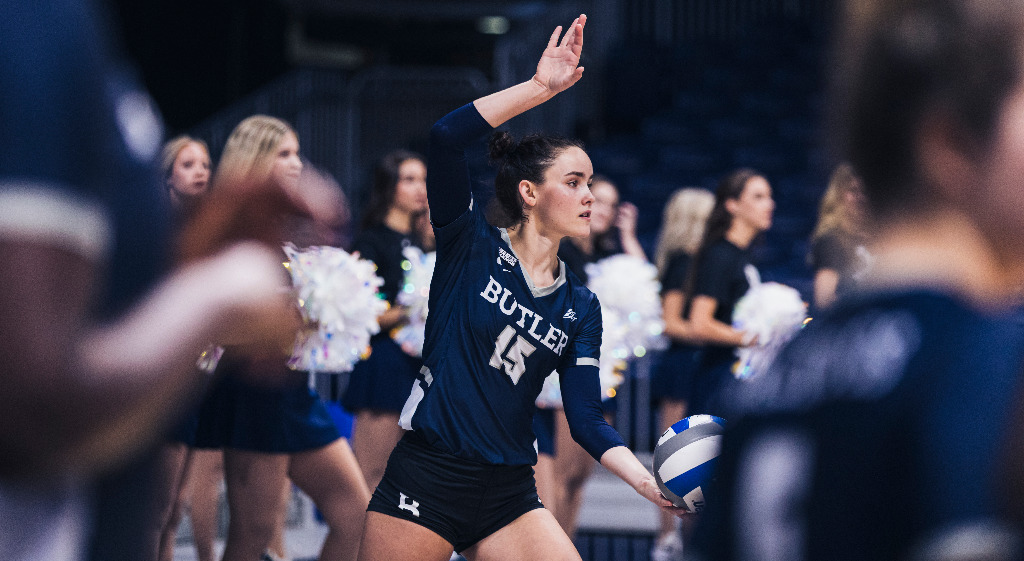 Sophomore Caroline Cleveland prepares to serve the ball against Providence on Sept. 25, 2021. Photo courtesy of butlersports.com.

After being swept by Seton Hall on Oct. 9, the Butler Volleyball team returned the favor as they won in three close sets.

Butler began the first set down 7-11, but with help by a 7-0 run on Redshirt Junior Brittany Robinson’s serves, the team took a 14-11 lead. Following kills from Sophomore Megan Sheridan, Redshirt Junior Melody Davidson and Freshman Destiny Cherry, the Bulldogs climbed up to 17-13. The Pirates managed to catch up at 23-21 with back-to-back kills, but Butler clinched the set at 25-23.

The Bulldogs got off to an early 5-2 lead in the second set as Freshman Mariah Grunze contributed one kill and two service aces. The set was tied at 8 when Sophomore Caroline Cleveland went behind the serving line and went on a 4-0 run — including one service ace. The teams continued to go back and forth until Freshman Marissa McKelvey pushed for another 4-0 service run — which included two kills by Davidson —  and finished the set at 25-20.

Butler began the third set with a 7-5 lead with two kills by Davidson and one by Sophomore Amina Shackelford. With the set tied at 20, a kill by Sheridan gave Butler the lead. The Pirates fought back and tied it again at 22, but a kill by Sophomore Madison Friebel helped seal the win.

Davidson led the team with twelve kills with Sheridan and Shackelford following with eight. Cleveland led the defense with 11 digs and also contributed 2 service aces. Friebel and McKelvey had 19 and 17 assists, respectively.

Butler will face off against Xavier on Friday, Oct. 29 at 6 p.m. in Cincinnati.