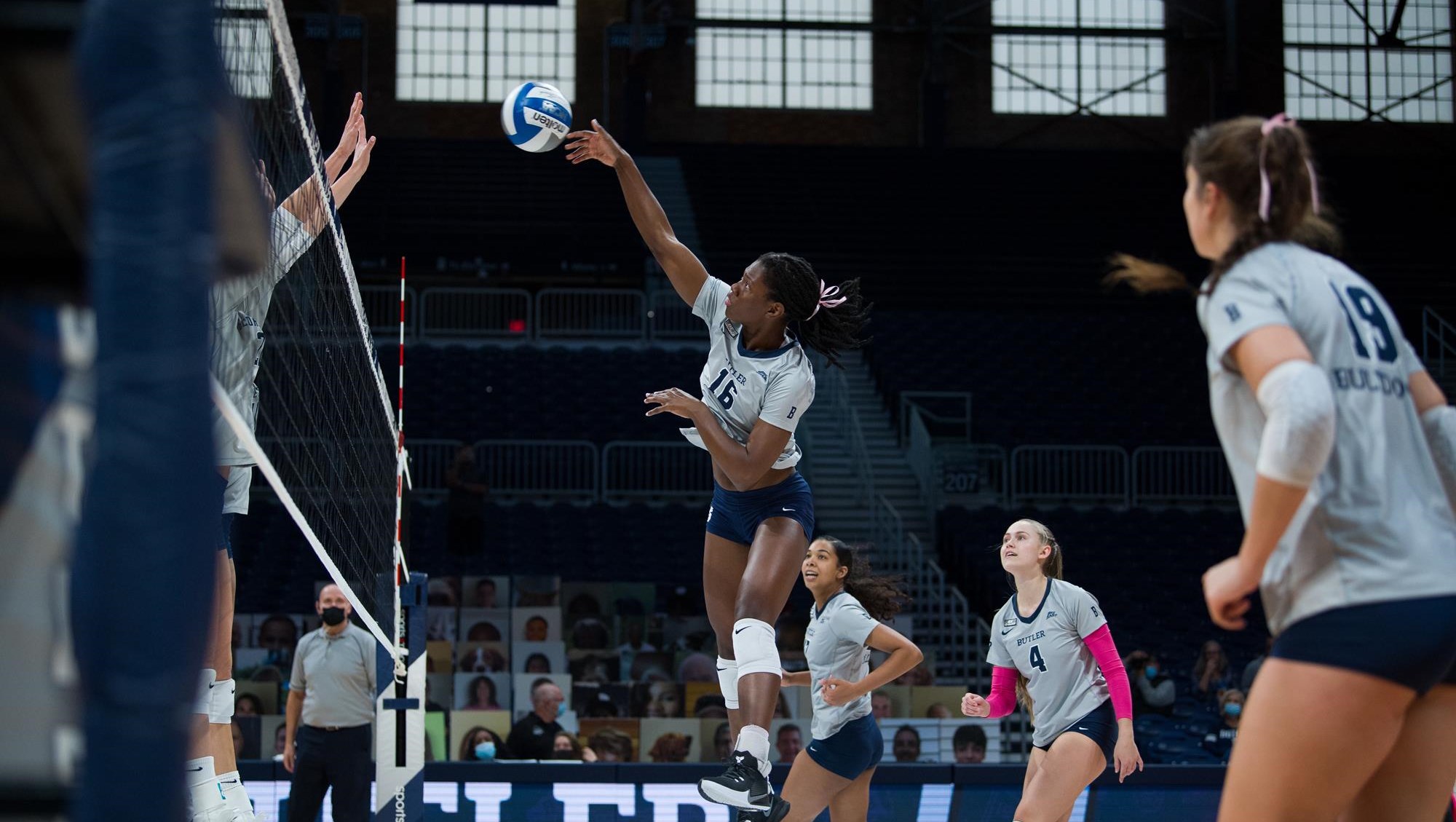 Redshirt Senior Melody Davidson goes up to hit the ball against Georgetown on Oct. 1. Photo courtesy of butlersports.com.

Butler Volleyball beat St. John’s on Oct. 24 in four sets to improve their record to 12-11 overall and 6-4 in the conference.

The Bulldogs began the first set with a comfortable 9-5 lead with Freshman Mariah Grunze, Sophomore Amina Shackelford and Redshirt Brittany Robinson all providing two kills each. Later on, St. John’s went on a 5-0 run to make the set 21-23 with Butler trailing. Redshirt Senior Melody Davidson scored on an assist by Sophomore Madison Friebel to tie the score at 24, but the Bulldogs fell short 24-26.

The second set began with Butler down 6-14. The team began their comeback with a 4-0 run on Sophomore Caroline Cleveland’s serves to make the score 16-18. Kills by Freshman Destiny Cherry and Shackelford and a service ace by Robinson gave Butler their first lead of the set at 24-23. St. John’s scored two points in a row to receive a set point at 25-24 but Butler closed the set with three straight points.

Two kills by Shackelford and one from Robinson contributed to a 4-0 opening run by Butler in the third set. The Bulldogs maintained a solid lead throughout the set and won 25-14. Robinson and Shackelford both led the team with four kills each during the set.

Butler got off to a strong 4-1 lead in the fourth set, which included kills from Robinson and Grunze and a service ace from Freshman Marissa McKelvey. Cleveland later went on a 5-0 serving run to put the Bulldogs up 22-15. Butler went on to win 25-17 and take the game in four sets.

Robinson led the team with 15 kills with Shackelford following with 11. Davidson had a season-high 11 block game along with her seven kills. McKelvey led with 22 assists and added two service aces as well. Junior Jaymeson Kinley led Butler with 17 digs and Cleveland followed with 10.