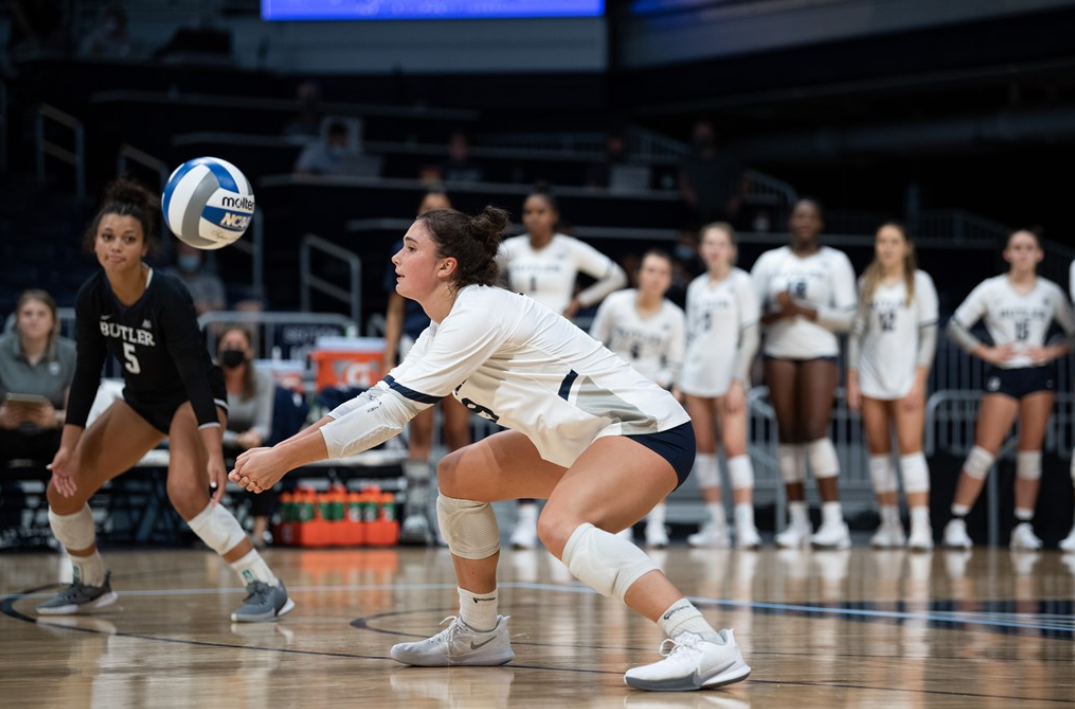 Butler volleyball traveled to Georgetown on Oct. 1 and beat the Hoyas 3-1 in sets.

Georgetown got off to an early 6-2 lead in the first set, but the Bulldogs returned back with an 11-10 lead with kills by redshirt senior Melody Davidson and freshman Mariah Grunze. A 4-0 run by the Hoyas increased their lead to 19-14. A kill by Davidson and back-to-back kills by freshman Marissa McKelvey tightened the game at 18-20. Georgetown responded with four straight points then closed the game at 25-19.

The second set began with kills by redshirt junior Brittany Robinson and Davidson. After a 5-7 Butler deficit, the Bulldogs pushed to a 12-9 lead with kills by McKelvey, Robinson and Grunze. Butler never gave up the lead as they defeated Georgetown 25-23, concluding on a kill by junior Elana Brueggemann. The ball was spread evenly throughout the set as Bruggemann, Davidson, Grunze and Robinson all had three kills.

Georgetown had a 6-4 lead early, but a serving run from sophomore Caroline Cleveland, along with a serving ace, gave the Bulldogs a 9-6 lead. Later, a 4-0 run from Butler improved their score to 18-16 with two kills from Davidson. The Bulldogs closed out the set 25-23 with kills from Robinson and Davidson.

The fourth set rolled around and Georgetown got out to a 6-3 lead. Two kills by both Amina Shackelford and Brittany Robinson and a service ace by senior Jillian Ziemba tied the set at eight. Sophomore Megan Sheridan entered the game and recorded four kills and one block assist. The game surpassed 25 points as Butler rallied to win 30-28.

Over the course of the game, Davidson led with 18 kills, Robinson with 10 kills and five blocks, and Grunze with 10 as well. Junior Jaymeson Kinley led the defense with 29 digs, McKelvey with 13 digs and 47 assists and Grunze with 11.

Butler will return home to Hinkle Fieldhouse to play St. John’s on Friday, Oct. 8 at 6 P.M.