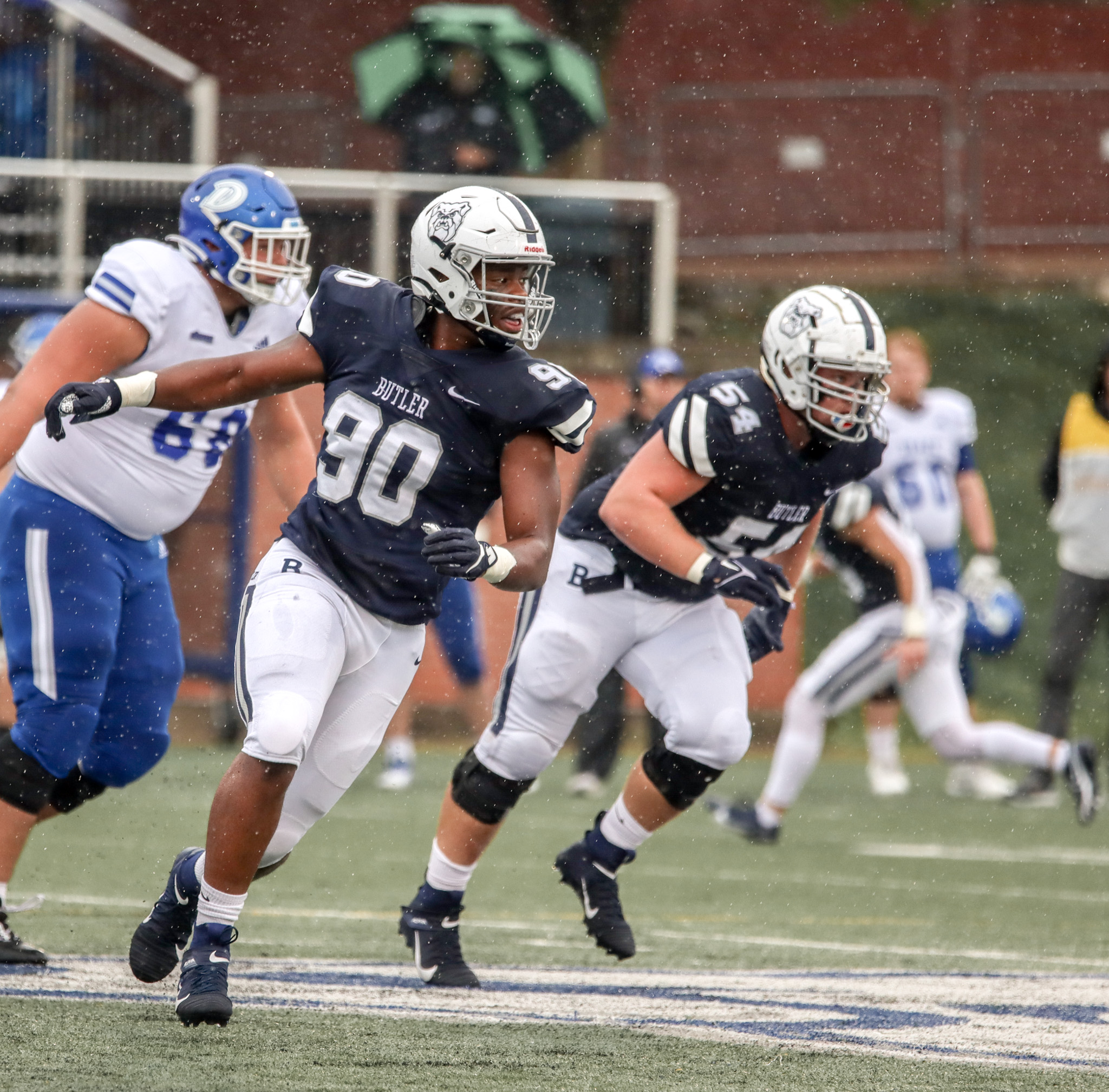 Defensive linemen Jordan Caselberry (left) and Austin Korba (right) pursue the ball carrier during their matchup against Drake on Oct. 2. Butler went on to lose 6-3. Photo by Grace Denckhoff.

It has been another busy week for Butler Athletics, with many Butler teams having games, matches, meets and tournaments this week from New York to Des Moines.

The men’s soccer team traveled to Huntington, West Virginia for an important matchup against fifth ranked Marshall. The Dawgs ultimately fell 2-0 to Marshall, but the team was still able to put up a strong fight and make the game competitive. The team had an additional home game scheduled for Oct. 2 versus Seton Hall, but due to the heavy rain in the forecast, the game was postponed to a later date.

The women’s soccer team traveled to New York for an in-conference matchup against a strong St. John’s team. Butler was able to get some points in the standings with a 1-1 draw thanks to Katie Soderstrom’s game-tying goal in the 62nd minute. The women’s team stands at 9-1-1 and is 3-0-1 in Big East play.

Both the men’s and women’s cross country teams travelled to South Bend to compete in the Joe Piane Invitational. The men’s team had a very strong showing at the meet, placing third of the 23 teams participating. Barry Keane was Butler’s highest finisher, placing 10th in a very competitive field.

The women’s team also had a solid showing, placing 11th out of the 25 teams participating. Angelina Ellis was Butler’s highest finisher, placing 30th out of the 192 runners in the race.

Women’s volleyball also had two matches this week. On Oct. 1, the team defeated Georgetown on the road 3-1. Melody Davidson led the Dawgs with 18 kills, and Marissa McKelvey had a team high 47 assists. They turned around and played at Villanova the following day, but lost 3-0.

Butler football hosted Drake in a home game Saturday afternoon in the battle of the Bulldogs. The Dawgs fell to Drake 6-3 in an extremely low scoring affair. Poor weather conditions including heavy rain and strong wind did no favor to either team’s offense.

Butler led 3-0 at halftime, but Drake was able to get on the board with a 4-yard touchdown run followed by a missed extra point. Butler had a chance to retake the lead late in the third quarter, but quarterback Nick Orlando fumbled at the goal line and Drake recovered.

Butler had several more chances to even the score or take the lead, but was unable to get anything going and Drake was eventually able to run out the clock.

Both the men’s and women’s golf teams participated in invitational tournaments this week.

Men’s golf kicked off the week in Des Moines, Iowa by participating in the Zach Johnson Invitational, hosted by Drake University. The Dawgs had a decent showing at the tournament, tying for ninth out of the 15 teams total.

Then the men’s golf team traveled to Cleveland, Ohio for the Tom Tontimonia Invitational, which was hosted by Cleveland State. Butler tied for eighth out of the 15 teams total.

Women’s golf competed in the Butler Fall Invitational, which took place at Highland Golf Club. The Dawgs had a very strong showing at the invitational, finishing third of the 14 total teams.

Ally Ross of Butler had an extremely impressive showing, finishing 3rd overall in the tournament.