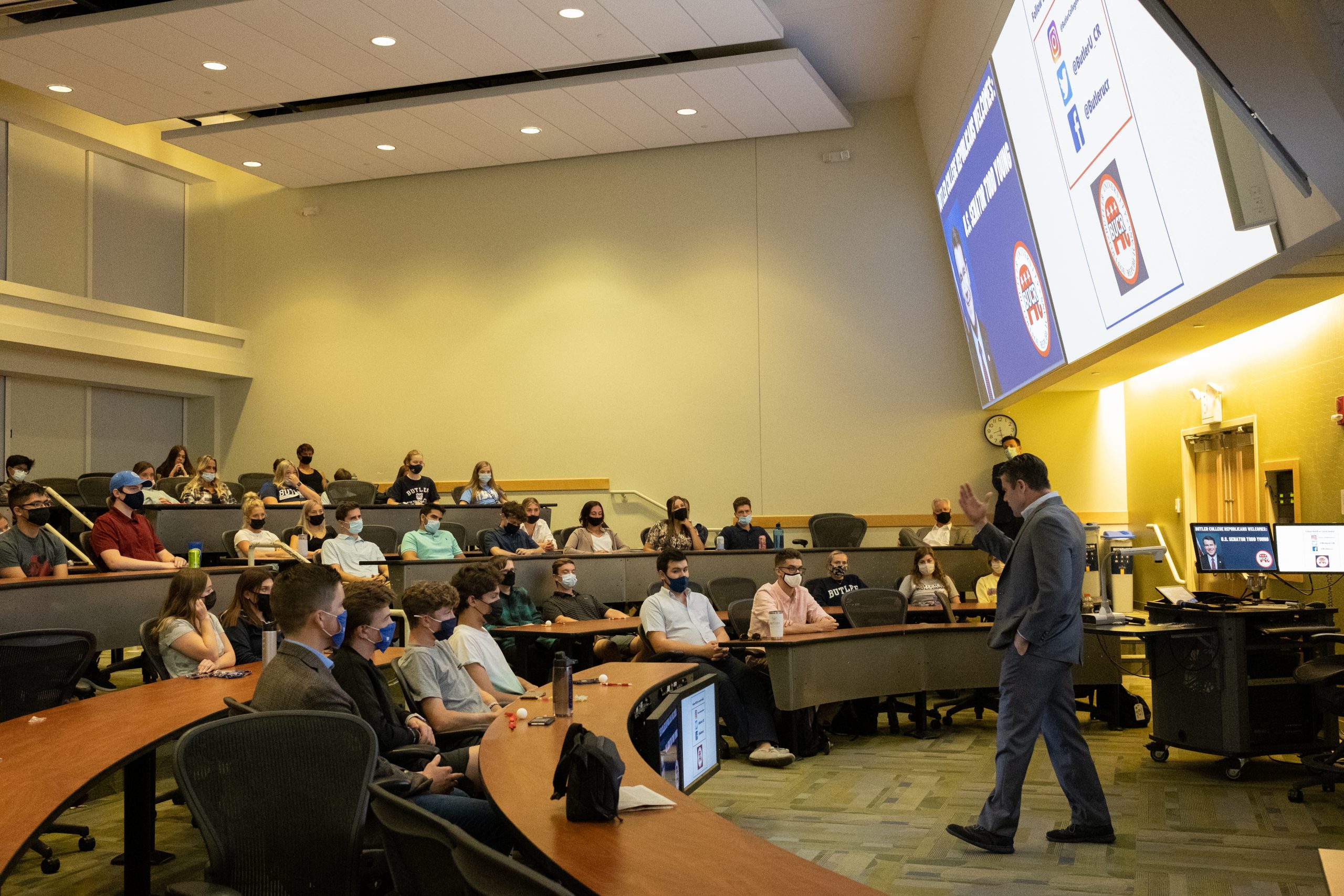 Senator Todd Young talking to Butler University College Republicans. Earlier in the week, the senator had met with student Republican groups from other universities around Indiana. Photo by Julian Cirnigliaro.

Butler University College Republicans, BUCR, welcomed United States Senator Todd Young to campus this past Wednesday, Sept. 8, to host the organization’s first callout meeting of the year. An email sent to all political science majors about the event stated that the meeting was Young’s first time on Butler’s campus.

After graduating from Carmel High School, Young enlisted in the U.S. Navy.

Young said his goal when coming to campus was to encourage young people to vote and to make their voices heard.

After being asked by a student in the audience what his advice would be for Republicans now, he advised them to be encouraging, cheerful, optimistic and empathetic. He explained that being in office is not always glamorous and that it takes a lot of sacrifice.

“I liked how [Young] spoke on the traditions of our country while opening his eyes to a future where compromise can be made within both polarized parties,” Rashevich said. “He understands the importance of tradition all while keeping the Hoosier spirit alive.”

Young shared insights about being a Senator and how it has impacted his life as well as his family. Young encouraged young people to continue being informed about what is happening in the world today, such as the tragedies in the Middle East and Hurricane Ida.

Manuel Alarcon Nava, junior multilingual studies major and president of the Butler University College Democrats, BUCD, was interested in sharing his thoughts on Young coming to campus but did not attend the BUCR callout meeting.

“I think that the lack of opposition from us says it all,” Alarcon Nava said. “We viewed him coming to their callout meeting as an opportunity for students, and we are in no position to deny students resources…we want to work hard to cultivate a community and environment where we can dissent and express how we feel; that is politics, it is about listening and letting others speak.”

Alarcon Nava said he is unaware of what Young said during the callout meeting, but emphasized that he is against any hateful or discriminatory language.

Vance Erwin, sophomore political science, international studies and Spanish triple major and executive member of the BUCR, helped host the callout meeting and said he was excited for Young to come to campus.

“Bringing Senator Young to campus was a great opportunity not only for those of us in BUCR but for the campus in its entirety,” Erwin said. “Giving students the opportunity to hear from a U.S. Senator is a special privilege.”

Another Butler student that attended the event was first-year strategic communications major Abby Hoehn. Hoehn is a member of the BUCD but was still interested in attending the event.

“I wanted to go and hear Senator Todd Young speak to hear the opposing viewpoint,” Hoehn said. “Hearing everyone’s view is valuable to me, and I gained new insight into the world of politics by attending. I also enjoyed getting a firsthand look into how government works and appreciated the comments made about bringing our divided country together.”