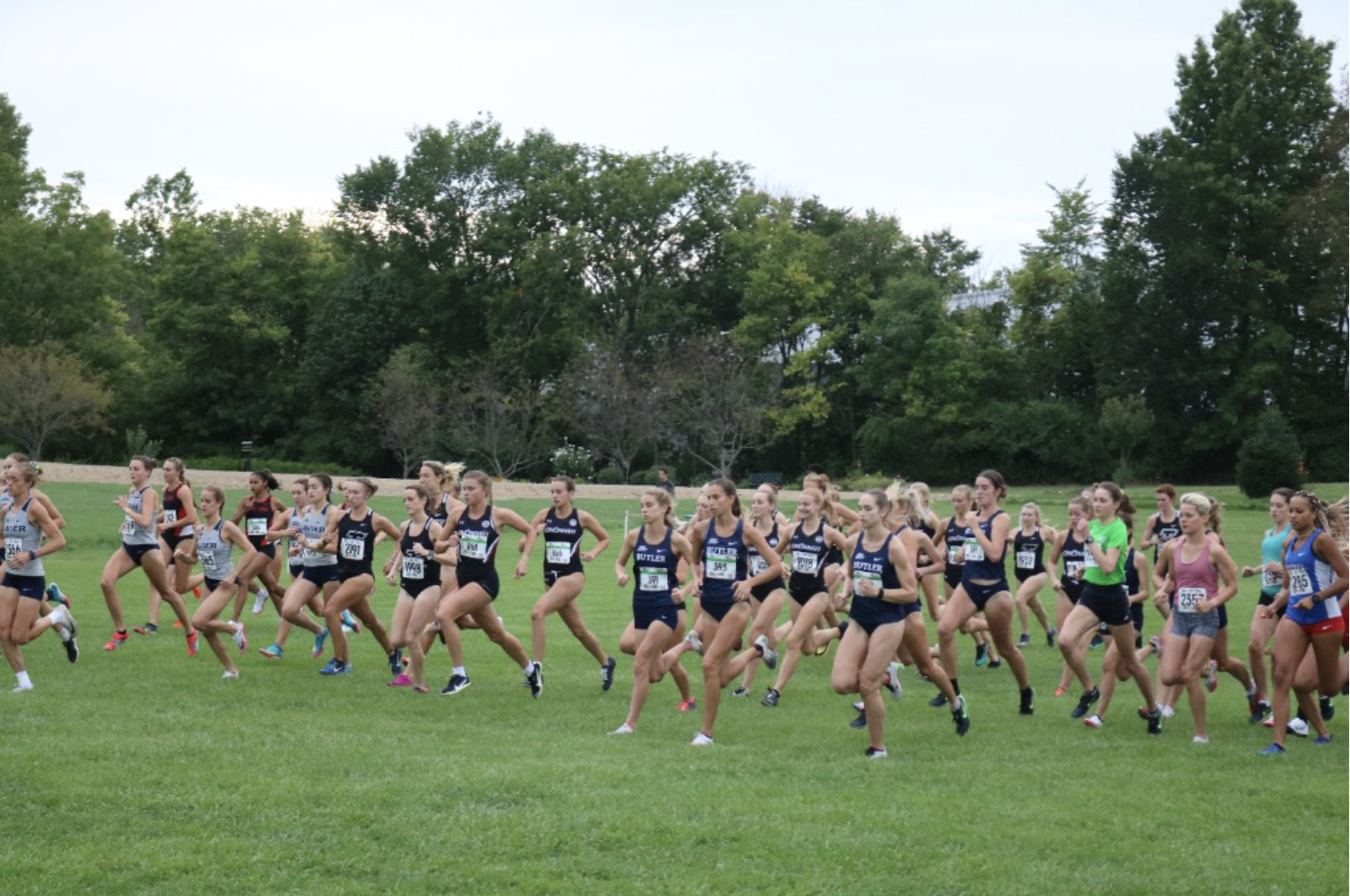 Butler women’s cross country racing from the starting line during their season opener at the Butler Twilight meet on Sept. 3. Photo courtesy of Butler Athletics.

The men’s soccer team (3-3-1) will head to Huntington, West Virginia to face Marshall (4-1-2). The team will be coming off of wins against Connecticut and Lipscomb, where they won 1-0 and 3-1, respectively. The game will begin at 5 p.m. EST.

Women’s soccer will play St. John’s in New York on Thursday. The team is now 9-1 as they have won nine consecutive games and 2-0 in the Big East. St. John’s is 5-2-1 overall, defeating the University of Connecticut 3-0 in their most recent matchup. The Bulldogs defeated Seton Hall on Sunday 3-1 to win their ninth straight. The game is scheduled to begin at 7 p.m. EST.

Both the men’s and women’s cross country teams will head to South Bend, Indiana to compete in the Joe Piane Individual at the Notre Dame Golf Course. This will be the men’s third meet of the season. They placed second out of six teams at the Butler Twilight meet and first out of six teams at the IUPUI Jaguar Classic. This will also be the women’s third meet as they placed first in both the Butler Twilight and the Jaguar Classic.

The volleyball team will travel to Washington, D.C. to square-off against Georgetown for a Big East match. The Bulldogs are 7-8 overall with a 1-1 record in the Big East. They are coming off of a sweep over Providence which snapped a four game losing streak. The first serve will be at 5 p.m. EST.

The volleyball team will face Villanova in Pennsylvania for a competitive Big East match-up. The Wildcats have a 8-6 record overall and are 0-2 in conference play. The game will begin at 7 p.m. EST.

The football team will face off against Drake this weekend at the Bud and Jackie Sellick Bowl at 1 p.m. Last week, the team fell to St. Thomas 0-36 in Minnesota. Drake is coming off of a 21-24 loss against Valparaiso.

The men’s soccer team will return home on Saturday to play Seton Hall at the Bud and Jackie Sellick Bowl. The game will kick off at 7 p.m. EST.

The women’s soccer team will return home to face The University of Connecticut who is 4-4 overall and 0-1 in their conference. The game will begin at 1 p.m. EST at the Sellick Bowl.

The women’s golf team will stay in Indianapolis to compete at Highland Golf Club for the Butler Fall Invitational Oct. 4-5. This will be the third competition for the Bulldogs. The team previously placed fourth out of 16 at the Redbird Invitational and fifth out of 16 teams at the Cardinal Classic in September.