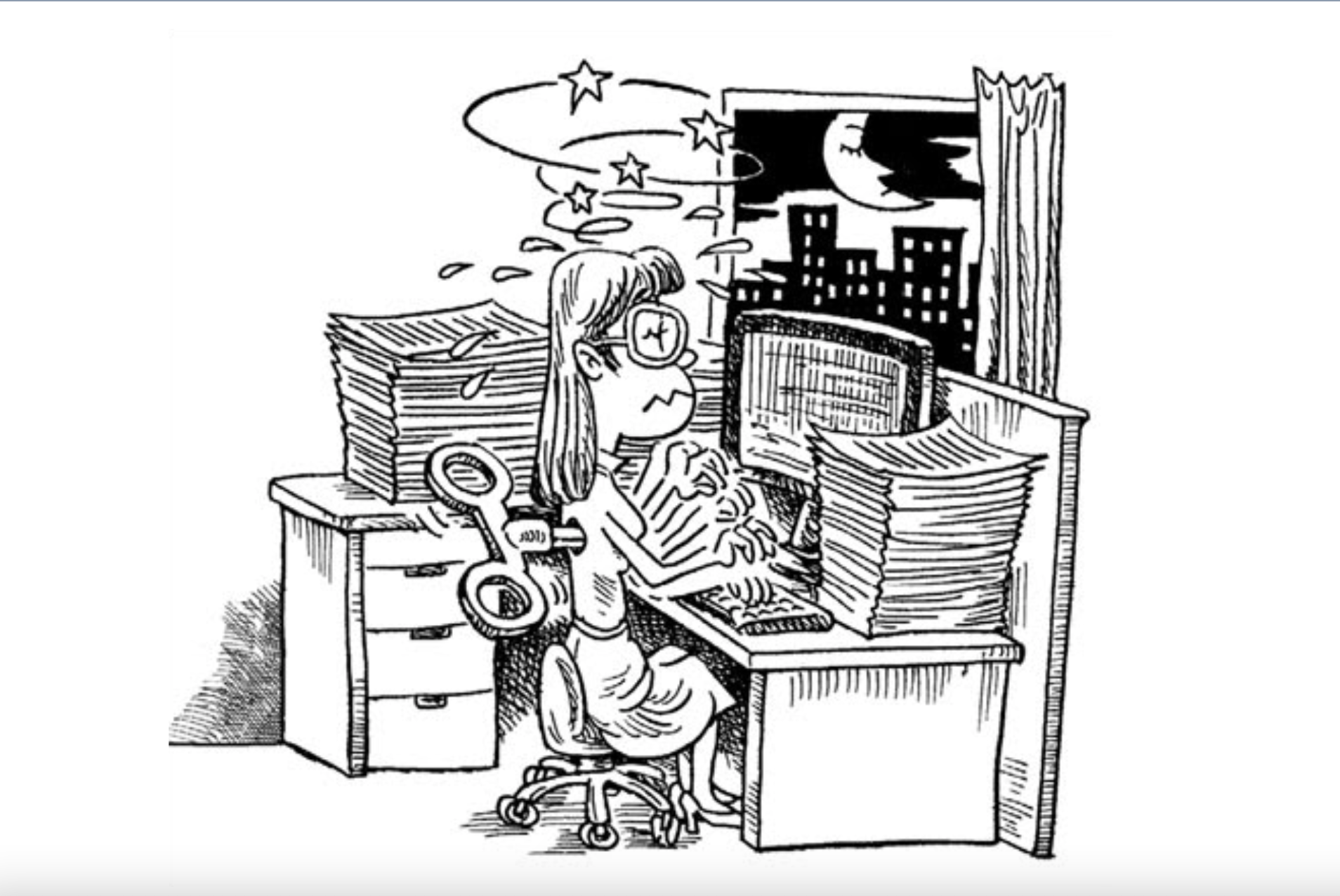 A more comical representation of an overworked woman. Graphic from China Daily.

This past year, several high-profile staff members on Butler University’s campus have left. The emerging trend seems to be that women of color in high-level positions have been leaving Butler for jobs elsewhere. The three most prominent resignations — Gina Forrest, Rhonda Jackson and Asia Hudson — all worked in Student Affairs in some aspect.

Forrest ran the Diversity Center, Diversity, Equity and Inclusion Board, and other DEI initiatives on campus. She was originally the interim director, having started in February 2019 before accepting the position full time in May 2019.

Jackson stepped up in March of 2020 — at the beginning of the COVID-19 pandemic — to become the interim director of Health Services. Prior to accepting the position, she had been working for Butler Health Services for six years as both a clinical nurse and clinical nurse shift coordinator.

Hudson became an assistant director in the Student Involvement and Leadership office in 2020. Her job primarily consisted of helping student groups and advising different boards, such as programming for Butler’s Student Government Association.

Students said the reasoning provided to them for the three departures were either vague announcements from their respective departments or unofficial reasons stated by the individual leaving to students they were close with. Either way, their departments have suffered from their resignations; for example, students have noticed less communication from Health Services.

Amanda Weiderman, a fourth-year mechanical engineering and economics major, has worked for Butler’s Health and Recreation Complex since her first year. She noticed trends regarding faculty and staff suddenly leaving their positions this past summer. Because of this, she said the quality of Health Services has changed.

“Health Services, in my opinion, used to be more reliable,” Weiderman said. “I feel that over the past few years, the quality patient interaction and communication has declined.”

“With no faculty or staff there’s a problem,” Dixon said. “Who’s helping us? When can we just enjoy being students? Like it kind of hurts. We’re always stressed, we’re always struggling and we’re always at our wits end all the time. We have no support. So of course I feel like certain staff members do performative activism and want to get praised for it but no one wants to do the root cause analysis of why students are leaving, why faculty are leaving and why staff are leaving.”

In Jackson’s case, notification of her resignation was only sent to those pertinent to her position in the form of an email. Thus, many students were unaware that Jackson had left, as there was no official university announcement.

Scott Peden, executive director for student wellbeing, worked with Jackson for the past six years and wrote an email to Student Affairs staff on April 26, 2021 announcing her departure. The email stated she had left Butler to move to North Carolina to be closer to family. Besides informing staff, Peden also took time in the email to speak highly of Jackson and all her work she had done for the university as interim director of Health Services.

“Without being melodramatic, I am not sure where we would be without Rhonda’s leadership, strength and expertise.” Peden said in the email. “This past year… From waking at 7 am on a Saturday to catch up on contact tracing, to sleeping in a guest room on campus because she was uploading information past midnight, Rhonda went to extraordinary lengths to keep our community safe and most of her efforts will never be known outside herself and student or parent [involved].”

In Forrest’s case, student leaders in the Diversity Center said they were left with no official reasoning for her departure.

Dixon worked very closely with Forrest. She was part of the group of students that were privy to the email sent by Ross’s office and is one of the few students that have said they have some idea as to why Forrest left.

“I do not blame her for why she left, I respect her decision and think it was best for her,” Dixon said. “Also, I don’t think that if any other student of color was in her position, they would have stayed either. She was a scapegoat and was not protected properly. She used her powers to help students and certain people did not like or appreciate that.”

While the official reasoning behind these departures remains unclear, there seems to be one common theme that connects all these resignations together: they were all women of color who felt it was time to leave towards the end of — and right after — the conclusion of the spring semester of 2021.

I personally think, first and foremost, that the fact that Jackson, Forrest and Hudson are all women of color is more reflective upon our university than it is of them. I think it’s more likely that they are a byproduct of how Butler tends to treat their staff — both students, full-time staff and faculty alike — than anything else.

While Butler is a great school for a variety of reasons, there are still many ways in which Butler University needs to improve. One being that they need to appreciate the work and contributions staff and faculty produce for the university. This is especially true for the Student Affairs staff.

It seems to be the norm at Butler for staff members in Student Affairs roles to be extremely hardworking, but students have also noticed how exhausted some staff seem. Many of the spaces on campus that provide students with vital resources and skills are still understaffed and, therefore, are probably overworked.

Dixon has worked on campus since her first year. She’s noticed significant trends centering on faculty, staff and students leaving on-campus jobs. She no longer works on-campus due to, in part, her treatment as a woman of color.

“I worked in two different areas and I left both areas,” Dixon said. “The first was due to Covid and the second was just not working out for various reasons. One [reason] due to sexual harassment, one due to not being taken seriously, especially being looked down upon as a person of color in an area with primarily white men.”

I could see these departures as perhaps a byproduct of the pandemic from people reevaluating their jobs and what makes them happy. However, I suspect that this is something that has plagued the university from far before the pandemic based on conversations I’ve had with faculty and staff members that have since left Butler. Maybe it’s not a coincidence that Thalia Anguiano, former assistant director in the Diversity Center, also left the university within the first year she was hired.

So in sum, three women of color — Jackson, Forrest and Hudson — who worked in Student Affairs resigned from their positions.

In their wake, their departments have been left understaffed and overworked. Was that their fault? No, but the university should have been more proactive in hiring replacements for their roles.

Dixon has given some thought as to what she thinks is the root issue Butler faces regarding keeping staff, faculty and student employees, as well as preventing an undue burden on students.

“There’s no point in hiring if people are just going to leave,” Dixon said. “I’ve been cc’d and bcc’d on so many emails from black faculty and staff members who have tried to make strides and tried to address concerns with higher up administrators and watched them…be ignored. There’s no point in bringing faculty and staff here if they’re just going to f*cking leave.”

“Until, I think, Butler is ready to set up a proper safety net, support group and DEI initiatives to keep black faculty and staff here,” Dixon said. “You’re not going to keep black students here because until they feel they have a support system…they’re paying for their education and they’re not getting it. Faculty and staff that are paid by the university aren’t getting it. We’re just in an endless loop.”

Frankly, I completely agree with Dixon.