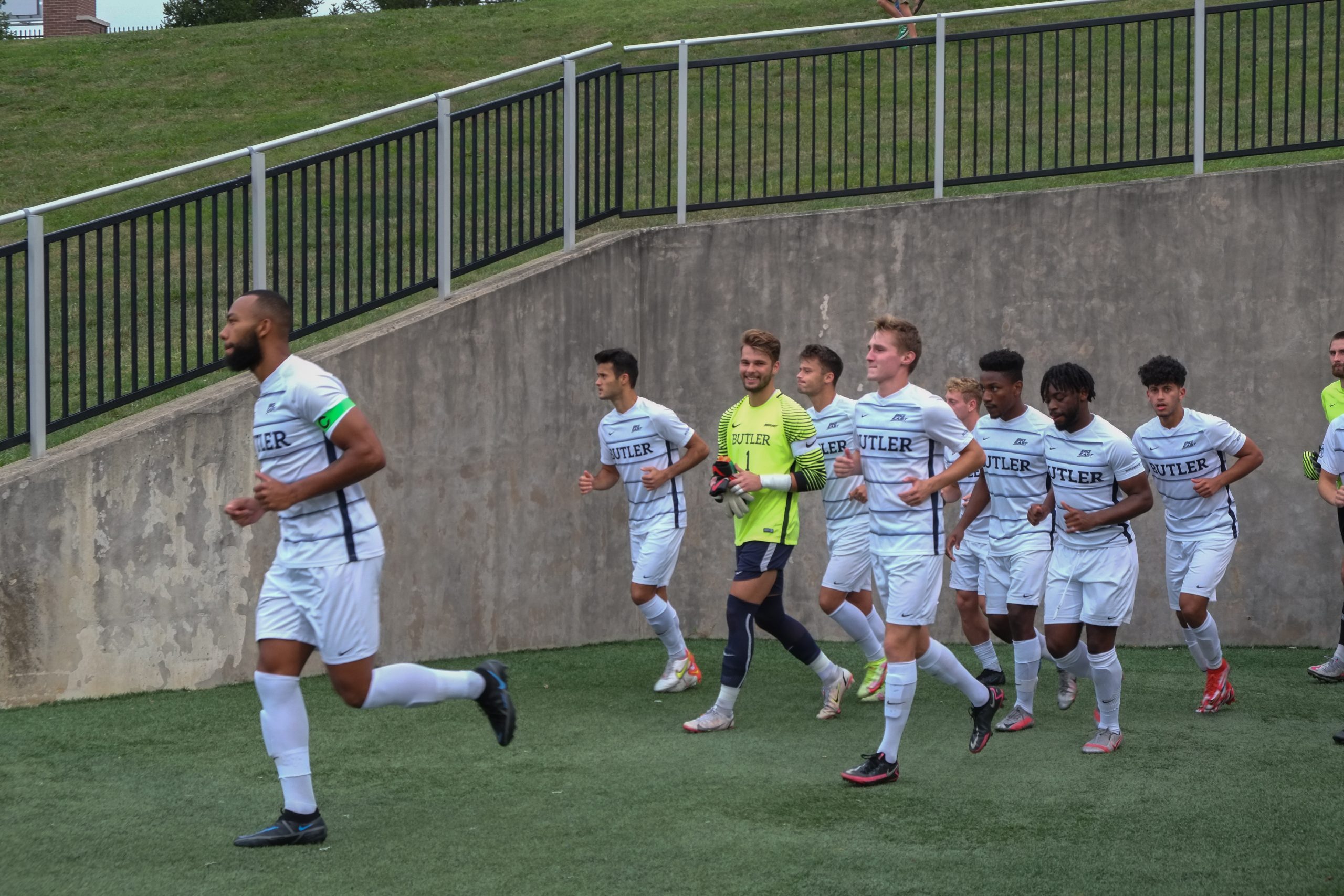 Butler men’s soccer running out of the tunnel into the Sellick Bowl during their matchup against the UW-Milwaukee Panthers on Sept. 3. Photo by Julian Cirnigliaro.

In their first normal season in over a year, Butler’s men’s soccer team will be looking to make a deep postseason run. The Bulldogs finished an abbreviated spring season last year with a 4-6-2 record, but the results did not tell the full story.

This season’s team returns much of the core that played in the spring. There have been flashes of excellence as well as rough patches to start the fall season. The team currently sits at 1-2-1 after their first four games.

The coaching staff, led by head coach Paul Snape, also returns. Snape will be coaching in his 11th season at Butler. Coach Snape has led the Bulldogs to three NCAA tournament berths in the last five seasons.

Returning to a normal season has brought a shared sense of excitement to the team. Senior midfielder Jack Haywood acknowledged such optimism.

“I think we definitely realize how much soccer has meant to us all,” Haywood said. “It’s not just a job to play for Butler, we actually enjoy doing it and it’s something that we look forward to doing.”

In the back, senior goalkeeper Gabriel Gjjergji will be playing his third season with defenders junior Perrin Barnes, redshirt senior Rhys Myers, and senior Griffin DeBolt in front of him. Barnes’ elite speed alongside Myers’ strength, and DeBolt’s composure combine for great building blocks for a talented roster looking to put all the pieces together.

The Butler defense recently held a number one ranked Indiana to just one goal, which came off a set piece.

As a redshirt senior, Myers is joined by junior forward Wilmer Cabrera Jr. on the Men’s Soccer preseason All-Big East team. In the same preseason poll, the Bulldogs were selected to finish seventh out of the 11 Big East teams.

“It’s nice that the coaches selected me to be a part of that team, but I just want to keep doing well in games and you know, prove that their choice was the right one,” Cabrera Jr. said.

The biggest question mark for Butler is the team’s goal scoring ability. Redshirt sophomore Tommy Visser and Cabrera Jr. will lead the attack. Visser has a strong left foot and a quick first step while Cabrera Jr. is capable of making the difficult look easy. Haywood also plays a crucial role in the Butler attack as he can make any pass that is needed to provide the forwards with chances.

The Bulldogs also added a talented group of freshmen this season, four of which came over from Europe.

In the Midfield, Philip Halvorsen, from Norway, and Quint Breitkruez, from Germany, have seen big minutes to start the season. Forwards Nick Okoro and Henri Kumwenda, both from England, have also played key roles. Coach Snape said their experience playing overseas at a high level prepared them for the college game and has allowed them to step right into the team.

“They’ve been exposed to a high level, you know, they’re good players,” Snape said. “They’ve played big minutes and they’re getting better and better every game”

Cabrera Jr. also commented on his role in leading the younger players in the attacking end of the field.

“I’m trying to encourage them to get the team in the best shape possible so that we can score goals and we can win,” Cabrera Jr. said.

It’s not a question of talent for the Bulldogs, but getting ten new freshmen to mesh in with an existing core will take time. If the team can put all the pieces together, then they have the capability to make some noise.

“I truly believe once we start connecting, we’re going to be right there going for the Big East championship,” Snape said.

Butler’s next home game is a Big East affair with Connecticut at the Sellick Bowl on Sept. 18.