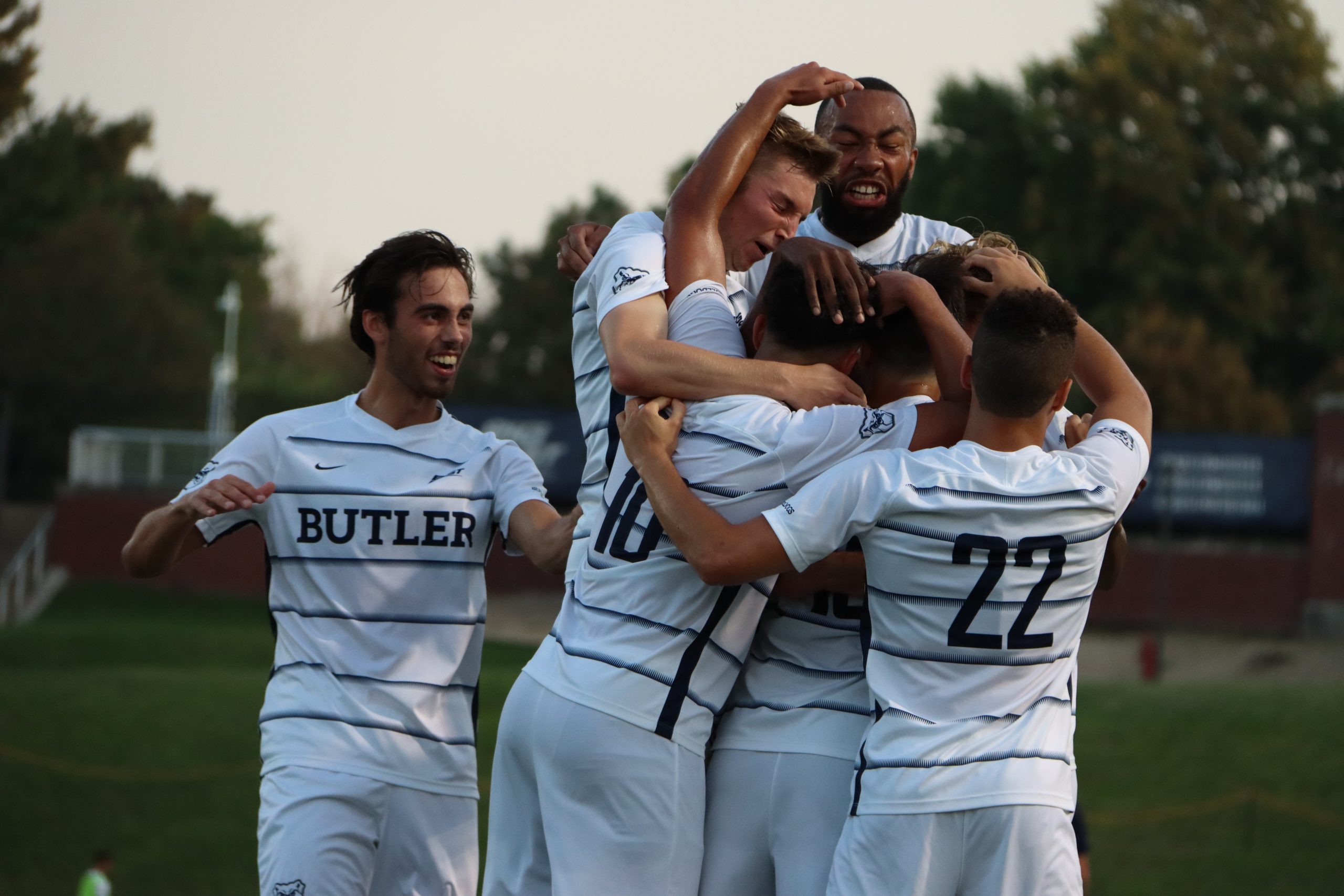 Butler men’s soccer players celebrating after scoring a goal during their matchup against the UConn Huskies on Sept. 18. Photo by Francie Wilson.

Butler men’s soccer team defeated #18 Lipscomb in the Sellick Bowl on Tuesday night. The Bulldogs are 3-3-1 on the season after the 3-1 win over the Bisons. Butler handed Lipscomb their first loss as they move to 5-1-2.

Butler started the game quickly, maintaining much of the possession and setting the tone for the night. Redshirt junior midfielder Jack Streberger started off the scoring in the 14th minute.

The play started with senior midfielder Rico Hollenkamp — who quickly took a free kick from Butler’s own defensive half — and caught the Bisons defense off guard. Streberger settled Hollenkamp’s long pass and dispatched a shot from the left side of the 18-yard box which deflected off the Lipscomb defender, steering it over the goalkeeper’s head and into the top corner.

Butler continued applying pressure throughout the first half and managed to double their lead. Streberger was involved again, as he managed to steal the ball from a Lipscomb defender in the Bisons own 18-yard box. Streberger found his teammate, junior forward Wilmer Cabrera Jr., who slotted the ball into the net for his third goal of the season.

Despite giving up the goal, Butler’s head coach Paul Snape was proud of the way his team performed in the first half.

“I thought our boys had the right frame of mind — they knew they’re playing against a really good opponent and I thought we started really well today,” Snape said postgame. “When they scored I think the momentum went a little bit against us but we showed some grit to get in at two to one.”

Butler impressed again in the second half and sealed the win with a goal in the 78th minute from the captain and graduate student midfielder Joel Harvey. Streberger was once again the catalyst as he drove with the ball and then layed it off to Harvey who beat the goalie with a low shot into the bottom right corner.

Streberger was the star of the game with a goal and two assists. Snape praised the midfielder’s impactful performance.

Butler logged 19 shots and held Lipscomb to 10 shots. This impressive performance came with their captain and redshirt senior Rhys Myers out due to sickness. Coach Snape was proud of the way his defense stepped up in the absence of one of their centerpieces.

“Not having Rhys, who’s without a doubt one of the best center backs in the country is difficult but this is a squad game — next guy up,” Snape said. “We did it in the years before, when we’ve been successful and the next guy went up and today I thought the defense held real tight.”

Snape said the team will enjoy the win but will shift their focus on to their next matchup.

“I think that we have to go back, watch some video and see how we can be better,” Snape said. “We’re enjoying tonight but tomorrow morning it’s all about Villanova.”

The Bulldogs travel to Philadelphia, Penn. on Saturday to face the Wildcats in Big East play.