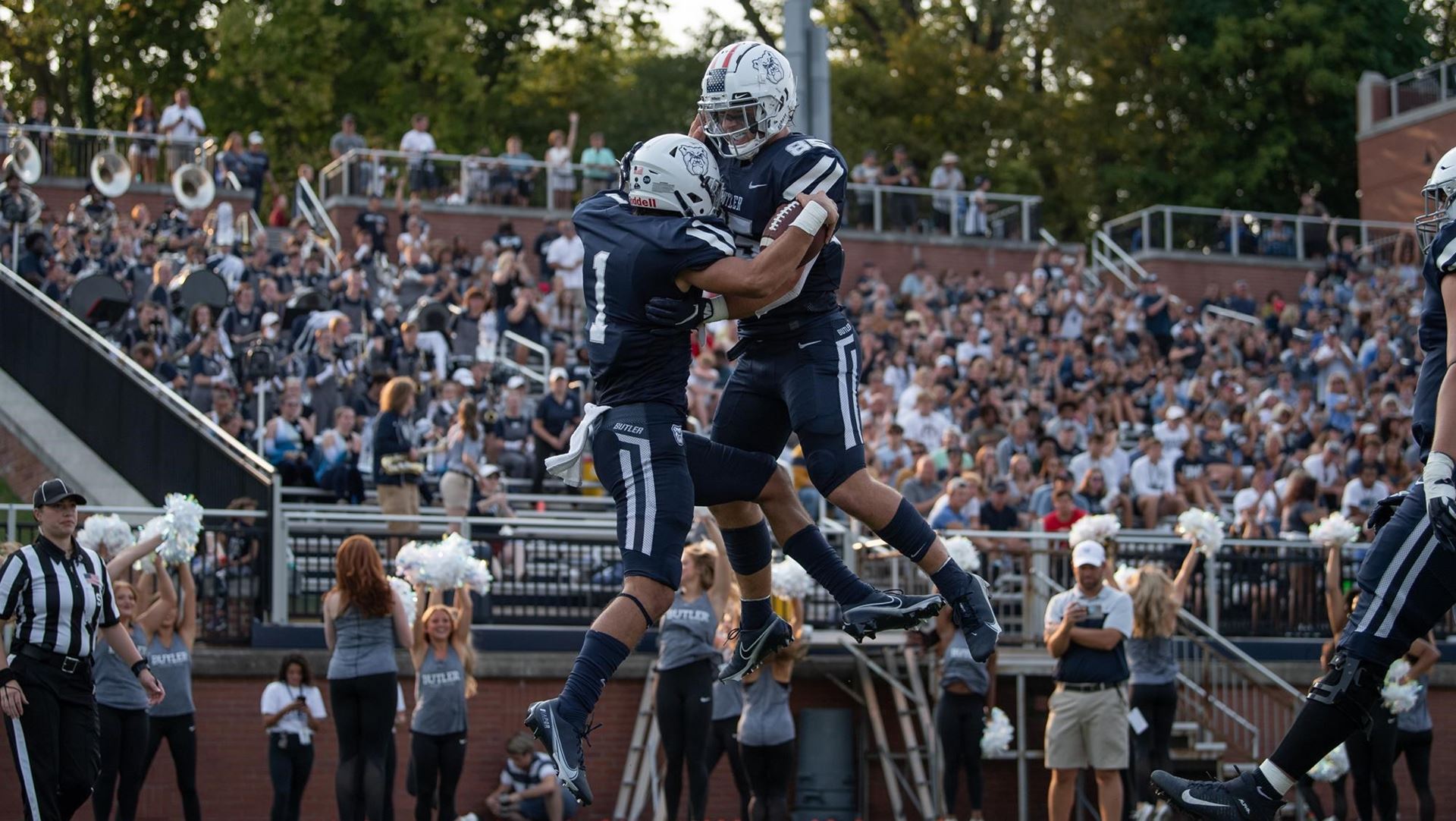 Quarterback Nick Orlando and tight end Jared Suchevits meet midair in the end zone following a touchdown during Butler’s 49-24 win over the DePauw Tigers on homecoming. Photo courtesy of butlersports.com.

The Butler football team defeated the Taylor Trojans 77-24 on Sept. 18, improving to 2-1 and breaking a team record for points scored in a single-game.

The start of the game did not go well for the Bulldogs. On the opening drive, the Trojans started off strong as they picked up 74 yards on nine plays, capping the drive off with a 19-yard touchdown run from running back Brendan Lamb.

Their lead doubled to 14-0 after linebacker Josh Saltzgaber intercepted a Bulldog pass and ran it back 27 yards for a touchdown, giving the Trojans an early advantage just four minutes into the game.

About three minutes later, quarterback Bret Bushka hit wide receiver Yogi Flager for a catch and run covering 66-yards that would end in a touchdown, tying the score 14-14.

The first quarter ended with a 42-yard field goal from Zane Shilts, giving the Trojans a 17-14 lead.

Butler’s defense woke up in the second quarter forcing Taylor to punt on their first drive and forcing four-straight turnovers in Trojan territory, resulting in Butler taking over the ball game.

Running back Kavon Samuels helped Butler get their first lead of the night with a 22-yard touchdown run. Moments later, defensive lineman Daniel Obwaya would have his shining moment as the first-year recovered a fumble and scored.

Orlando and Samuels both scored rushing touchdowns following the fumble in the second quarter. The scoreboard read 49-17 after a five-yard touchdown pass from Bushka to wide receiver Johnny O’Shea for his first touchdown of the year.

The Trojans finally responded with a 1-yard touchdown rush from Lamb —  but that wasn’t enough to stop the Bulldogs. The score read 49-24 going into the half.

The second half was all Bulldogs as they dominated on both sides of the ball. Bushka found tight end Jared Suchevits in the back of the end zone from six-yards out for the first score of the half. Orlando then found an opportunity and raced past multiple Taylor defenders to give the Bulldogs a 63-24 lead at the end of the third.

Butler was on a roll and scored another 14 in the fourth quarter. Quarterback Brody Reder ran the ball into the endzone for seven yards and another Trojan fumble resulted in defensive back Kellen Madison recovering it and running it in for 11 yards for his first collegiate touchdown.

Butler – hoping to keep up with this momentum – will take on the St. Thomas Tommies on Sept. 25 at 1 p.m.