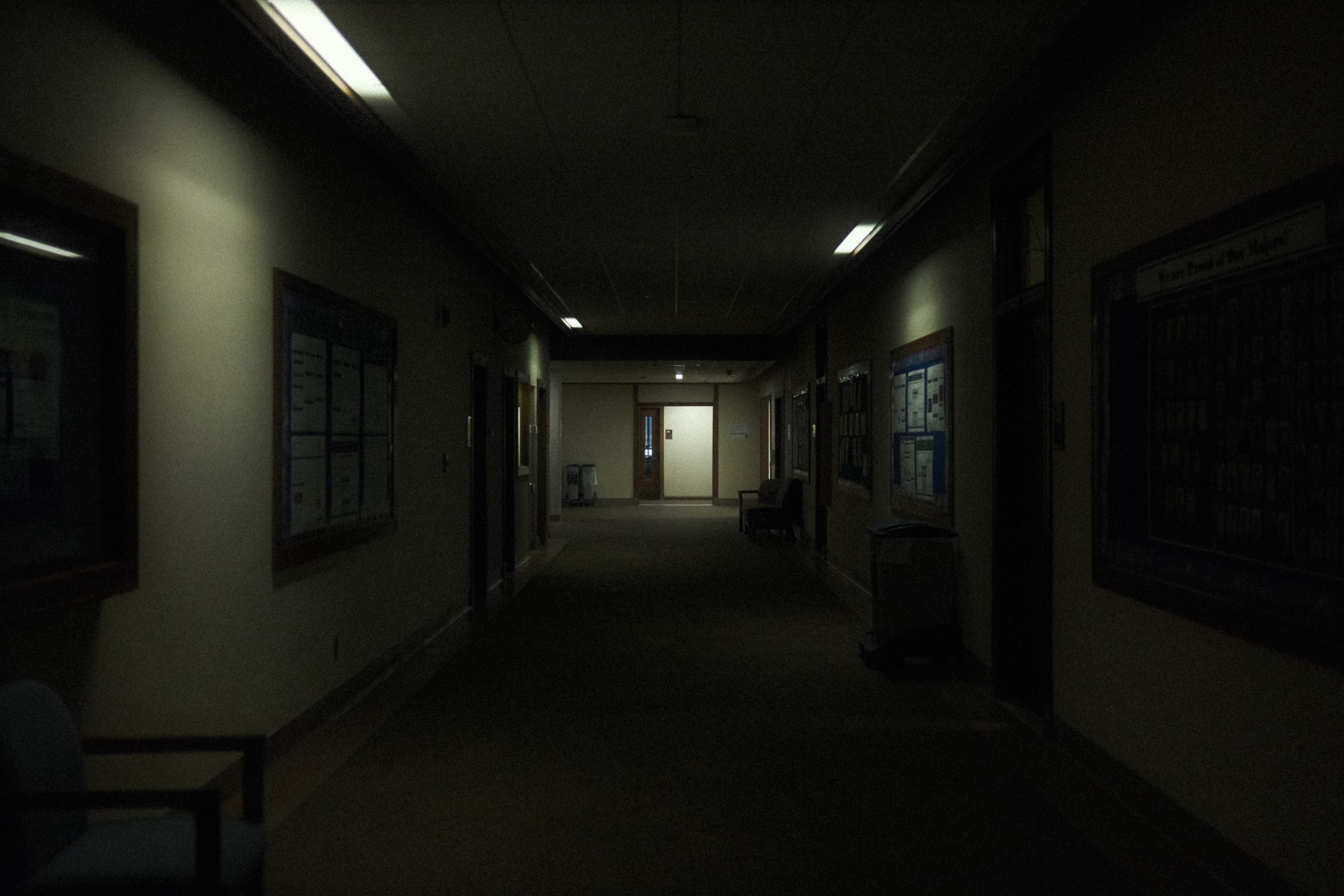 The Elevators of Gallahue – Gracie Elmer

Having used a scooter for most of my life, I have also needed to use an elevator in almost every building I go into. With so much experience using elevators, one would expect me to have a different take on the experience of riding in elevators.

When I first tried the elevator in Gallahue as a first year, it gave me chills to say the least. The elevator is box-shaped, and I pressed a button that juts out of the wall to make the door go down. Although, I guess it should have been a warning sign that the button looks just like an emergency button.

Once I pressed the button, a huge metal grate crashed down in front of me. The grate honestly made me wonder if I was about to go down into a mine or something. You know, like in “The Hunger Games?” Once the grate was in position, two huge white gates slammed together, and I had to keep my hand on the button to make the elevator even move. All the while, it creaked and crept along ever so slowly. When I finally reached my floor, the whole elevator shuddered. Better get out quickly!

Ah yes, good old Jordan Hall! During the day, the hallways are saturated with the sickening scent of mold, the sound of mysterious brown water dripping into buckets and the hordes of first-years twirling their lanyards with 20,000 keys.

As if Jordan is not anxiety-inducing enough in total daylight, at night it transforms into something reminiscent of a gothic dreamcore backroom. But, what are you and your roommates supposed to do at 11 p.m. when the only vending machine on campus that has Sour Patch Kids is in Jordan? You go get them.

The walk across campus is not too bad. It is walking into Jordan that makes you uneasy. The half-lit fluorescent lights buzzing, the echoes of your footsteps, the feeling that you are being watched, and — somehow — the mold smells worse.

There is a sense of urgency to get out, but it is a familiar feeling. You know when you are a kid and you are afraid to go downstairs in the dark so you turn on a light, get what you need, shut the light off and run back upstairs as fast as you possibly can? That is what it feels like.

There is something about liminal spaces that are so daunting, but the cool angelic glow of the vending machine filled with Sour Patch Kids is soothing. And they even have the blue ones!

From my personal experience — and I’m sure from the experience of many others — Gallahue has always been an odd and spooky place. Now that it’s juxtaposed with the brand new science building, it only looks even more dated and out of place.

Good news is the building is now being worked on. And while I’m sure it will end up looking much nicer than it did before, and compared to the state it is currently in, this under construction’ version of Gallahue is much worse than its previous ‘old, dingy, and slightly creepy’ variety.

I took the liberty of exploring the entire building once I learned it was under construction, and let me tell you, it is an entirely different beast. The added ambiance of a wall being removed on the first floor really set the mood.

The basement is a completely different type of horrifying. Rather than the unfinished floors, creaky pipes and yellowy-orange fluorescent lights, I was met with a much more industrial terror as the walls and ceiling were removed with everything stripped down to the metal beams, caution tape hung from the exposed pipes and a very ominous darkness shrouded the hallway that led to the mail center. The place was off limits, so I could only look on at the now unrecognizable basement and honestly, that was enough.

Gallahue, as it currently stands, is a spot on campus that is certainly reminiscent of another time and is undergoing an uncomfortable transformation. It’s only a matter of time before the plight that has taken root in the basement spreads to the whole building.

During the day, the walk to Holcomb Gardens feels incredibly refreshing because of the greenery and nature that surrounds you. As you meet the entrance, there is a calm, open view with the Persephone fountain placed at the end of the gardens for all to admire. At night, however, Holcomb has a completely different atmosphere. Like, straight out of a horror movie atmosphere.

Like many students, I thought it would be a fun idea to keep the Butler tradition going and go fountain hopping with my friends one night during my sophomore year. As we walked over, we realized just how little lighting there is on the walk. That alone made me feel spooked. I had to keep looking back to make sure nothing was lurking behind us, and I found myself feeling like I was seeing things in the trees surrounding us.

We finally made it to the entrance of Holcomb, making the disturbed feelings go away — for the moment, anyway. There were only streetlights at the entrance of the garden, so the farther we walked towards the Persephone Fountain, the darker it became. Once we reached the fountain, we had to use the flashlights on our phones to get a better view.

There is something very ominous about looking at a statue at night. It gave off the same feeling as being in a building after hours or a long, dimly lit hallway.

That being said, our fountain hopping experience was fairly short.

Oh the joys of freshman year, scouting out your future classrooms, experiencing welcome week and the accompanying anxiety and dealing with I-Lot parking. At a glance, I-Lot parking isn’t that bad. It isn’t the first choice for most students, but it’s pretty close to Irvington and you have a scenic stroll over the canal. However, after the sun sets, that scenic stroll turns into a bit of a nightmare.

Twigs snap, leaves rustle, there’s a flurry of movement in the shadows. Yes, it’s probably just a bird but it could be a murderer. The light post that stands guard, hoping to luminate any predator, casts harsh lighting that only creates a more ominous environment.

Coming back from another late-night Target run, there’s nothing to do but hope you get back to the dorm quickly and safely. As anxiety creeps in, my pace quickens. I’m sure speed walking will save me from whatever ominous creature lurks in the shadows. Suddenly, I’m sprinting up the I-Lot stairs, desperate to get to the top where there is a lot more light and less brush.

Not being a StairMaster champion, I had to stop to catch my breath before actually making it to the top of the stairs. Thankfully, this jerks me back to reality and I see the light. Many thanks to all the lamp posts that shine the way back to Irvington.