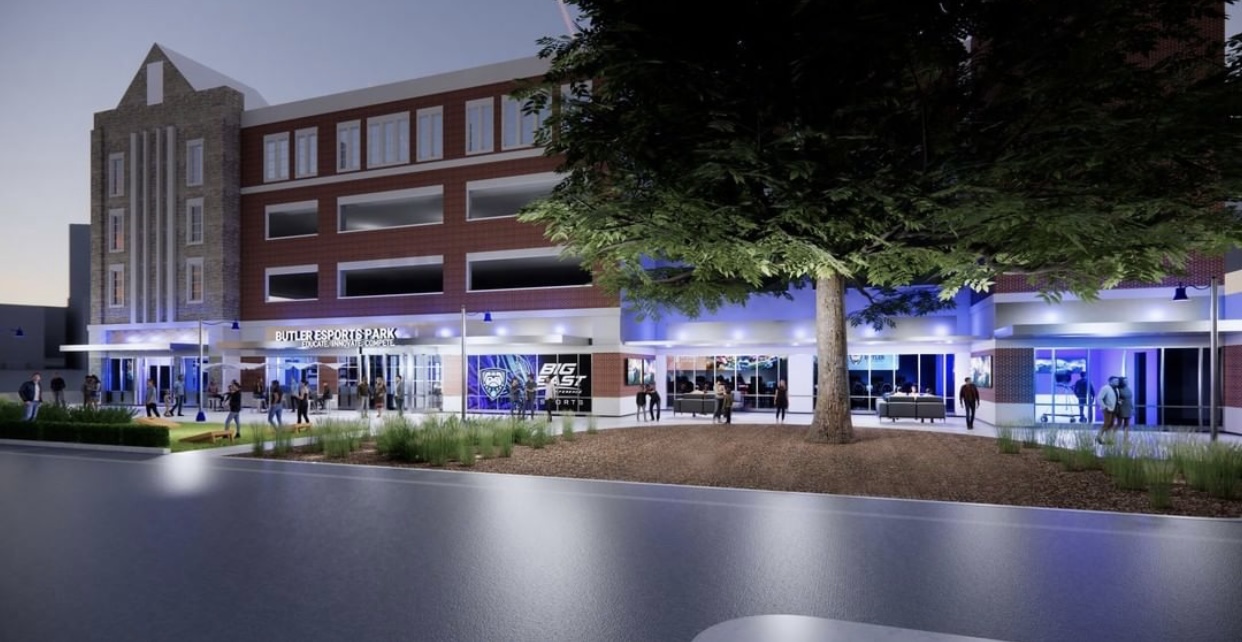 Butler University will welcome its latest addition to the campus in the fall of 2022 in the shape of a brand new 7,500 square-foot arena devoted to Esports and technology.

The multi-purpose indoor area located on the first floor of the Sunset Avenue parking garage, next to Chatham Tap, will be renamed “Butler Esports Park.” The venue will feature high-performance PC’s, numerous gaming consoles, more office spaces, a studio and a production room.

The plans were originally released in 2019, but the COVID-19 pandemic delayed the project until the fall of 2021. The university announced the beginning of construction just prior to the start of the fall semester.

This news has sparked interest around campus as students begin to get a first glimpse of how the new arena will look. Matthew Hafele, secretary for the Esports club, was one of those students who were very excited to check it out.

“Once I saw the renderings, it was mind-blowing to see all the upgrades and technology that was going into it,” Hafele said. “The fact that the arena is built for more than just for Esports could help cater to even the students who aren’t fans of video games.”

Despite Butler opening their first space dedicated to Esports on campus in 2019, the new complex will become the team’s new home once it’s complete.

Bryan Rogers, president of the Esports club, expressed his joy at the ability to move to a larger facility.

“Right now we’re in the basement of Atherton by Plum Market, but this new location will give us a place that you can’t miss,” Rogers said. “Hopefully this space will allow it so we can set up TVs outside to display events we’re doing to get more people engaged.”

The Butler Esports Park may entice some students to get involved in Esports—but also in the classroom.

This fall the Butler College of Communication will offer a new 18-credit hour program for an Esports Communication minor. This minor will teach students production, business, communication and marketing skills that could turn their passion into a career in the expanding competitive gaming industry.

Lee Farquhar, Interim Director of the School of Journalism & Creative Media and academic lead for the Butler Esports program, shared his aspiration for the new program.

“The minor will take a lot of people’s interest in gaming and tie in promotion, marketing and production skill sets that will help them be more marketable if they want to work in the Esports industry,” Farquhar said. “We’re already starting to see some students sign up for the Esports minor, and I’m excited to watch the numbers continue to grow.”

With the acceleration of interest and recognition in Esports technology and education, Butler’s push to join the forefront of the Esports facilities movement will certainly put the university on the map in the collegiate competitive gaming world.

“We want people to come to Butler for our Esports program,” Rogers said. “As the industry grows and as high schools start to develop teams, the new arena will put us ahead of the curve in order to be able to function like any other major sport.”