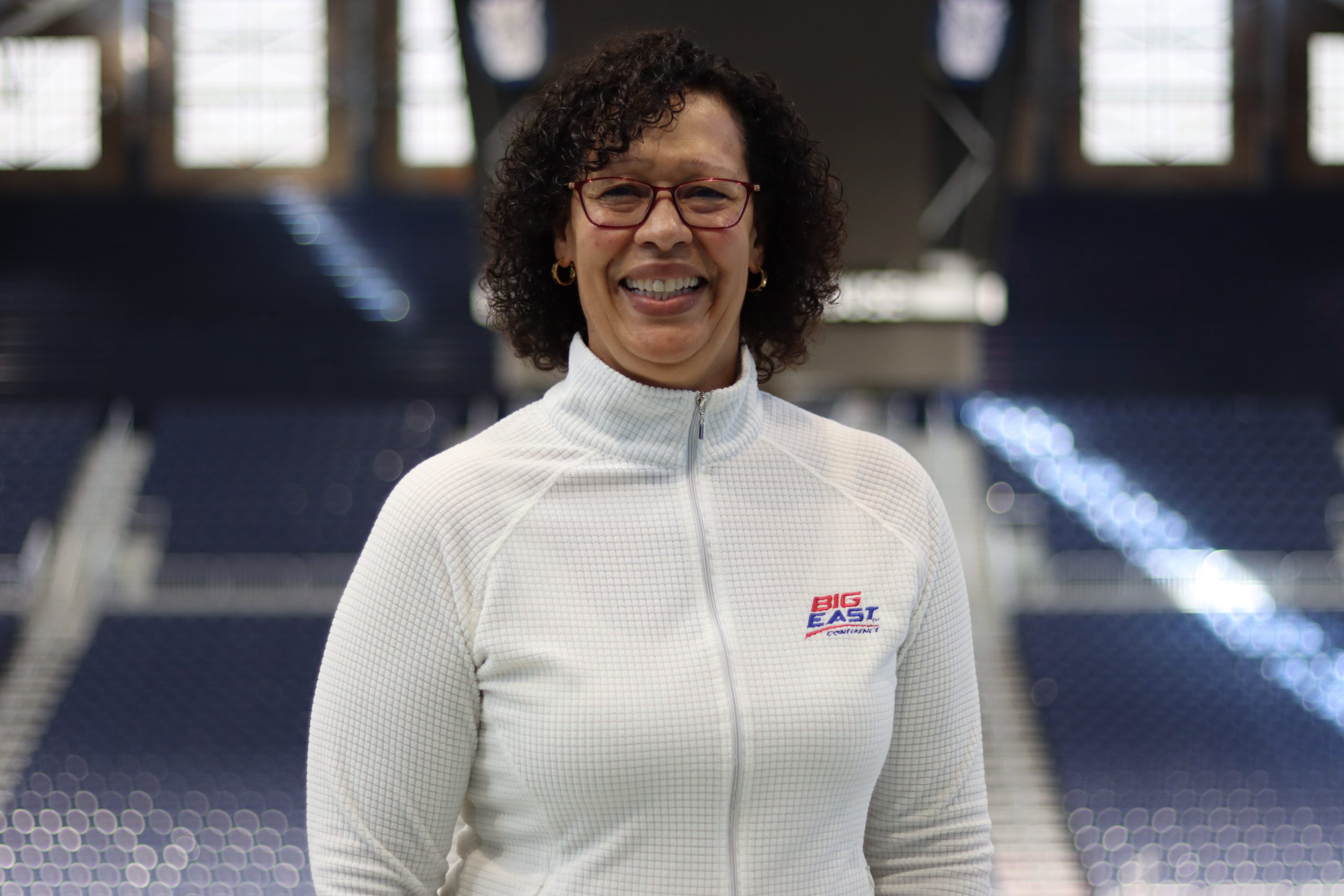 If you ask her, Sonya Hopkins’ life plan has been guided by a higher power. Though her path to Butler was winding, it was paved with doors that opened when she knocked. Despite challenges and uncertainties, Hopkins has spent almost 15 years working with Butler student-athletes in various capacities.

Sonya’s story is about paying it forward — because she was once the student who came close to graduation and was unclear in her next step.

Flash back to 1979. Sonya decided to attend Southern Illinois University-Carbondale, where she studied journalism and advertising. Since her father was from southern Illinois, attending college there helped her remain near family. She earned a scholarship to play volleyball at SIU Carbondale and played all four years.

When it came time to graduate, however, Sonya got to the point where she lacked confidence in what to do next. But then, her university volleyball coach asked if she had any interest in coaching. Sonya replied that she was willing to try, promptly enrolled in graduate school and became a graduate assistant to the volleyball program.

“And here’s the piece about me that I don’t necessarily speak openly about, but it is the very heart of my story,” Hopkins said. “And that is, I feel like I was being led by a higher power, without question.”

However, Hopkins found out that she and graduate school “didn’t mesh well together.” Just then, in her spring semester of grad school, the full-time assistant coach decided to leave.

She was starting to feel like grad school wasn’t for her — and a door opened.

Sonya took the job. She worked in an assistant capacity for six years and then accepted a head coach position at Kankakee Community College nearby. However, after one year there, she received a call to become the head coach at SIU Carbondale.

But for a few years, towards the end of her coaching career, Sonya felt an urge for change. It wasn’t a bad experience, Sonya said, it was just…time. She thought about what the next move might be, and thought it might be a service-oriented position. She took a survey at her church to find out what her spiritual gift is, and the results were clear. To this day, Sonya believes her spiritual gift is service.

Hopkins had a conversation with SIU Carbondale Athletics’ director of academics and shared she was interested in the academics side of things. She had no idea that a full-time position in the academics department opened earlier that week.

She learned about academic counseling, changing majors and hiring tutors. Then, she met Elliot Hopkins. If you ask him, it was love at first sight. If you ask her, she’s always a little guarded when first meeting people — but the love came soon enough.

They met in June. Got engaged in October. Were married the following July. The only problem: Elliot lived in Indianapolis.

Sonya decided to pack her bags and move to Indy, but she didn’t have a job. She decided to call Sharon Clark, Butler’s head volleyball coach, and say “I’m bored, I’ve never been unemployed before. Can I come to practice?”

At that practice, Sharon told her about an open position on the academics side of Butler athletics. She found out the next day that the position had been offered to two different people — neither of which had accepted.

“Did you hear me say higher power?” Sonya said.

She was officially hired on August 28, 2006 as Butler Athletics’ coordinator of academic support and has been at the university ever since.

She now serves as the associate athletic director of academics and helps student athletes throughout various aspects of their academic careers. She might advise an athlete on how to change a major, what classes they need to take to achieve progress in their degree. For the past eight years, she’s worked closely with Molly Sullivan, associate athletics director for administration, on things like student-athlete programming or compliance issues.

“Butler University is so fortunate to have Sonya,” Sullivan said. “Our student-athletes go to her because she is willing to help them in any way that she can, but she is also honest and upfront with them so they know exactly what the expectations are.”

Sonya likes to take a conversation-based approach, instead of directly telling a student what to do — especially when the conversation revolves around future careers.

That’s because she was once the student who got close to graduating and questioned what her future would look like. By nature of her position, Sonya is serving it forward.

Barry Collier, Athletic director at Butler, wrote to The Collegian that Sonya has a strength in motivating people, and that she knows when to have tough conversations with student-athletes.

Sonya also spearheads the BUnited initiative which launched on Juneteenth of 2020. The program aims to emphasize the importance of empathy, education and experience within the Athletics department.

“She has taken this overarching concept and helped to create tangible events and experiences that have impacted many within our department,” Collier wrote. “I think it is safe to say that every Bulldog student-athlete, coach and staff member who have come into contact with Sonya during her time at Butler have been positively impacted by their interactions with her,” Collier wrote.

During her almost 15 years at Butler, Sonya has witnessed many physical changes at the university: the parking garage, the trees along Sunset Avenue, new mortar between the bricks of Hinkle Fieldhouse. But to her, Butler hasn’t changed, it hasn’t lost “who we are.”

“I like who Butler is, we’re small but mighty,” Hopkins said.