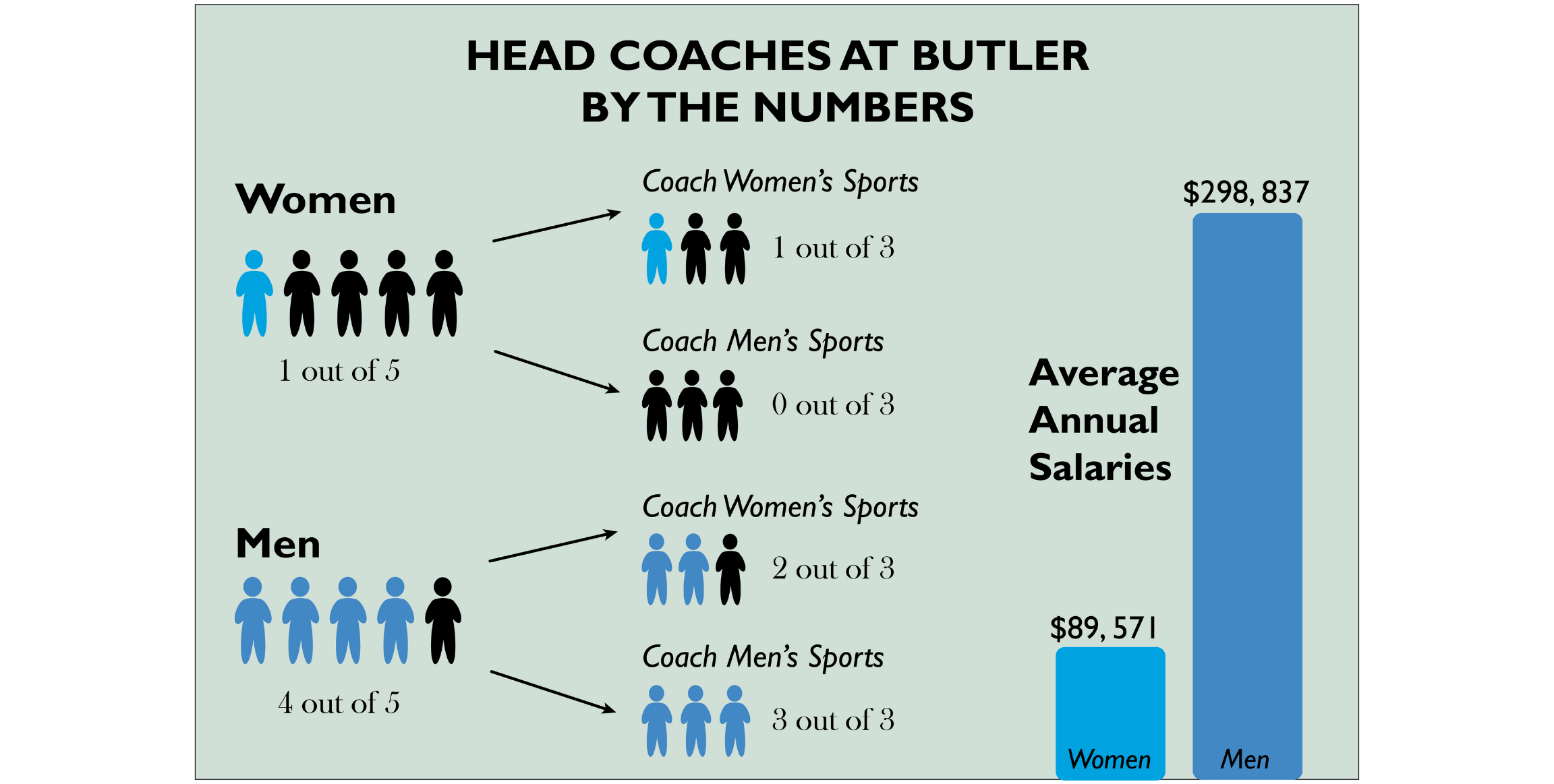 Female head coaches reflect on their experiences at Butler. Graphic by Janet Lovera.

Clark is the longest standing female head coach for Butler currently with the university. Even with her 12 winning seasons at Butler, the team’s 2010 NCAA tournament appearance and many other accomplishments, Clark said she is still not given the same recognition as other male head coaches on Butler’s campus.

When Clark was asked if she feels adequately respected and appreciated as a head coach on campus after 21 seasons in her position, she had one thing to say.

“No,” Clark said. “I would say no. I don’t want to make this sound personal because it’s not personal for me. I think that as a professional in this industry I think female coaches get overlooked constantly. Their contributions are rarely mentioned, if ever.”

Clark said that in regard to her time at the university, she is cognizant of all she has been able to achieve, even if not everyone else on campus is.

“I think in my 21 seasons I have contributed quite a bit to this department, but more than that, to the greater community at Butler and the greater campus,” Clark said. “And I wholeheartedly think that there are lots of people that know that and recognize that. And I’m not a person who seeks recognition, but I think it’s unfortunate that women that are in my position don’t get recognized for their contributions.”

This unequal pay is something that, in Clark’s opinion, is worse than bad.

“To say that it’s a disappointment would be a huge understatement,” Clark said. “I think that it’s unacceptable. I find it very unacceptable. And I find it even more unacceptable in spaces where it’s been promoted that we’re about inclusion and equity and all of those things. I think that makes it more hurtful. But at the end of the day I think we’re kidding ourselves if we think we’re something special and unique and different here at Butler.”

Cates, the head coach of the women’s golf team, said she wonders how the men’s basketball team impacts the average salaries.

“I think men’s basketball is always going to be a high profile position, they are making tons of money,” Cates said. “They are the ones who kind of butter the bread, so to speak, for the department as a whole. So I realize having a high profile coach in that position might skew it a little bit… I would like to see if we took out basketball, what it would look like then. I think it would probably be a little closer than it is.”

Cates said she understands that basketball brings in a large source of revenue for the school, and that Butler likely wouldn’t have a women’s golf program if not for the money that the men’s basketball team is able to bring.

The coach graduated from Butler in 2016 after playing three seasons on the golf team. Cates then worked as assistant coach of both the men and women’s golf team for three years with head coach Bill Mattingly. She was hired as the head coach of the women’s golf team in June 2019. When asked about if she experiences discrimination as a female head coach, she had one thing to say.

“No,” Cates said. “I have always felt super supported here at Butler, as a player and as a coach, especially now having been on the boys and the girls side as a coach. I knew the budgets for both, very similar, I knew kind of how Bill did things, there is no special treatment for guys or girls. He gave equal time to both programs, and yeah, I’ve never experienced any discrimination just becuase we’re the women’s program. And I still feel that way as the head coach for the women’s program.”

In thinking about the disproportionate number of male head coaches at Butler, for both men’s and women’s athletics, Oumou Toure, a sophomore on the Butler women’s basketball team, said the lack of representation can be disheartening.

Toure, who plans to graduate next year, said that she feels the higher up you move in the sporting world — and just in the world in general — the more male-dominated the environment becomes. She said that this can be harmful in many ways.

“It’s hard growing up as a little girl and not seeing anyone that looks like you in these positions of power,” Toure said. “The people that do the hiring are also white men, so they’re going to want to hire people that look like them. That’s just how that works. I know that I’m going to see that when I go out into the real world and get a job, that’s just how it’s going to be.”

Clark said that there is a certain sad irony to the situation for women in athletics today, specifically in regard to the lack of female head coaches.

“It’s always been okay for men to coach women’s teams, but yet men’s teams are never really opened up to women,” Clark said. “Honestly I think it’s one of the most illogical things allowed to happen in our society. The fact that women cannot be seen as capable, smart enough, experienced enough to coach men in the sport, yet men can be the authority for women… I think both [men and women] can coach both genders, but it’s so far out of whack that it’s laughable.”

Clark said that the whole situation is a complicated one, and that there are many female head coaches who have been able to make significant headway. She also noted that there are universities throughout the country who are doing it right and fairly compensating their female coaches. But, at the end of the day, she said most of the dynamics revolve around one thing: money.

“There’s no simplicity or complete right or wrong to it, but it is a business,” Clark said. “And people who want to believe that college sports are not a business, you literally have slept through the month of March. This is about dollars and about people making millions and millions of dollars. But it’s also about what’s right or wrong, and people need to use their platform when they have it available, to be inclusive. You can’t just use your platform when it’s beneficial to you or when it’s beneficial to one sex.”