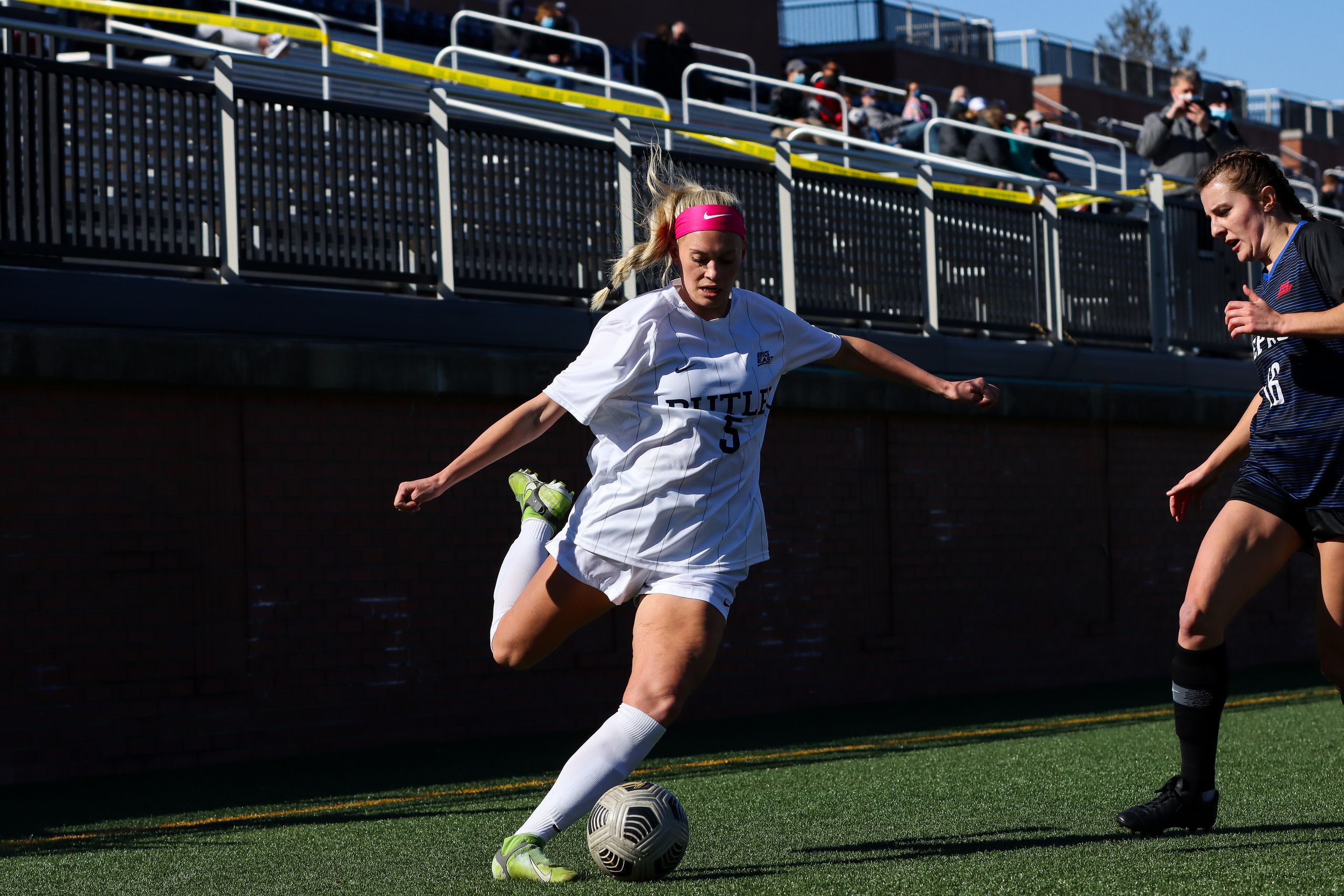 Amanda Kowalski fires a pass to the middle of the pitch in a game earlier this season. Photo by Chandler Hart.

One spring morning two years ago, Lexie Armstrong, then-sophomore defender on the women’s lacrosse team, walked to the weight room, as she normally would, to meet up with her coach to make up a lift.

When she walked in, she noticed there was another lift happening. It was a football practice, but she thought nothing of it. But then, she was instantly approached by an unrecognizable man.

“What are you doing here?” Armstrong remembers the man, who appeared to be a football coach, saying.

While his football team proceeded with their lift, the man pointed her to a smaller set of weights in the corner, even though there was plenty of other space available.

“Are you done using the weights?” Armstrong remembers a player coming up to her amidst her lifting session and saying.

Armstrong describes this idea of being a female athlete as “a constant displacement.”

“Because they always have to put someone else in front of the women,” Armstrong said. “I have to mentally prepare to be displaced and wait for things when the men do not.”

Armstrong is not alone. Women have been dealing with inequality in sports since they first started. They were finally allowed to be involved in sports starting in the late 1800s but were limited to specific sports like tennis and croquet. While the first men’s professional league started in 1871, the MLB, the first woman to play a professional sport was in the 1932 Olympics. While the female athletes have been integrated into the national sports realm since then, they are still treated unequally.

Sophomore Maria Guisti, a middle blocker on the Butler volleyball team, specifically remembers not seeing people who look like her represented in sports on TV growing up.

“I recognized more male athletes growing up because they portrayed more on TV and you hear the NBA and MLB, but you never hear the WNBA,” Guisti said. “The media does not do it justice and does not equally portray sports as they should.”

On March 20, 2021, pictures surfaced of the NCAA Women’s Basketball Tournament and the disparities set social media ablaze with thousands of people expressing their unsettling feelings toward what the NCAA did and how they need to fix the way they treat women athletes. Their weight room consisted of 12 barbells and a table of yoga mats whereas the men’s weight room, in comparison, had stations of benches, machines and free weights.

After a game the night before at a lacrosse tournament, Armstrong woke up in her hotel room and checked Instagram. At the breakfast buffet, Armstrong and her teammates shared collective displeasure about the NCAA’s mistreatment of its female athletes.

“It was unacceptable and a slap in the face,” Armstrong said. “Women’s sports have always come in second and have legitimized themselves and was so disrespectful and frustrating.”

“I feel like men and women have the same amount of pressure but men get noticed more for it,” Guisti said.

Tenley Dowell, a redshirt-freshmen on the Butler women’s basketball team, was equally as displeased.

“It’s very stereotypical to where men are supposed to be the ones working out and getting stronger and women don’t need to be as strong,” Dowell said. “But basketball is a very physical sport, so female athletes need to have access to weights rooms that will benefit them and help them succeed.”

But Dowell, like other female athletes, won’t give up.

“We are just looking to gain the respect that the men’s team gets,” Dowell said.