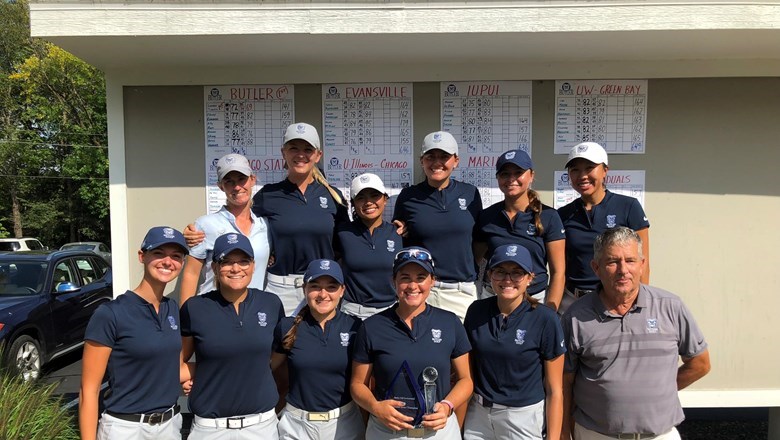 Christie Cates, the new head coach of the Butler women’s golf team, never thought she would be coaching at the collegiate level at such a young age.

The 26-year-old was named head coach in June after Butler decided to bring in a women’s head coach. Cates always thought she would go and work in accounting for a few years and then go back to school to get her teaching license. After graduating from Butler in 2016, she even had a job lined up at an accounting firm in town.

As a graduate assistant for the Bulldogs, she took the 150 credits to sit for the Certified Public Accountant exam, which she later passed.

Cates said she just wanted to help the then-head coach of both the men’s and women’s programs, Bill Mattingly, during her time as a graduate student. She didn’t expect to be leading the women’s team a few short years later.

Cates didn’t start playing golf until her freshman year of high school and didn’t begin playing in summer tournaments until her junior year. Her primary sport growing up was not golf, but basketball.

“Most people who know me from back then think of me as a basketball player, not as much as a golfer,” Cates said.

Cates began her college career at Franklin College, which is a smaller school about 45 minutes from Butler. After her first semester, Cates decided to transfer to Butler and play for Mattingly.

After walking onto the team her sophomore year, Cates improved her scoring average by almost four shots over three seasons. As a senior, she earned a scholarship and finished 15th individually at the 2016 Big East Championship.

Cates’ experience as a graduate assistant led her to consider a more permanent role with the team.

“I kind of talked with [Mattingly] about it to see if it was a possibility to have me as a full-time assistant, and so I did that for two years,” Cates said.

When the head coaching position opened, she applied and was named head coach in June 2019, making her the youngest head women’s golf coach in the Big East conference.

This year’s women’s golf roster is made up of 10 players who Cates said are a great group to be around. She feels she can relate to each player in a unique way.

“It’s important as a coach to be able to have a personal relationship and know their personality, which then will help me be a better coach because I know how to tailor my message to each player,” Cates said.

Having played college golf, Cates understands the mental side of the game and can share that knowledge with her players, including sophomore Claire Edwards.

“She’s organized, she loves what she’s doing, she’s a good player herself and she likes playing,” Mattingly said. “She’s earned the job.”

Having Mattingly’s support has helped Cates feel more comfortable in her transition.

“I’m super close with him, not just on a golf level but a personal level,” Cates said. “I consider him a good friend.”

Cates said she has always been good with people, and feels that coaching has really come naturally to her. Having graduated from Butler just three years ago, she understands what it’s like to be a student athlete at a rigorous school.

With her first tournament as head coach already under her belt, Cates is excited for what the rest of the season entails. Being able to stay in Indianapolis near family and coach at Butler, Cates couldn’t ask for anything better.

“I feel very fortunate to have my dream job at such a young age,” Cates said.