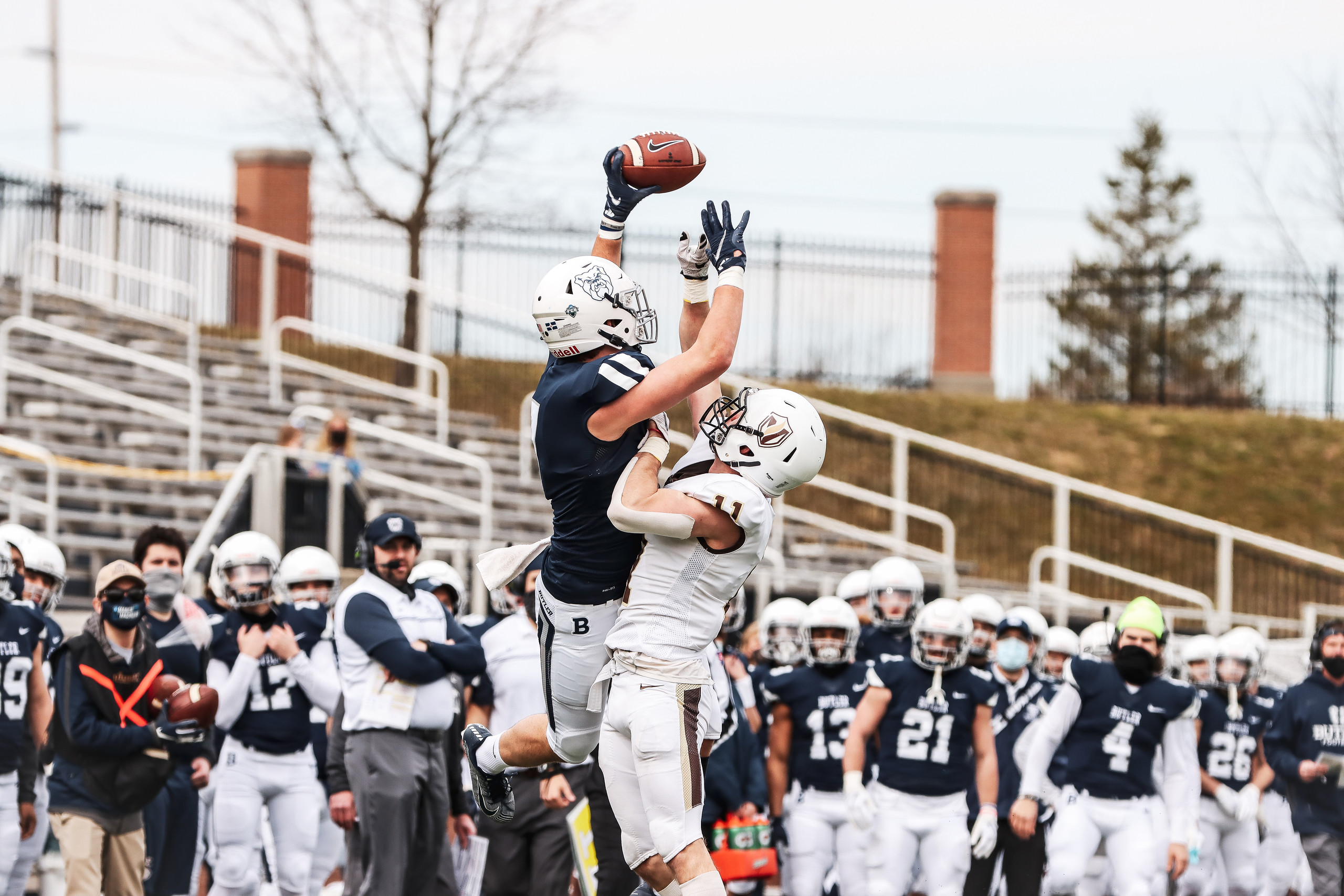 A Butler wide receiver skies for a contested catch in the Bulldogs’ season opener versus Valparaiso on March 13. The Butler football team failed to win a game in the spring season. Photo by Chandler Hart.

The Butler football team fell to Morehead State 28-18 in their second matchup of the season on April 17. The Bulldogs finish their spring season with an 0-6 record.

The matchup followed a similar script to their first meeting. The Eagles offense got out to an early lead in the first quarter.

Eagles quarterback Mark Pappas first hit receiver BJ Byrd deep for a 40-yard touchdown. Pappas followed it up later in the quarter by connecting with receiver Thomas Campbell-Clay for a 19-yard score, giving the Eagles a 14-0 lead.

The Bulldogs struck back in the second quarter with quarterback Sam Brown finding Yogi Flagger for a 5-yard touchdown. As time expired in the quarter, JJ Wadas hit a 21-yard field goal  for the ‘Dawgs, bringing the game to 14-10 at the half.

In the third quarter Pappas found Byrd again for a 3-yard touchdown, extending the Eagles lead to 21-10.

At the end of the third quarter, backup quarterback Nick Orlando connected with running back Kavon Samuels for a 42-yard touchdown. The ‘Dawgs proved successful on their two-point conversion with Orlando passing it to Sam Brown on a trick play, cutting the lead to 21-18.

With one second remaining in the third quarter, the Bulldogs kicked the ball off to Eagles and Byrd returned it 85-yards for a touchdown — making the game 28-18 heading into the final quarter.

Byrd finished the day with three receptions for 53-yards and three total touchdowns.

The Bulldogs failed to recover from their 10-point deficit as they turned the ball over twice and were shutout in the fourth quarter — giving the Eagles victory.

The Bulldogs complete their spring season without managing a single victory throughout their six game schedule. The ‘Dawgs are expected to return in the fall to play what will likely be a full PFL season.