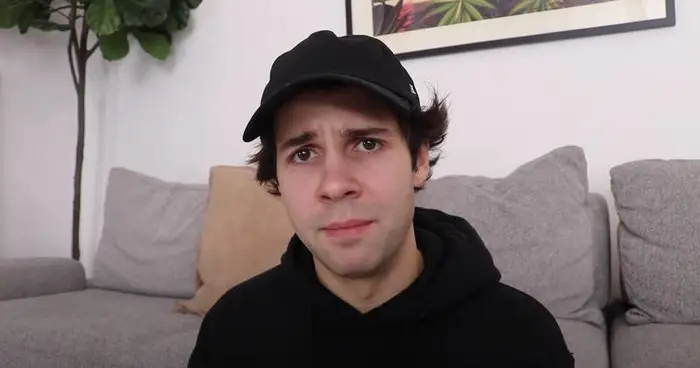 David Dobrik, a YouTube creator with over 18 million subscribers best known for forming the Vlog Squad, has recently been dropped by multiple sponsors and demonetized by YouTube. These repercussions followed rape allegations that were made against former Vlog Squad member Dominykas Zeglaitis, better known as Durte Dom. Other well-known YouTubers have spoken out against Dobrik and other members of the squad as well, including Pewdiepie and Trisha Paytas.

Dobrik rose to fame on Vine and eventually became popular on YouTube for his four-minute-and-20-second vlogs, which feature the rotating cast of characters that compose the Vlog Squad. The vlogs are composed of the highlights of Dobrik’s day, which range from pulling pranks to giving away cars, iPads and other various gifts.

These vlogs eventually became the source of Dobrik’s downfall, containing video footage of multiple situations in which he enabled and encouraged his friends and fans to take part in sexual activity without consent.

Insider broke their investigation into the allegations made against Dobrik and Zeglaitis on March 16, 2021. In the story, the pseudonym “Hannah” was used to refer to the college-aged woman who recently came forward to accuse Zeglaitis of rape in 2018. Hannah said that Zeglaitis encouraged her and her friends to drink enough alcohol, while she was underage, that she was unable to move or remember the night — let alone give consent.

According to the Insider article, Hannah said “her hope in sharing her accusations against Zeglaitis is partly that he and Dobrik and the other members of the Vlog Squad recognize her perspective of that night.”

However, the Insider article also called Paytas’ integrity into question, citing that certain fans do not believe she is a credible source because she once uploaded a TikTok where she claimed to have “crashed her car into Nash’s house while high on meth.”

Additionally, Dobrik received backlash for a 2017 vlog in which he pulled a prank that involved a non-consensual kiss between former Vlog Squad member JoSeth Francois and 47-year-old Jason Nash.

In the prank, Francois was misled to believe that he was going to be kissing Corinna Kopf, a 25-year-old YouTuber. The vlog was titled “HE THOUGHT HE WAS KISSING HER!! (SUPER CRINGEY)” and received over 10 million views before it was deleted.

Butler University student Lauren Koehring, a junior health sciences major, has been subscribed to Dobrik since she was in high school and said that to her, the news initially came as a shock.

“At first I didn’t want to believe it…” Koehring said. “[Dobrik] looks and seems like a very generous and nice guy, but the more that I thought about it and the more that I looked into the content of the vlogs, the more it made sense, because all of them act like they’re college kids. They goof around, and they sometimes do things without regard to how someone would feel about it. Some of the pranks that they would pull could be misconstrued or taken in a wrong way.”

Since the allegations were made, Dobrik released two different apology videos addressing his involvement in the situation. The first video, titled “Let’s Talk,” was uploaded to YouTube on Dobrik’s lesser-known podcast channel on March 16, 2021 and has since gained over 6.5 million views. In the video, Dobrik begins by referring to the vlog that was taken down per Hannah’s request.

“Consent is something that is super, super important to me,” Dobrik said in the video. “Whether I’m shooting with a friend or shooting with a stranger, I always make sure that whatever the video I’m putting out, I have the approval from that person. I also acknowledge that those times where a person can change their mind and they decide that they no longer want to be associated and no longer want to be in the video that I’m putting up, and then I’ll take the video down.”

The video, which was two minutes and 31 seconds long, received extensive backlash that led Dobrik to turn off the comments and release a subsequent apology video on his main channel. The second video, titled only by the upload date — 3/22/21 — was over seven minutes in length and has received over 10 million views.

The second apology video included a more in-depth apology from Dobrik that acknowledged the power his fame held over others included in his vlogs.

“I’m so sorry,” Dobrik said in the video. “I was completely disconnected from the fact that when people were invited to film videos with us, especially videos that relied on shock for views or whatever, it was that I was creating an unfair power dynamic. I did not know this before.”

Dobrik also gave an apology to Hannah and to the other people who had come forward against Zeglaitis.

“I’m sorry that I took Dom’s word for what happened in those certain situations and I didn’t believe you,” Dobrik said in the video. “And not only did I not believe you, but I made a joke of what kind of a person Dom was because I couldn’t wrap my head around a childhood friend of mine doing this to people and actually hurting people.”

Since the article and apology were released, Dobrik has faced a significant amount of criticism. Some members of the Vlog Squad have spoken out against him and he has lost sponsorships with brands, which funded many of his giveaways, including Hello Fresh, DoorDash and Seatgeek.

Butler student Jacqueline Stoltz, a sophomore marketing major, met Dobrik via Zoom last spring after joining a meeting he had briefly posted the link to. Stoltz said she had heard about the recent situation, but has not yet had the chance to watch his apology videos.

“It definitely made me look at him in a different light, I would say,” Stoltz said. “But it still sucks though, because he’s somebody that you look up to, and then you hear something negative and you’re like, ‘seriously?’ But then I also think [about the severity of] cancel culture and everything; but that doesn’t excuse his actions.”

Other Butler students such as Emmie Takada, a junior healthcare and business major, also said they attribute the situation to the rise in cancel culture.

“I think, especially these days, a lot of things are getting canceled, given there’s good reason behind them,” Takada said.  “It’s something that if you are going to be any sort of creator, you have to be very cautious of what you do. Or not even a creator, I guess. Just anyone who has people looking up to them, you know? You just have to be really aware of what’s going on at all times.”

Amidst the ongoing backlash and new developments, one thing seems indisputable: Dobrik’s career will never be the same. Fans like Koehring and Takada said they hope in the future that Dobrik and other creators can use his mistakes as a testimony to the importance of consent.