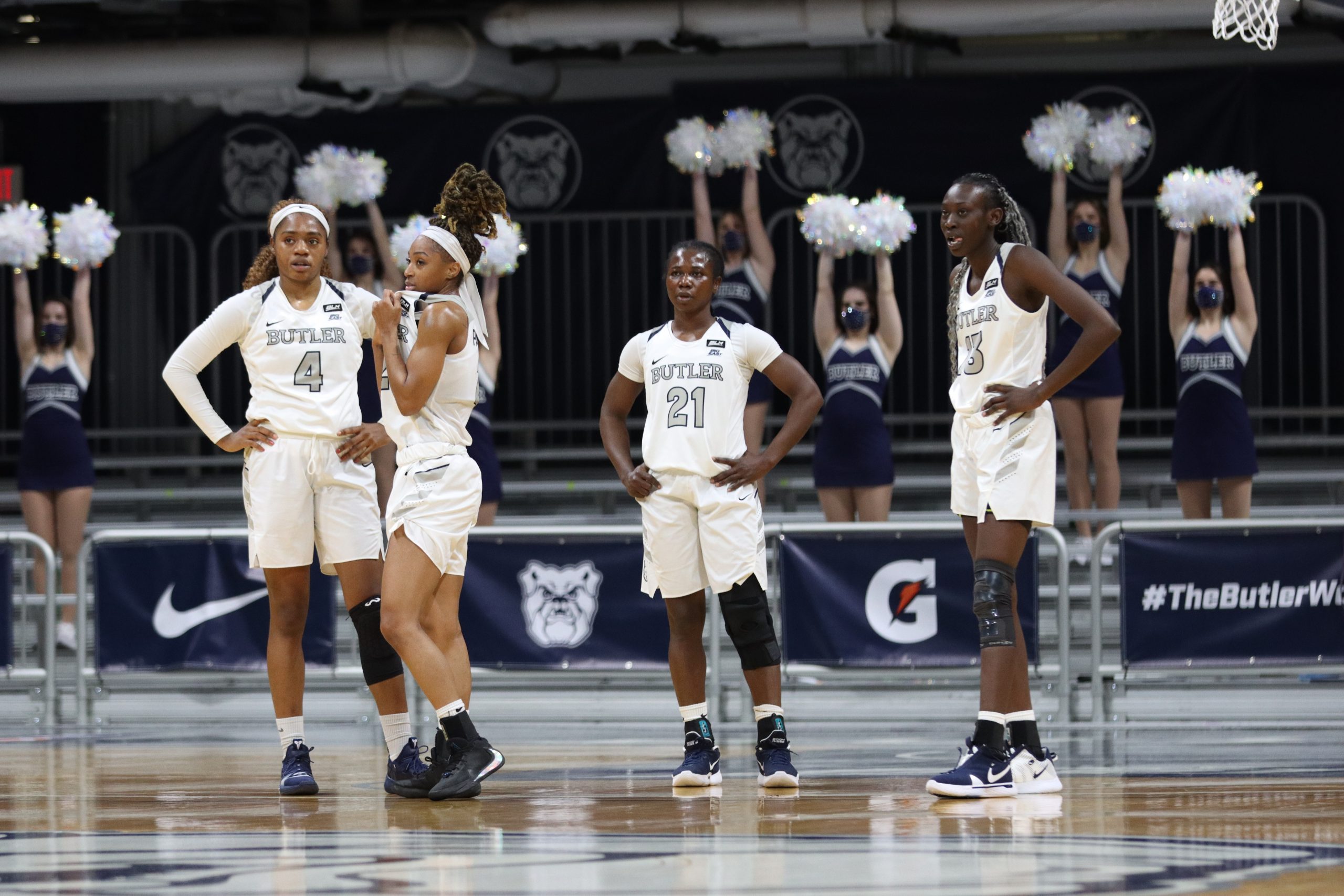 The Bulldogs take a moment to mull things over during the game versus Xavier on Feb. 22. From left to right: Okako Adika, Genesis Parker, Upe Atosu and Nyamer Diew. Photo by Xan Korman.

The Butler women’s basketball team is set to take on Providence in the first round of the Big East Tournament on March 5 at 2 p.m. The game will be held in Uncasville, Conn., in the Mohegan Sun Arena. The Bulldogs come into the game at 3-16 on the season, but with two wins in their last three games. Providence finished the regular season with a 6-13 record, losing their final five games.

The Friars won both matchups in the regular season, yet the last time they played was nearly two months ago, on Jan. 7. That second game – just the fifth of the season for Butler – was thrown together less than 48 hours before tip-off. Butler was originally planning for a home game versus DePaul and was forced to travel to Rhode Island on very short notice, which was likely a factor in their extremely slow start to the game; The Bulldogs were down 17-4 after the first quarter.

The Bulldogs lost the game 62-50, but if it wasn’t for such a slow start to the game, Butler outscored Providence through the rest of the game despite shooting just 31% from the field and committing 15 turnovers.

That game was also the first game of the season for senior guard Genesis Parker, who was just coming off an injury. She played 32 minutes in her debut but shot just 3-12 from the field for nine points. Now that Parker has had time to settle into her role, she has been much better and a key cog in both Butler’s offense and defense.

The first game between these two teams, played on Dec. 5 at Hinkle, cannot give much context for this one three months later. It was Butler’s season-opener, and redshirt-senior guard Naira Caceres started and played 34 minutes. Caceres only played the next game before opting out of the season due to COVID-19 concerns. In addition to not having Parker, guards Micah Sheetz and Emilia Sexton – Butler’s top two bench options – were also inactive.

Butler lost this game 73-52, with Providence guard Kira Spiwak going off for 28 points on 8-for-12 shooting from behind the arc. The Bulldogs should not expect that performance again, as it was double her 3-point percentage on the season.

Instead, Butler should be more concerned about the Friar Bigs. 6’3” junior forward Mary Baskerville had an excellent season which earned her All-Big East Second Team, the only player on either roster to be recognized this season. She has been excellent, averaging 13.3 points and 6.7 rebounds in 18 games, adding 33 block and 27 steals.

The Friars other big, 6’4” Alyssa Geary, will also be a lot to handle down low, and she also stretches the floor with her shooting. Geary is Providence’s third leading scorer behind Baskerville and Spiwak, but she turns the ball over more than any other Friar.

Channel Williams, the Friars senior 5’4” guard, is a difficult player to guard. Despite her small stature, she is extremely quick and shifty, as well as the team’s best passer. She shoots well from deep too, her 43% on 37 attempts is the best on the team.

On Butler’s side, it is unclear whether senior guard Jaia Alexander or junior forward Ellen Ross will play. Ross left the DePaul game after falling on her shoulder in the second half and was helped off the floor, clearly in pain. Alexander has missed Butler’s last four games with a foot injury, but head coach Kurt Godlevske said after the Xavier game on Feb. 22 that he expected her to return before the season ended.

Getting both players back for this game would be huge, as the pair provide interior presence needed against a lengthy Friar team. Alexander led the Bulldogs in rebounds this season, averaging 7.2 boards a game, and Ross was third on the team in blocks with seven. Alexander also averaged 9.4 points per game, good for fourth on the team.

The Bulldogs have managed to play well without Alexander over these last four games though, and a huge reason why is senior guard Upe Atosu. Atosu is known for her pesky defense, but over the last three games, has turned into Butler’s best scorer. She drives through the lane at ease and either takes an easy layup or kicks it out to Butler’s shooters on the perimeter, and every Bulldog that sees the floor can hit threes.

Freshman forward Nyamer Diew also has a big task ahead of her. Since rejoining the starting lineup, Diew has been great. In Butler’s last three games she has scored in double digits twice and recorded 11 blocks. This interior presence is necessary versus Providence, and now that Diew is a more seasoned player, she will cause problems down low for the Friars while stretching the floor on the other end.

Sheetz, Sexton and freshman point guard Tenley Dowell will all have big roles to play as well on both ends, but the Bulldogs are unlikely to win without good games from their top two scorers, Parker and Okako Adika. The pair have been very good on both ends all season, but this is a great opportunity for them to shine.

Adika has proven she can be a matchup nightmare for the Friars, when in her first Division I game ever, she dropped 29 points. Adika can score at all three levels at an efficient rate, and her combination of size and speed is a nightmare for defenses to deal with.

Parker has improved as the season has gone on, and over the last three games has averaged nearly 16 points per contest. She is shooting more confidently than she had earlier in the season, and if Parker gets hot from behind the arc, Providence will be in for a long day.