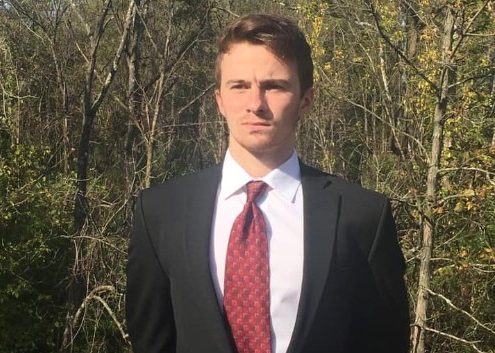 Tyler James was a man of many interests: a loyal member of Butler’s ROTC program, a video game enthusiast, a workout devotee, a history buff. More than that, he was a brother, a son, a friend, a student. The entire Butler community is mourning James after he passed away suddenly on March 10 at the age of 21.

Several members of the Butler community who knew James best described him as dedicated, compassionate and always willing to help out a friend. For Ryan Lavin, a junior political science major, a standout trait was Tyler’s loyalty to friends and family.

“He loved the people around him, more than anything,” Lavin said. “Every time I talked to him about his parents or his brother, he held them in the highest regard a son could hold his parents and his brother. He loved them dearly.”

Lavin will most miss having Tyler as a friend to talk about “anything” with, whether it be driving to physical training or scarfing down breakfast in Atherton Union.

“On a personal level, Tyler made me a better person,” Lavin said. “ … I’m thankful for the time that I got to spend with him and he’s gone way too soon. Now I’ll think about him every day for as long as I’m on this Earth, he just meant that much to me. I will try to live a more full life in his honor, I believe that’s what he would want.”

Lavin and fellow junior ROTC member Conor Maloney bonded with James in their three years together in the program.

Maloney, a political science and psychology double major, often carpooled with James to ROTC classes on IUPUI’s campus, as the program is in joint partnership with Butler. Maloney will always remember blaring punk 2000s music in those early morning car rides.

James joined the ROTC program in September 2019, and served as a leader in his platoon during his third year. Jeffrey Bottrell, a lieutenant colonel and military science professor at IUPUI, said Tyler was always available to help younger cadets in areas like rifle marksmanship or physical fitness exercises.

“He would often be seen during field training exercises smiling and telling jokes to fellow cadets to keep spirits up during difficult training events,” Bottrell said in an email to The Butler Collegian. “Although full of laughs, Cadet James constantly sought to improve himself and those around him.”

Tyler was determined to be an Army officer and was competing for active duty. Maloney said Tyler told him he wanted to go into the combat arms and serve on the front lines.

“He was a very confident kid, he was always very confident in the classroom and in his leadership traits for the younger kids to look up to,” Maloney said.

Tyler specifically excelled in his Military History course, according to Jake Young, an assistant professor of military science at IUPUI. As James’ professor, Young said he excelled in history, small group discussions and was specifically interested in World War II in the European theatre.

James excelled in his studies in Butler classrooms as well. As an international business major, he was working to complete the Lacy School of Business CORE curriculum, in addition to major-specific business courses from a global perspective.

Bill Templeton, associate dean of Lacy School of Business, was James’ academic advisor, and remarked that each semester Tyler mapped out coursework that would help reach his academic goals.

“My primary memory of Tyler is his seriousness of purpose in approaching his studies and his intent to enter into the military service,” Templeton said in an email to The Butler Collegian. “…He seemed very resolute and I admired his commitment.”

“I think Butler has a lot of people who embody the same traits that Tyler embodied, just good people is what I like to call them,” Lavin said. “People who are kind and generous and outgoing; people who want to see others succeed and don’t tear each other down; people who will stand behind you when you’re going through a hard time or people who push you to do your best. I think Butler is filled with those people, and I think Tyler James’ legacy will be ensuring Butler continues to produce those kinds of individuals and lead them through life.”

Donations in Tyler’s memory can be made to the Cincinnati Nature Center.