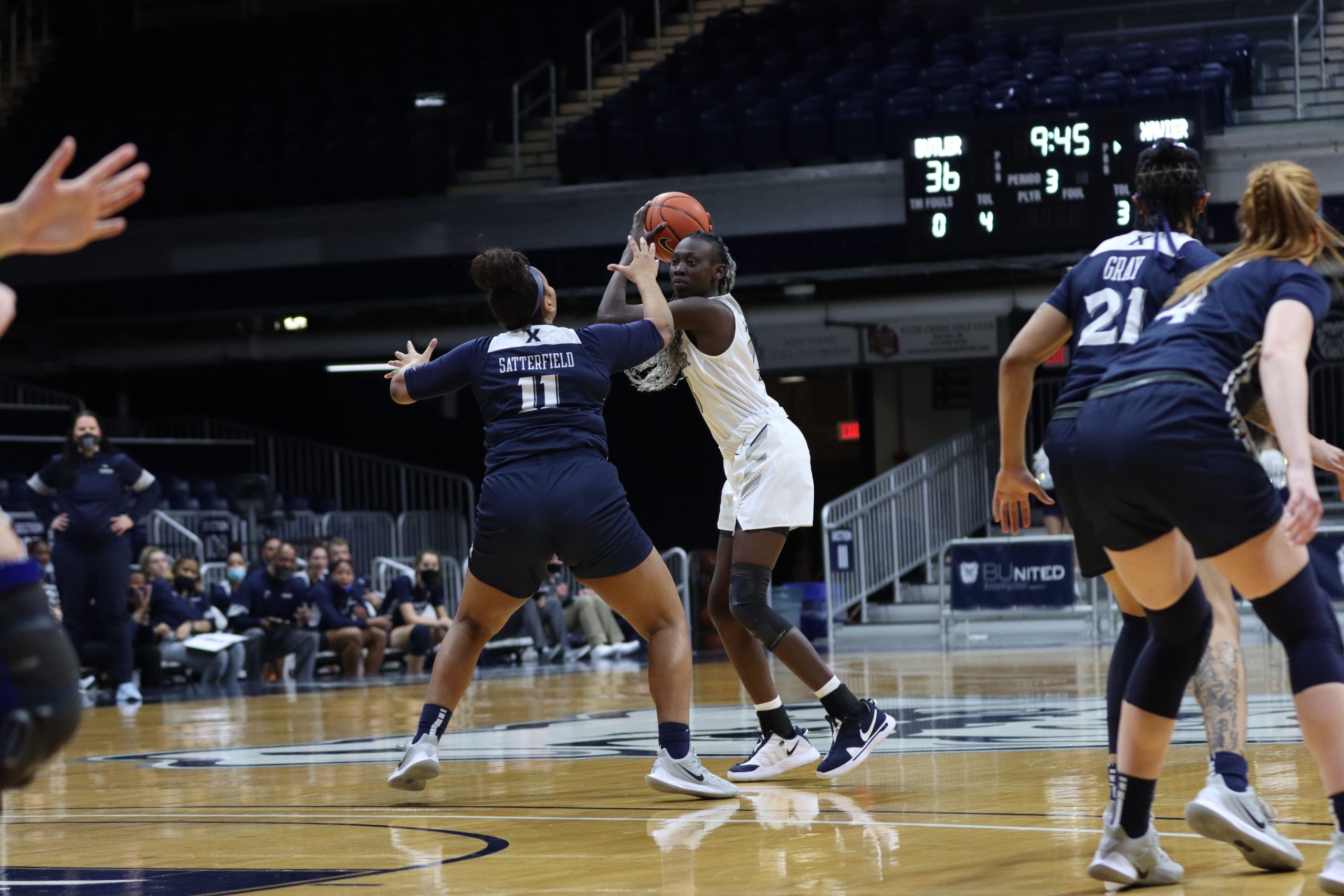 Freshman forward Nyamer Diew holds the ball at the top of the key in Butler’s win over Xavier on Feb. 22. Diew will face off versus her former AAU teammate and the top recruit in the 2020 class, Paige Bueckers, on Feb 27 on Butler’s senior night. Photo by Xan Korman.

Five days after picking up their second win of the season, the Butler women’s basketball team has their toughest matchup of the season; a date with the No. 1 ranked Connecticut Huskies on Feb. 27 at 4:30 p.m. UConn is 19-1 on the season, and has not lost a single game in conference play. Meanwhile, Butler comes into the game at 2-15 with just two regular season games to play.

Before the game, four seniors — Jaia Alexander, Upe Atosu, Genesis Parker and Micah Sheetz — will be recognized on senior night in their last game at Hinkle. Although, with the NCAA’s ruling that this season would not count against eligibility, all four players will have the option to return next season if they choose, so this may not be the end of their respective Butler careers.

Alexander has missed two games in a row, so it is unclear whether or not she will play today. However, after Monday’s win over Xavier, head coach Kurt Godlevske was optimistic about Alexander returning before the season was over.

This will mark the first time the UConn women’s program has played a game at historic Hinkle Fieldhouse, which is a major reason tickets for this game have been sold out. The women’s basketball record for attendance is 2,078 fans, set on Dec. 11, 2019, when No. 12 Indiana made the short trip over from Bloomington. Due to COVID-19 protocols, Hinkle can host 2,275 fans, meaning the women’s basketball Hinkle attendance record may be broken in the midst of a pandemic, an unbelievable thought to fathom.

In terms of the game itself, it is fair to say that the expectations of a Bulldog win are virtually nonexistent. Godlevske said he isn’t as concerned about the scoreboard as he is the team showing they can compete with the cream of the crop, and take that momentum into their last game of the regular season and on to the Big East tournament.

Freshman forward Nyamer Diew has been playing her best basketball as of late since being put in the starting lineup. Now, she faces off against a former AAU teammate, Paige Bueckers. Bueckers was the top recruit in the 2020 class, who as a freshman leads the Huskies in points, assists, steals and three-point percentage. It won’t be long before she is producing at a high level in the WNBA.

Although it is almost certain that the Huskies will win this game — they won the previous fixture at home by 68 points — if Butler can find some Hinkle magic it would be an all-time upset. Butler basketball found Hinkle magic last time a No. 1 ranked team visited, when the men’s team defeated Villanova on Dec. 30, 2017. If the women’s team can capture that same spark, it would be an even more impressive and improbable win. The idea of this upset, as well as the chance to see an all-time great coach in Geno Auriemma and his immensely talented, WNBA-bound squad, makes this a must-watch for Bulldog fans.

Following their clash with the Huskies, Butler’s last game of the regular season comes on a short turnaround, as they travel to Chicago to take on No. 24 DePaul on Monday, March 1 at 5 p.m.