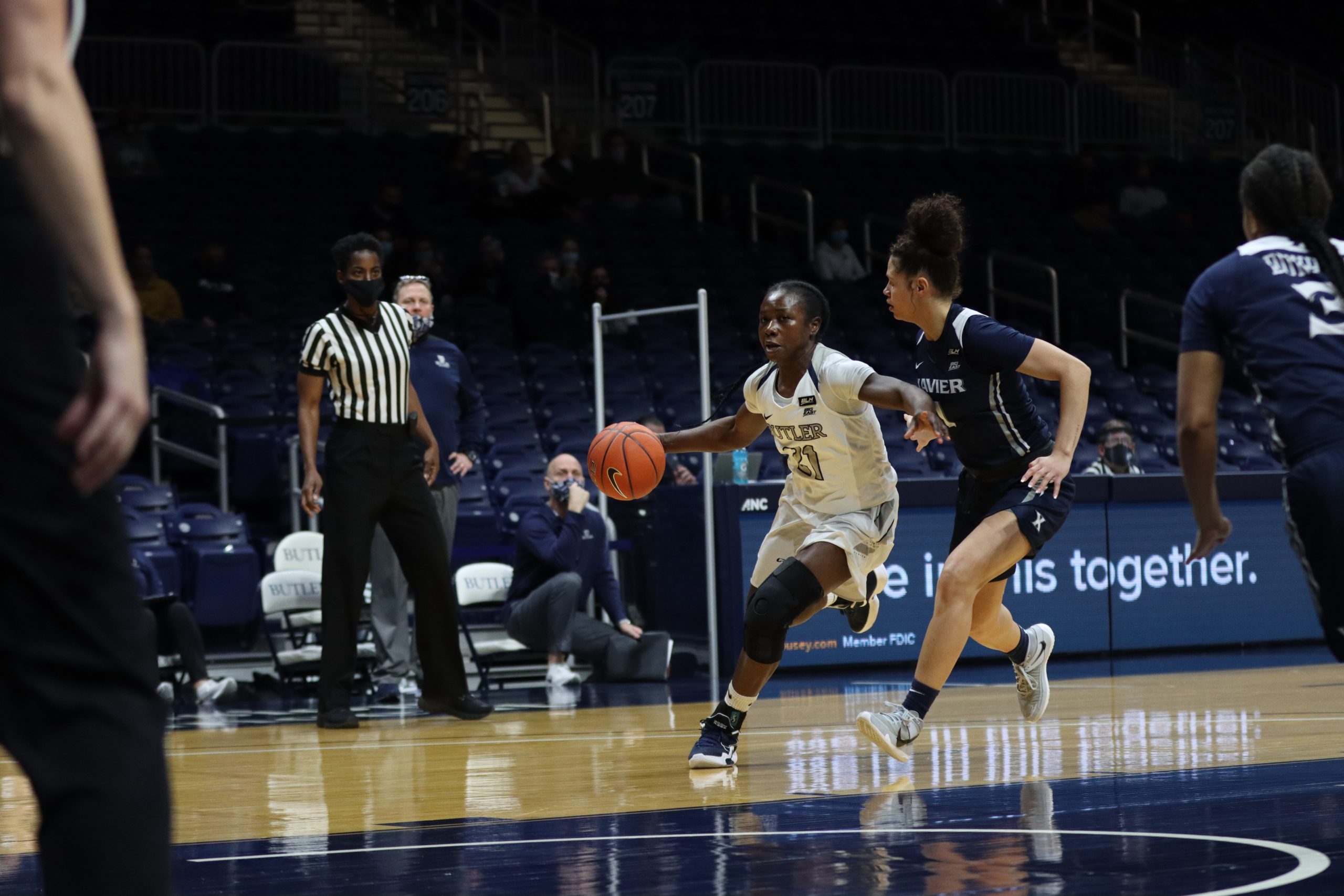 Senior guard Upe Atosu drives to the bucket versus Xavier on Feb. 22. Atosu led the Bulldogs with a career-high 23 points in the win. Photo by Xan Korman.

The Butler women’s basketball team defeated their arch-rival Xavier 73-61 on Feb. 22 at Hinkle Fieldhouse. It is just the Bulldogs second win of the season, as they improve their record to 2-14 in the Big East. Senior guard Upe Atosu led the Bulldogs with a career-high 23 points, and Genesis Parker added 18 of her own. Freshman forward Nyamer Diew also had a monster game, with 12 points, five blocks and four steals.

Head coach Kurt Godlevske was very happy with the team’s effort and said the team’s great second half performance versus Villanova last week helped bring momentum to this game.

“Very proud of my kids,” Godlevske said. “Proud of how much we’ve continued to grow. And it all stemmed from the last 20 minutes at Villanova, and it took two more weeks longer than I thought, but we’re building into what I envisioned that we could become. Just very proud and happy for the girls.”

Butler’s leading scorer on the season, junior Okako Adika, started off the game well for Butler, scoring the first four points as Butler was down 6-4 early in the game. With just over two minutes played in the game, play was stopped for an Adika leg injury, and she was helped off the floor. Fortunately, it appeared to just be a dead-leg situation, and she returned to the game with 3:16 remaining in the first quarter, with her Bulldogs down 18-13.

Adika turned out to be a spark for Butler, as the Bulldogs went on a 13-1 run to end the quarter. First, Parker hit a pair of free throws with two minutes left to bring her total in the quarter to 7. On the next possession after an Adika steal, she kicked it to Atosu who hit a three to tie the game at 18. Emilia Sexton stole the ball on the next possession and Adika hit a layup on the other end.

With a shade under a minute to play in the quarter, Xavier went one of two from the line. Just twelve seconds later, Diew hit a three off the assist from Atosu. On the last possession of the quarter, Parker dribbled down the game clock, drove into the lane, and kicked it to an open Atosu in the corner who splashed in the 3-pointer, giving Butler the 26-19 advantage at the end of the first.

Butler continued their momentum into the beginning of the second quarter. Parker hit a 3-pointer two minutes into the quarter, right after Xavier opened up the scoring with an A’Riana Gray mid-range jumper. Gray hit another jumper on the Musketeers next possession, but it was wiped out by a pair of Atosu free throws that gave the Bulldogs a 31-23 lead with 6:45 left in the half.

Parker with another triple to expand the BU lead to 29-21 pic.twitter.com/KdIHrEPIIQ

Over the next four minutes, Xavier locked Butler up on defense and got hot from beyond the arc. The Musketeers went on an 11-0 run thanks to three 3-pointers, two from redshirt freshman guard Nia Clark, one of them being a four-point play. This big scoring run gave Xavier a 34-31 lead with just over two minutes left in the second.

Butler was able to regain the lead, first with an Atosu layup and then a Sexton 3-pointer off an Atosu assist.

Atosu gets her own miss and kicks it to the corner for a Sexton 3 pic.twitter.com/cIjYFRHpke

That lead, however, was short lived as Xavier hit a three of their own just before halftime to go into the break with a slight 37-36 lead.

Butler had a strong start to the second half, holding the Musketeers without a field goal for the first seven and a half minutes of the third quarter. Their defense led to good offense too, and Butler went on a 14-1 scoring run to take a commanding 50-38 lead, capped off by Atosu’s third three of the game.

After not getting anything going offensively through most of the quarter, Xavier started getting into their groove in the last three minutes. The Musketeers finished the quarter on a 9-2 run to tighten up the game heading into the final frame, 52-47.

With a pair of free throws, Xavier cut the Butler lead to a single possession. Over the next minute and a half, Butler went on a 10-0 run that would seal the win. Atosu was fouled on a 3-point attempt and hit all of her shots from the line, Tenley Dowell and Parker hit layups and Adika hit a three to cap off the game-winning run.

Great game at Hinkle. Parker here with the baseline drive for 2 pic.twitter.com/GGL7jdrwLG

Both teams traded buckets in the last eight minutes of the game, and Xavier would not get closer than an eight-point deficit for the rest of the game.

Butler played well offensively, but their defense drove them to a win. The Bulldogs forced Xavier to shoot under 33% from the field, forced 14 turnovers and blocked six shots. Godlevske said his team stuck to their principles and played fundamentally sound zone defense, letting non-shooters shoot and containing drives. However, he said the way they pushed the tempo was the key to success.

“I think really the key that led to a lot of defensive success was just the way we pushed the tempo when we got stops, and I think we kind of took their legs a little bit in the second half,” Godlevske said.

The Bulldogs will have a tough time extending their winning streak to two, as their next game comes against No. 1 Connecticut. Head coach Geno Auriemma, the 11-time National Champion and three-time Olympic Gold Medalist, and the Huskies will be making their first-ever trip to Hinkle Fieldhouse, a game that is sold out. Godlevske said he is not as concerned with winning the game as he is showing they can compete with the best.