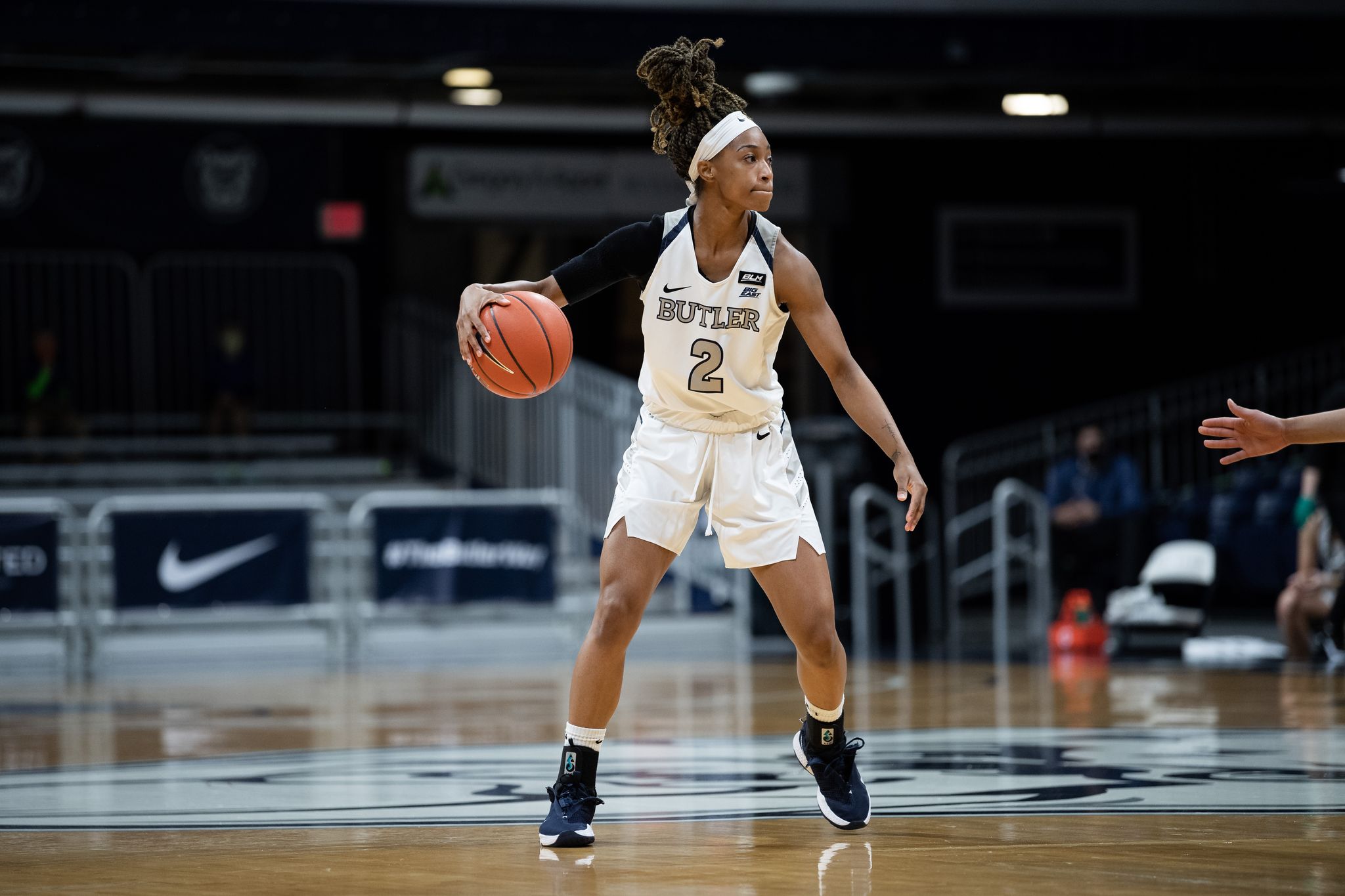 Genesis Parker sets up the offense in Butler’s game versus DePaul earlier this season. Parker scored seven points in the Bulldogs’ loss at Villanova on Feb. 16. Photo by Zach Bolinger.

The Bulldogs’ offense was not the problem as the game got under way, however, the defense was a major issue. In the first meeting between these two teams on Jan. 31, Villanova scored 30 points in the first quarter. The Wildcats matched that score with two minutes left to play in the first quarter of this game.

Butler could not have asked for a better start, as Adika knocked down a three from the corner on the first possession. Yet the Bulldogs found themselves down big early, as Villanova went on a 15-2 run over the next three minutes of play. The lone Bulldog bucket came on a second-chance layup from freshman Nyamer Diew, who made her third consecutive start.

The Wildcats hot shooting didn’t end in the first — they got even hotter. With four minutes to play in the second quarter, Villanova had hit 13 3-pointers — five from sophomore star Maddy Siegrist — on just 22 attempts. It seemed as if every time Butler did something positive offensively, Villanova went right down the floor and cashed in another triple. By the end of the first half, the Wildcats hit 16 threes on 26 attempts, an unbelievable 61.5% from deep. For some context, their school record for 3-point makes in a game is 18, and they nearly hit that many in a single half. Butler was outscored 35-7 in the second quarter and trailed 67-26 at half.

Butler’s perimeter defense was obviously somewhat to blame, but Villanova’s ball movement was mesmerizing. The Wildcats moved the ball with precision throughout the first half, capitalizing on every slow Bulldog switch. They assisted 22 of their 24 buckets and recorded more assists than rebounds. They nearly recorded as many assists as Butler had points in the first half.

In addition to Butler’s poor defensive play, the offense stalled in the second quarter. They shot just 31% from the field and 21% from deep in the first half and turned the ball over 10 times. Villanova capitalized on Butler’s sloppy play, outscoring the Bulldogs 14-0 on the fast break.

As if the half couldn’t get worse, Diew came out of the locker room with an ice pack around her left hand and didn’t see any time in the second half. Everything that went wrong in the first half for Butler is representative of this whole season and the mountain of adversity they have faced.

Butler came out of the break playing much better basketball. They outscored Villanova 15-11 through the first five minutes of the half and did not allow the Wildcats to hit another three over that stretch. Their perimeter switching was noticeably better, but their interior defense took a hit with the loss of Diew, and Villanova took advantage attacking the paint. The Bulldogs drove to the basket far more in the third quarter as well, scoring all of their points from either the paint or the free throw line, besides a Genesis Parker 3-pointer.

Still down big, trailing 44-81, Atosu hit a deep 3-pointer from the top of the key. Just seconds later, Villanova’s Sarah Mortensen hit her third three of the game and the team’s 17th, one away from tying their school record. A minute later, freshman Abby Stoddard hit her first 3-pointer of her career for Butler, to cut the lead at the end of the third to 86-50.

Butler deserves a lot of credit for their effort in the third quarter and the second half as a whole. After the drubbing they took in the first half, it would have been easy to mentally check out and go through the motions. Instead, they came out and played a complete quarter, outscoring the Wildcats 24-19, and minimizing the damage of a scorching hot team. The Bulldogs showed they are a team that cares about giving their best effort no matter the circumstances — a commendable attribute.

The Bulldogs continued to play well through the fourth quarter. They outscored the Wildcats 24-12 in the final frame and held Villanova scoreless over a four-minute stretch in the middle of the quarter. Butler finished the game on an 11-2 run, making the final score look much more respectable than it could have been.

Although there is a lot to celebrate about the second half performance, Atosu left the game late in the fourth with a trainer holding her arm. The Bulldogs simply cannot catch a break.

Butler returns to action at Hinkle Fieldhouse on Monday, Feb. 22 at 6 p.m. versus archrival Xavier.