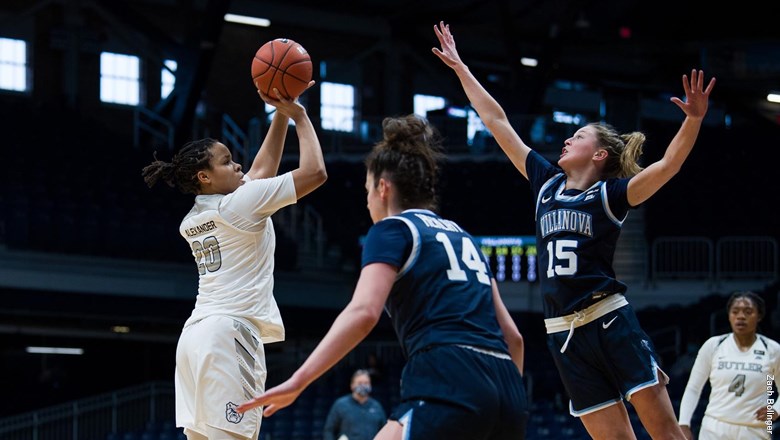 Jaia Alexander fires a shot over a Villanova defender in the Bulldogs’ 90-53 loss at Hinkle Fieldhouse on Jan. 30. Alexander co-led Butler with 14 points. Photo by Butler Athletics.

The Butler women’s basketball team lost to Villanova, 90-53, at Hinkle Fieldhouse. Villanova improves their record to 10-3 and Butler falls to 1-12. Jaia Alexander and Okako Adika led the Bulldogs with 14 points each. Maddy Siegrist led the Wildcats with 26 points and 10 rebounds.

The Bulldogs did not perform at their best in the first quarter, as they found themselves down 30-11 after just ten minutes of play. Villanova jumped out to a quick 8-2 lead, with Raven James and Siegrist both hitting 3-pointers. Alexander scored the lone Bulldog bucket, hitting a mid-range jumper, a shot that has been going in for her as of late. Over Butler’s next two possessions, they left two points on the board, as both Alexander and Genesis Parker missed one of their two shots from the line.

Up 10-4 with about four minutes gone in the first, Villanova began a run to give them a lead they would not give up. The Wildcats poured in 18 points over the next five minutes, only allowing the Bulldogs to score four — an Adika layup and a layup from Micah Sheetz after a smooth spin. Parker hit a pullup three with 30 seconds left to cut into the big Wildcat lead, but Villanova’s Brianna Herlihy made a jumper right before the buzzer to give them a commanding 19-point lead after one. Butler’s defense was poor in the first quarter, allowing Villanova to shoot 75 percent from the field (12/16) in the first.

The Bulldog defense had a better second quarter, shutting out the Wildcats for the first four minutes of the second quarter. Unfortunately, they weren’t able to capitalize as their only points over that stretch came off a jumper from Alexander. Villanova broke their scoreless run on their next possession with a Lior Garzon three. The rest of the quarter was back and forth, with both teams trading layups, two-point jumpers and free throws. Alexander hit two jumpers in the back half of the second quarter, with Adika, Emilia Sexton and Sheetz all adding two apiece. Villanova slightly outscored the Bulldogs, thanks to two easy layups with under a minute to play, giving them a 45-23 lead at halftime.

Butler took a big blow late in the first half when leading-scorer Parker was removed from the game after seemingly taking an elbow to the face and bleeding near her eye. She did not return for the rest of the half and was not on the bench to begin the second half. The Bulldog defense wasn’t great in the first half, leaving their opponents open near the basket, and Villanova took advantage, scoring half of their points in the paint. Butler also only forced three turnovers, coughing up eight of their own, and did not record a block.

With the Bulldogs leading scorer out, it was time for their other two offensive studs — Alexander and Adika — to step up. The pair did just that and scored or assisted on all of Butler’s ten points in the first three and a half minutes in the half. Adika scored 12 seconds into the half and converted an and-one a couple minutes later. She also assisted a Nyamer Diew layup, in Diew’s first appearance since Butler’s win over Georgetown on Jan. 13. Despite Adika and Alexander keeping up the scoring, the defense continued to struggle. The Bulldogs were down 57-33 with six and a half minutes left in the third, and the Wildcats continued to pile on. They went on a 15-4 run over the remainder of the quarter to give them a commanding 72-37 lead after three quarters.

Some good news for the Bulldogs came when Parker returned from the locker room still in her uniform, with cloth covering the spot where she was hit. If the game was closer, it seems like she could have returned, but with Butler down big, there was no point to risk it.

The fourth quarter saw both teams turn to their benches for the home stretch, with the game too far out of reach for Butler to come back. The Wildcats outscored Butler 18-16 in the final period, giving them the 90-53 win.

The Bulldogs return to action next Monday, Feb. 8 on the road versus archrival Xavier, in a must-win game if the Bulldogs are to improve their place in the Big East.