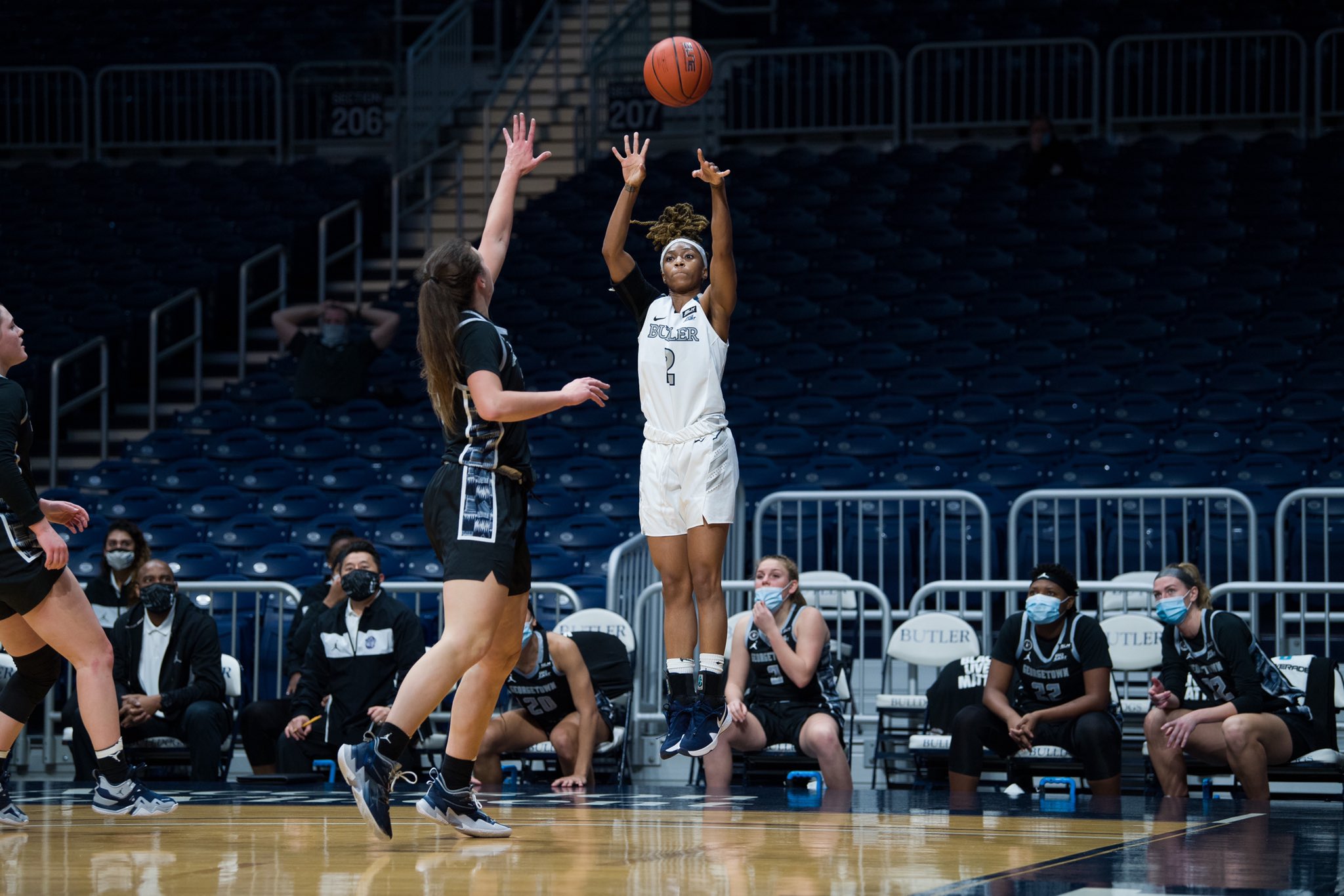 Genesis Parker shoots a 3-pointer in a game earlier this season. Parker scored 15 points in the Bulldogs’ loss at No. 3 UConn on Jan. 19. Photo by Butler Women’s Basketball on Twitter.

In the first meeting between the two programs, the Butler women’s basketball team fell to No. 3 UConn 103-35. Butler’s two leading scorers Okako Adika and Genesis Parker combined for 33 points; Adika notched 18 and Parker had 15, and both Bulldogs hit three 3-pointers. All five starters for the Huskies scored in double digits.

The Bulldogs offense played well in the first quarter, with Okako Adika and Genesis Parker combining for all 15 of Butler’s points. Adika gave Butler the early lead with a layup on a pass from Jaia Alexander, but the Huskies took the lead back quickly with a 3-pointer from Evina Westbrook. This sparked a 10-2 run for the Huskies, with the lone Butler bucket coming from Adika.

Down by six, Parker dribbled up the floor and pulled up for a three, cutting the UConn lead to three with four minutes left in the first. Over the next two and a half minutes, the Huskies and the Bulldogs traded misses and turnovers, with Adika and UConn’s Aubrey Griffin scoring the only two baskets.

With three minutes left to play in the first, Griffin hit a jumper and Butler was given a technical foul immediately after. The Huskies hit both of their free throws and then a jumper five seconds later to cap off a 6-0 run with a mere six seconds taken off the clock. On the Bulldogs next possession, Adika made a three on a pass from Tenley Dowell to cut the lead to 18-12. In the last two minutes of the quarter, the Huskies scored seven points and the Bulldogs scored three—a Parker and-one—giving the Huskies a 25-15 advantage.

The Huskies outscored Butler 20-5 in the second quarter, with all five Bulldog points coming from Adika. The Husky defense dominated the first half, forcing 17 turnovers and turning those into 24 points on the offensive end. By deploying an aggressive defensive scheme, Connecticut took advantage of Butler’s turnover problem. Butler turned the ball over more in the first half than they average per game this season (16.7). UConn also dominated in the paint, scoring 24 of their 45 points in the painted area.

Another problem that the Bulldogs ran into in the first half was fouling, as both Adika and Alexander picked up three fouls a piece late in the half. This forced both players to be less aggressive on defense.

UConn freshman point guard Paige Bueckers, who was the number one recruit in the 2020 class, hit a 3-pointer ten seconds into the first half. Adika went one of two from the line after being fouled on the next possession, and then UConn went on a quick 7-0 run before Adika hit her third 3-pointer of the night.

About a minute later, Adika picked up her fourth foul, forcing Head Coach Kurt Godlevske to sit his best scorer for the remainder of the quarter. The Huskies took advantage of her absence, outscoring the Bulldogs 21-6 over the final six minutes of the third. Parker scored four of the points for Butler. With less than two minutes left in the third, the freshman Dowell became the first Bulldog not named Adika or Parker to score on the stout UConn defense.

The fourth quarter was more of the same from the two teams, as it became more and more clear that the Bulldogs were outmatched. They were outscored 25-5 in the final frame, with Parker scoring all five points for the Bulldogs from a 3-pointer and a nice layup through contact.

It is always tough to take a loss like this, but the Bulldogs should not feel too bad after losing to a dominant team like UConn.  Auriemma’s Huskies are not just one of the greatest women’s college basketball programs ever, they are one of the great dynasties in all of sports. It’s hard to take positives from a game with a scoreline like this one reads, but UConn is simply on a different level than the vast majority of basketball programs, and when they are on their game like they were tonight, they’re nearly impossible to beat.

Butler has a quick turnaround as they play No. 18 DePaul at Hinkle this Thursday, Jan 21., at 7 p.m.