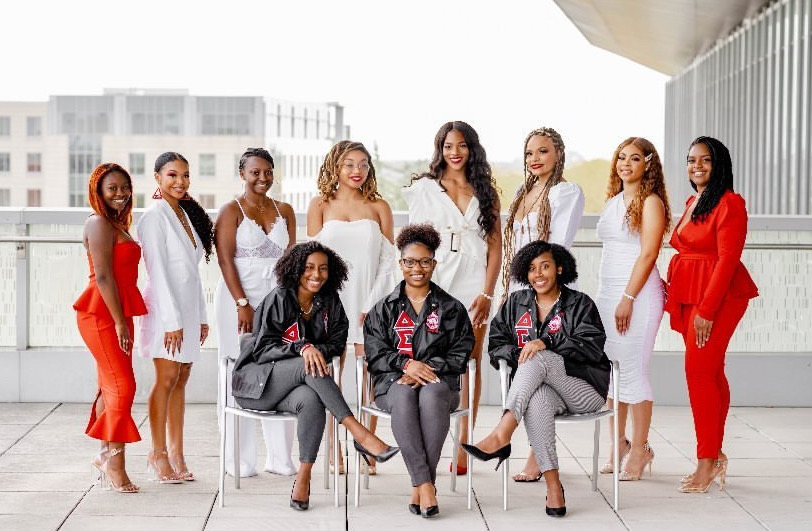 Founded in 1913, Delta Sigma Theta has continued its sisterhood, scholarship and service for over a century. Photo courtesy of Tyshara Loynes

Delta Sigma Theta, or Delta, is a predominately Black sorority founded in 1913 at Howard University. Founded by 22 collegiate Black women, the organization’s goals were to “promote academic excellence and provide assistance to those in need,” according to their website. The organization’s first public act was in March 1913, when founding members marched with suffragettes to protest for women’s rights.

Despite racial inequality and Jim Crow laws, the founding members of Delta Sigma Theta sought to create equal opportunities by emphasizing their values of sisterhood, scholarship and service for its members and the world around them.

Over a hundred years since their founding, members of Delta Sigma Theta have continued their fight for the rights of the Black community.

Jordan Stewart-Curet, a senior marketing and digital media production major, has been a member of Delta Sigma Theta since the fall of 2018. Looking back at her first year at Butler, she said she was looking for a community that “felt right,” which she eventually found within Delta.

After meeting and forming connections with Black upperclassmen at Butler, she said she began to realize that organizations in the National Pan-Hellenic Council, or the Divine Nine, offered a space where she could thrive and belong.

“I made a decision that on-campus sororities and fraternities weren’t necessarily the right thing for me and didn’t reflect who I was,” Stewart-Curet said. “I started to hang around the members of [Chi] chapter and at that point, when I did, I loved who they were and that their organizations were service-bound and really in touch with serving the Black community.”

Chyna Clark, a junior dance major and current president of the Chi chapter of Delta Sigma Theta, said she had similar pre-initiation feelings. She said she knew some members, admired their empowerment and outspokenness, and decided to apply for membership.

“Before I even knew that [my friends] were Deltas I noticed how amazing they were and how they were such leaders on their campuses,” Clark said. “As I learned much, I also learned that some of my favorite women, Shirley Chisholm, Fannie Lou Hamer, even some of my favorite actresses are Deltas and changemakers within the world, so I thought it was really special… I knew that I wanted to be around like-minded women who had the goals and passion for our community.”

But becoming a Delta is not simple, according to the Membership page on Delta’s website. The website says members must have a 2.75 GPA, and that the rest of the details of the process will be shared during the scheduled rush activities.

One of Delta’s three founding principles, scholarship encompasses promoting academic excellence and providing financial support to individuals in need. As of July 2019, the organization has donated $5,600,000 in scholarships and grants according to the homepage of Delta Sigma Theta’s website.

Once invited to membership, Delta Sigma Theta members must keep up with events and stay up to date with what the community needs, according to the Service tab on the website.

“It’s so special to be able to have an organization where I’m constantly empowered, pushed and motivated by all these beautiful Black women,” Clark said. “Being able to feel like I’m able to achieve my goals, reach my goals and do anything I want to do, because of the sorors I have and the people that have come before me, and how much they’ve achieved in their lifetime.”

Sisterhood does not only mean a bond between fellow members of Chi chapter, however. From historical figures to current members to the 900 Delta chapters all over the world, Delta’s sisterhood transcends borders and time, Loynes said.

From political leaders like Shirley Chisholm, Lucy McBath, Keisha Lance Bottoms and Marcia Fudge to icons in entertainment like Cicely Tyson and Angela Bassett, Loynes said she is “grateful to continue on that path and set the same standard that [these women] started.”

Sisterhood to Stewart-Curet means resilience, accountability and strength. When Stewart-Curet was looking for an organization her first year at Butler, she was searching for a place of belonging, which she said she found with Delta.

“It taught me a sense of resilience and grit that I don’t know if I would have gotten as quickly if I hadn’t been a part of the organization, just like a group of women that can hold me accountable that way,” Stewart-Curet said. “It’s made a lot of my feelings and beliefs and values consecrated and that has played a huge role in my outlook and experiences overall with college.”

For individuals who are on the fence about joining Delta Sigma Theta, Clark, Loynes and Stewart-Curet agreed that the most important thing to do is to “do your research.”

“That’s something we often say, and I mean it seriously,” Stewart-Curet said. “Do your research. It’s a lifetime commitment, it’s something that is serious. [Delta Sigma Theta] was built when we weren’t able to be a part of sororities and fraternities, it has a deep significance to the environment and culture that is created.”